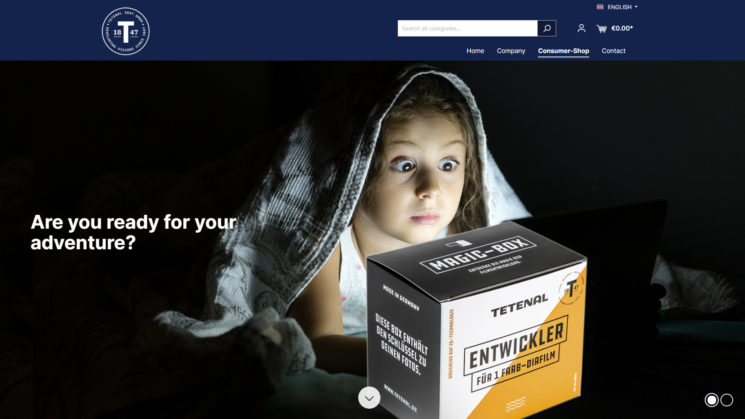 TETENAL’s been in the film developing business since 1847 and almost all of the world’s other developing companies have relied on them during that time.  They’d been having trouble (at least publicly) since the end of 2018 when they were desperately seeking help to avoid bankruptcy. The following month, they declared that they would be shutting down.

It looked like they might disappear forever, but by November, things were looking up. The company was rescued by a management buyout and now they’re back, they are focused, and they have visions – so their website says. They also have a shiny new online store.

To celebrate the relaunch, TETENAL is offering a 5% discount with the code tetenalpromo09 for the rest of September. The new online store also includes a bunch of new black & white chemistry for sale including developer for both film and paper, stop bath and fixed, toners, stabiliser, wetting agents and more. They even have emulsions for wet plate photography.

And while they’re not quite available just yet, they also have a placeholder for their Developer Tablets announced last year. TETENAL was producing tablets up until the turn of the century, but it’s taken them a while to adapt and bring them back to a modern market. But tablet form developer should extend the shelf life dramatically and it means they’ll take up much less storage space for the amount of rolls they develop vs liquid chemicals or powder packets.

So, if you’ve been needing chemicals, head on over to TETENAL’s new online store. And don’t forget that promo code!