Hi, this is Jay P Morgan. Stop shooting on manual. This is when you should use auto ISO. That really comes into play when I’m doing sports, I want to stop children, I want to stop something that’s flying around really fast I go to auto ISO. 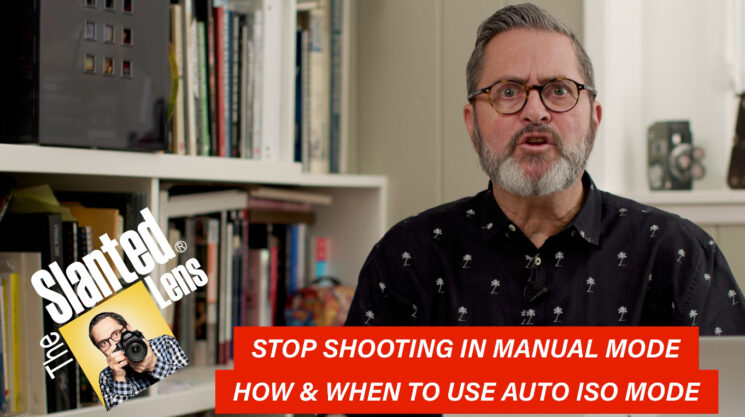 Now remember I’ve always said “Don’t let your camera control two of the exposure triangle. Only let it control one.” So in this case I would set my shutter speed, I would set my aperture and then I would let the camera choose the ISO. This gives you a lot of flexibility as you’re shooting as things are moving really quickly into shadows, out of shadows, as the background becomes dark and light. It allows your camera to follow the action and to give you a really good image. So let’s look at some settings. 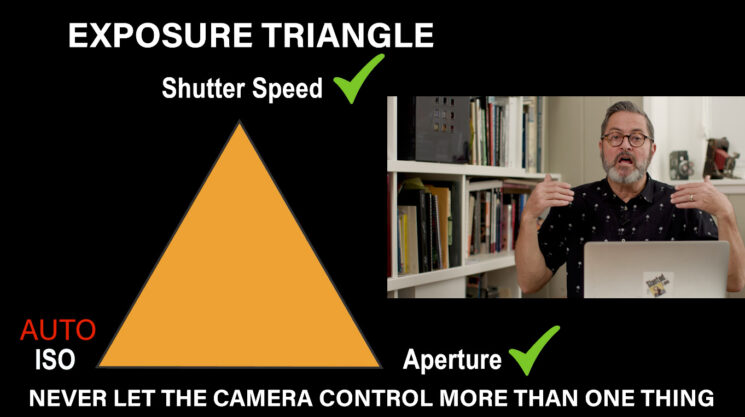 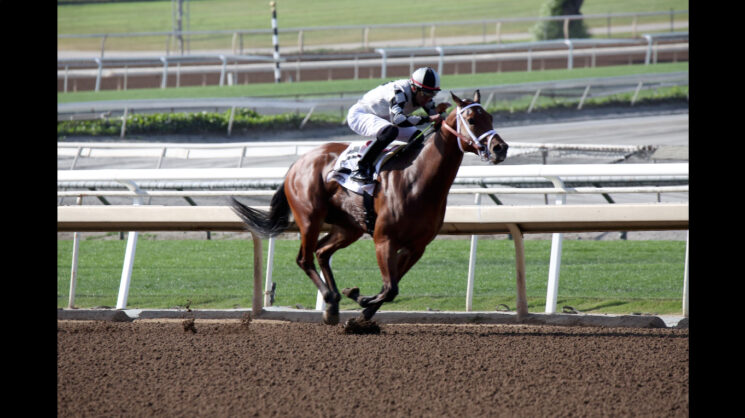 When I’m shooting horse racing here you notice at the bottom I’m at 1/2000 of a second and f/9. Why did I choose f/9? Because there were so many horses stacked up I felt like at f/4 I was just getting one rider and everyone else was way out of focus. I’m at 2500 ISO. 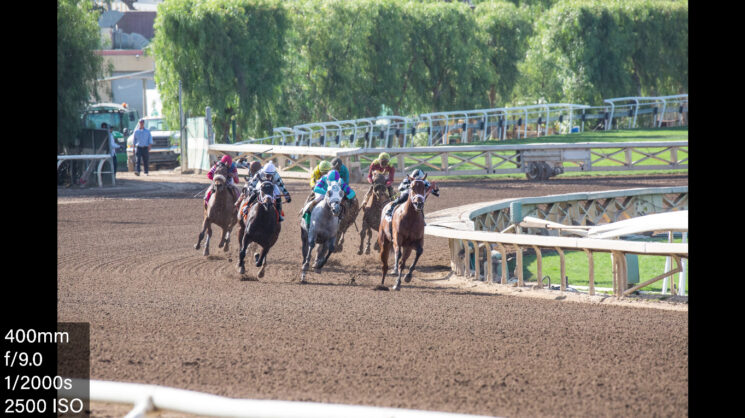 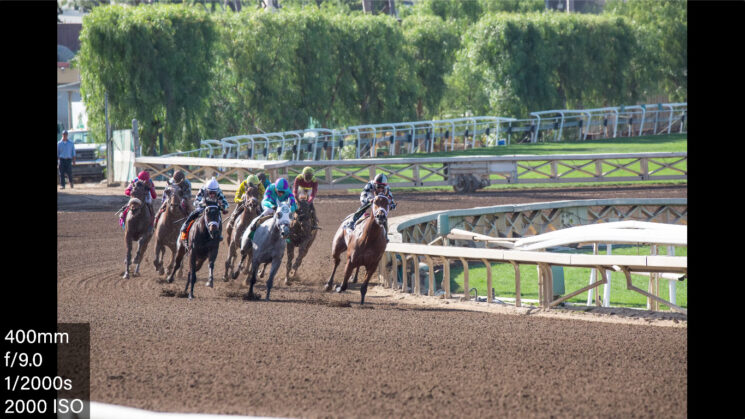 Then I go back to 2000 ISO. I mean they’re off a little bit, the exposure is off just a little bit and it’s going to be. You’re never going to hit this exactly right. 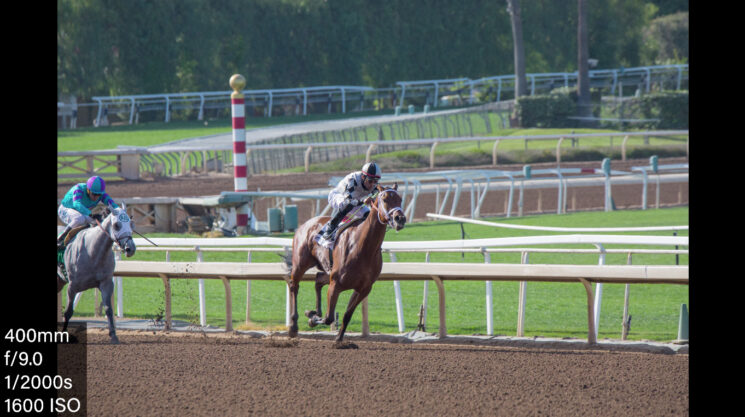 They’re not all going to look perfectly the same. You’re going to have some that are a little more overexposed and some a little bit underexposed. But they’re within a perfectly acceptable range to be able to get great images. Any single one of these goes to 1250, 2000, 1600 ISO. 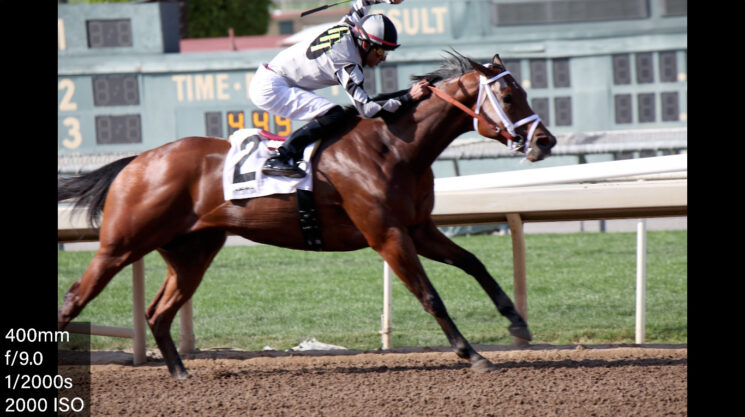 So it never really got below a thousand as I shot as they went through. But it’s following the action and it’s allowing the exposure. I tried this just setting this at 1000 iso and some of them are way bright and some are way dark. I got closer on the exposure when I was using that auto ISO than I did when I just chose an ISO and followed the action. Because they’re moving through dark backgrounds and light backgrounds. 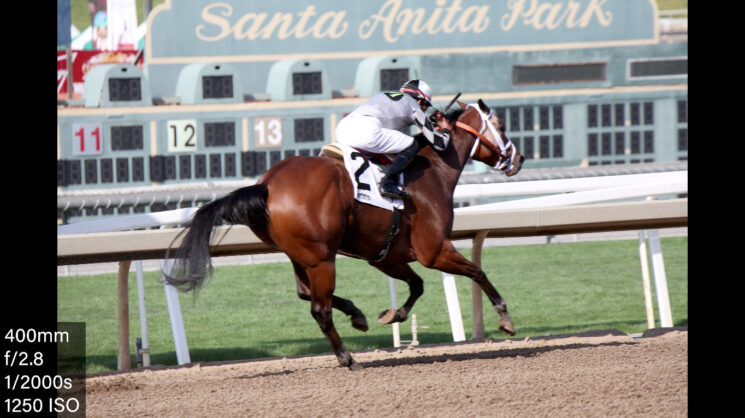 The horses themselves are going into lighter situations and darker situations. So when I chose an ISO there weren’t as many images that were acceptable as when I used auto ISO. And that’s the reason I do it. 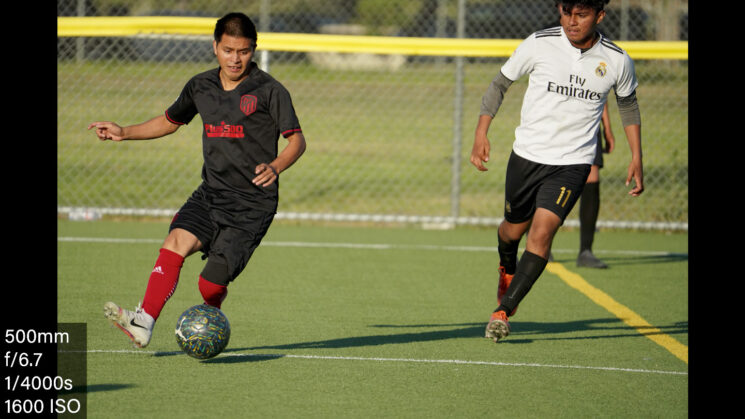 So let’s take a look at some of the soccer images. I’m shooting outside. I’m at 1/4000 of a second and I start off at auto ISO. 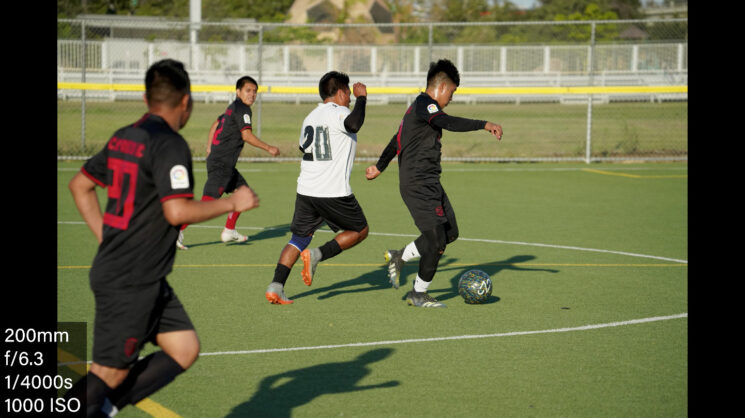 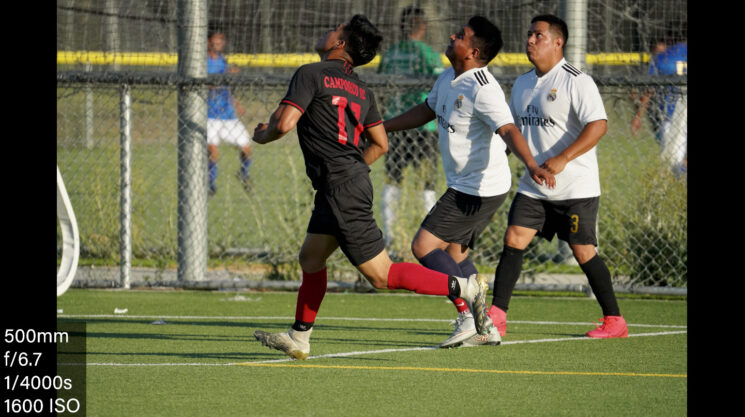 It’s just jumping around. Somewhere between 1000 to 1250 ISO there’s more players in the shot which becomes a little darker image. 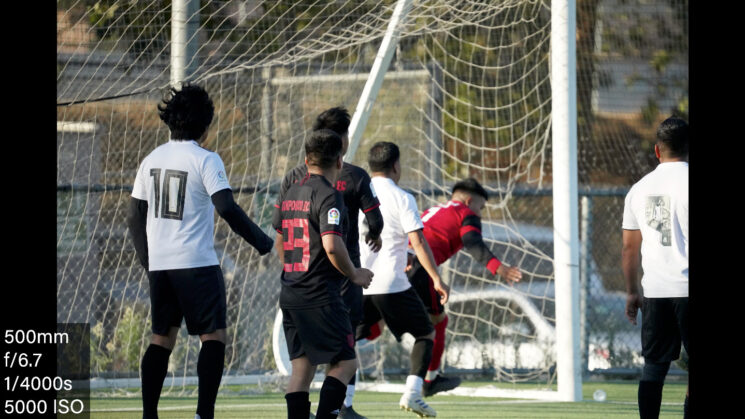 That went to 5000 there as I’m looking across the field. So the ISO is just staying with them. But really most of the time it’s trying to keep you down as close as possible to 1000. 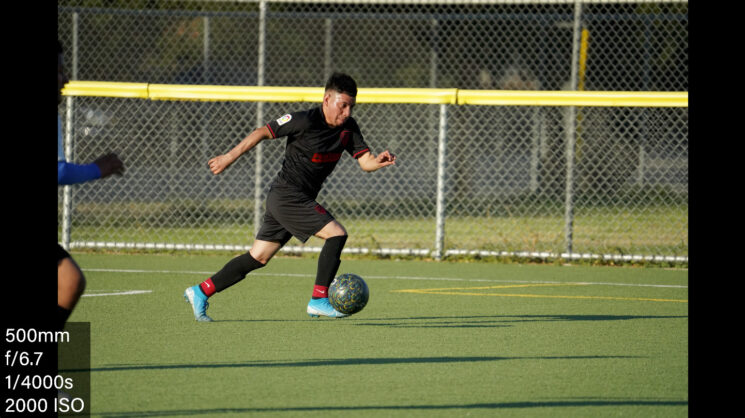 It’ll get right back to 1000 ISO when it can. But it’s just going to keep going up and down and somewhere it jumps up to 5000 ISO when it needs to. But most of the time it’s trying to stay pretty close to 1000. 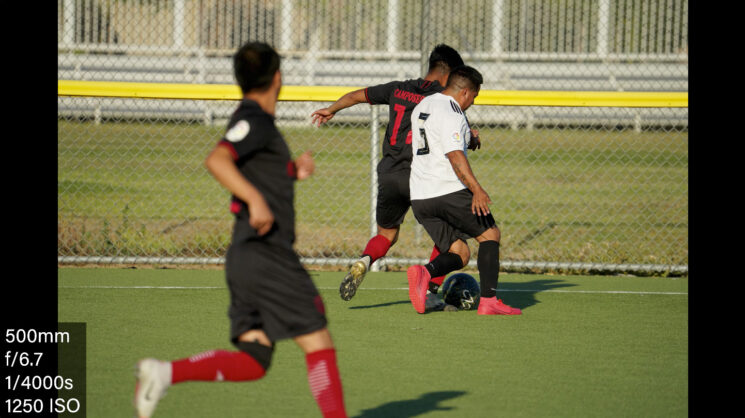 Using auto iso is really the easiest way to get good images when you’re doing sports. 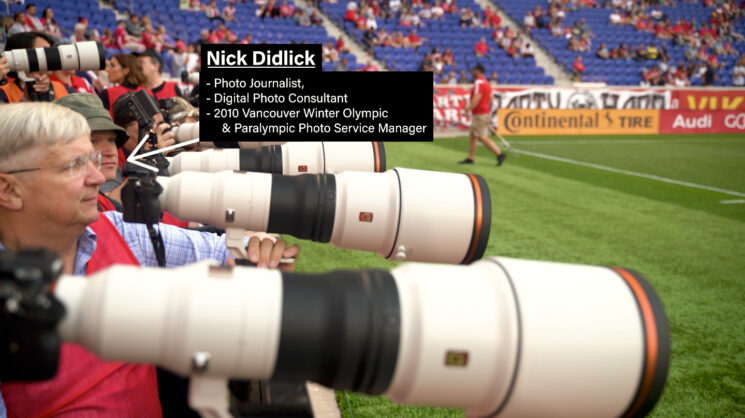 When I sat next to Nick Didlick he was always on auto ISO because he knew what it took to freeze the action. He knew what aperture he wanted to blur the crowd in the background. 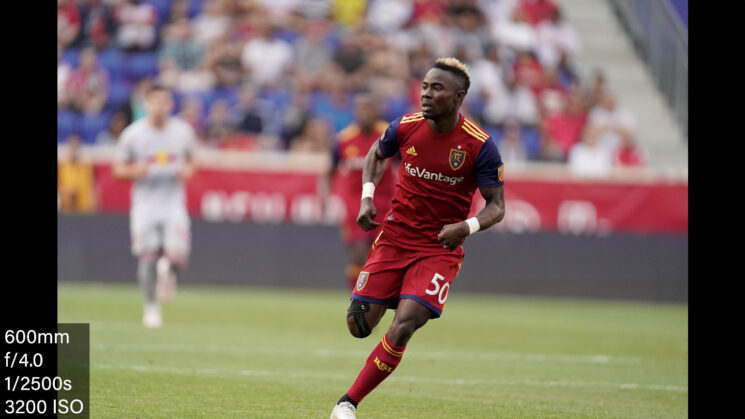 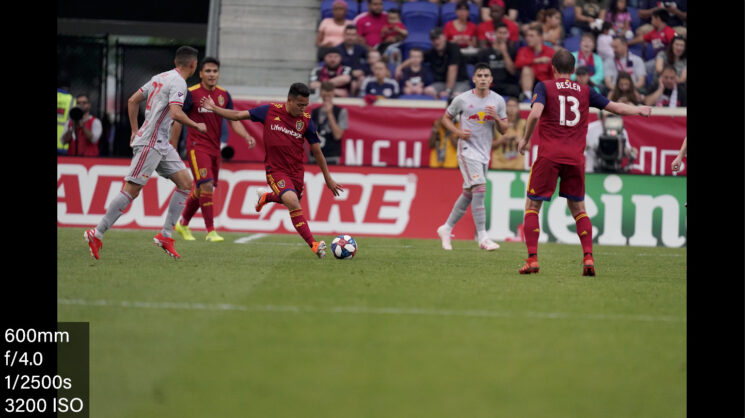 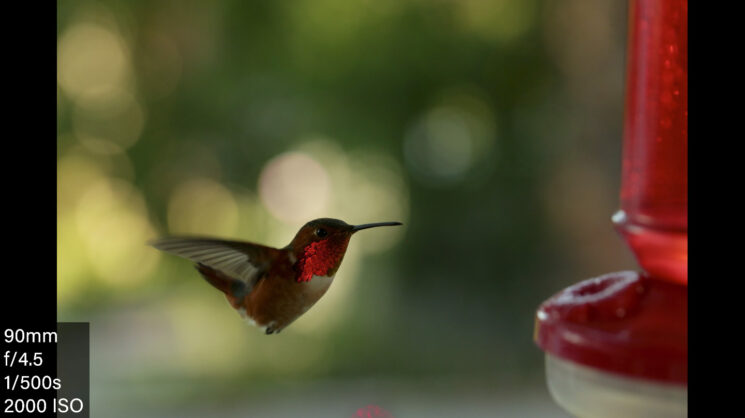 There’s a lot of applications for auto ISO. If you’re shooting birds you are going to have to probably be at a pretty wide open aperture like f/4 or f/2.8 depending on the lens you’re on. You’re going to want your shutter speed to at least be twice the focal length of the lens. So if you’re on an 800mm lens you’re going to be at least at 1/1600 of a second or faster like 1/2000. So you’re now going to let that ISO move for you because you’re moving quickly with the subject matter. It’s going to be very hard to keep up. 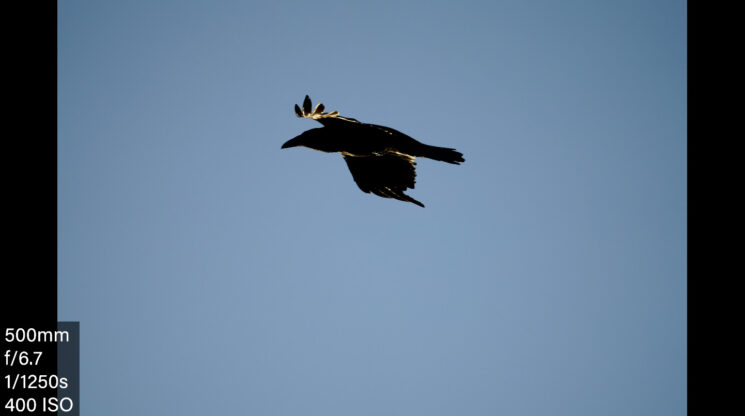 I know people who use auto ISO when they shoot street portraits. They know they want a really shallow depth of field. They know that they want to shoot at like 1/500th of a second or maybe 1/250th of a second. And then let the auto ISO just make up the rest. So they can just point and shoot when you’re in those dark situations. Aperture priority is very difficult because you may choose f/2.8 or you may choose f/4. But now the shutter speed is down to 1/30th of a second. And it’s not going to give you a shutter speed that’s acceptable for you to be able to handhold. 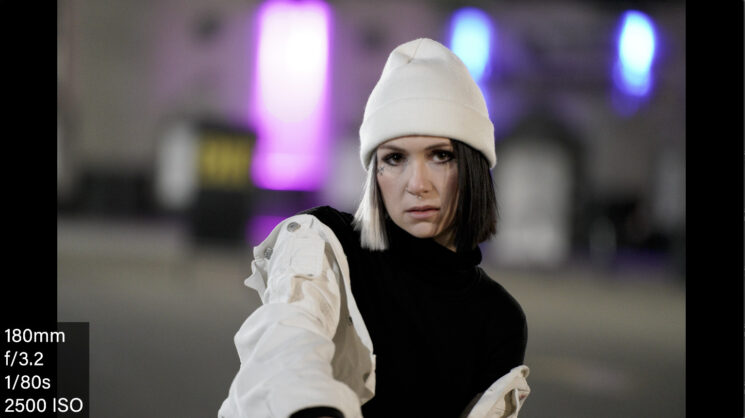 I do like the thought of limiting the ISO and shooting on aperture priority. That’s going to create a situation that I think can give me the best of those two worlds. But it depends on where we’re shooting and what we’re doing. 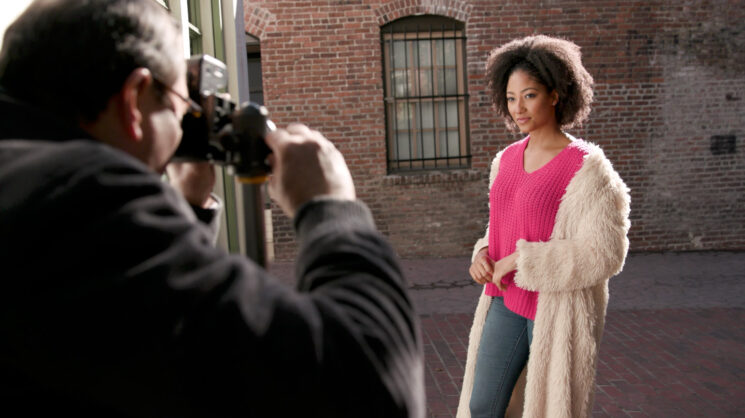 If I’m photographing models outside I may try that. And you’ll see how that works for me. I will shift sometimes. I may be on aperture priority and then I’ve got a model now who’s running. I’m going to want to shift here to auto ISO so I can capture this model as they run and jump. 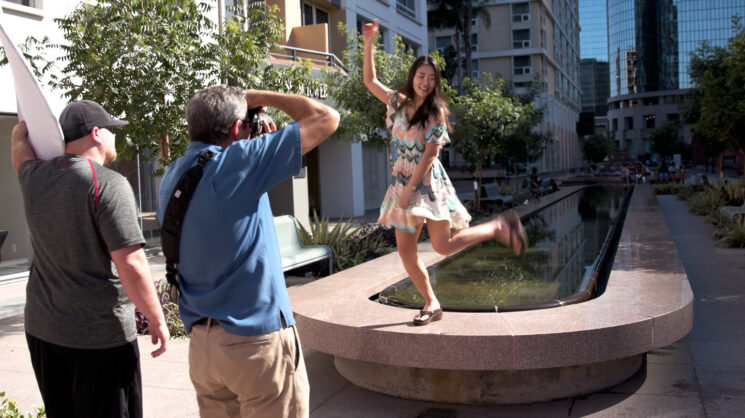 It’s going to be a lot easier for me to do. And so I’m going to change to an auto ISO mode from my after priority mode. So there’s nothing that says you have to be in the same mode the entire time you’re shooting. You will make a decision based on what’s going on in front of you. And with a model that happens all the time. So you really need to become very fluid about being able to change between these modes so you can really make what’s going on in front of you work and you can get the images you want. And you can really change quickly. So you can adapt to what’s happening in front of you.

All right, so there you have it. Stop shooting on manual and use auto ISO when you want to freeze action.

Canon Released an ISO Monster That Goes Up To 4,000,000 ISO
« Rode’s Lavalier II features a new low profile design for everything from content creation to cinema
Former US President Donald Trump is publishing a photo book of his time in the office »