Hey guys, this is Benjamin Von Wong, Montreal Based Photographer, and I wanted to take a couple minutes today of your time to give you guys a couple quick tips on how to control your sets when shooting in public! 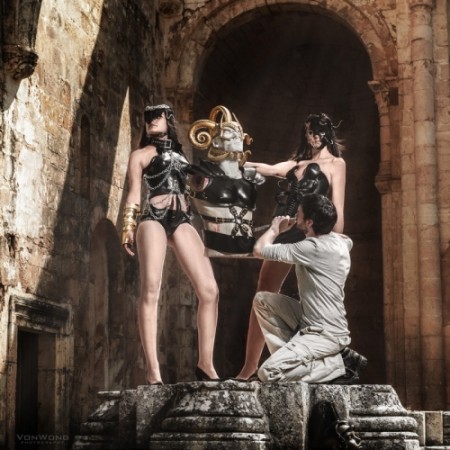 In my latest tour across Europe with fellow videographer Erwan Cloarec , we happened to be in the middle of a bunch of ruins with girls dressed in leather… and of course before we even began to shoot we were interrupted by busloads of tourists that came to check out what was happening. Before continuing on this blog post, I invite you guys to check out the BTS video!

[Udi: Ben recently started a blog, and if you like the stuff he’s been posting on DIYP, there is a pretty good chance you’ll get addicted to Ben’s fast pasted, tons of info style posts over there as well]

And now back to how we handled the situation in just a little bit more detail:

The first thing we did was greet them with open arms. Although we didn’t have official permission to actually be shooting there, going up to them confidently and explaining to them what you’re actually doing makes it look like you have all the right in the world to be there. Of course, this doesn’t mean that you should just rush at them and tell them to leave, since they have just as much right to be there as you do… but you should most definitely stand your ground. You’re not destroying the property, loitering or setting fire to anything… It’s all ok.

From there, they often come up and begin to ask questions. At this point in time you have two choices. Either you have a bit of extra time and you take the time to entertain a couple of them so they can spread what the whole thing is about… or you delegate to someone else to do the explaining for you so that you can go about to actually setting up your photoshoot.

Since we actually had a bit of free time on our end, I took the time to chat a little bit with the tourists to promote/brag about the work that Cecilio was doing which lead to some of the tourists even posing with the masks (1:14 in the video) 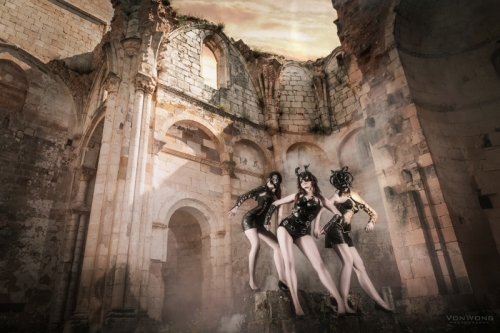 By this time some cameras had already began popping out so I quickly went over to the models and made sure to ask if they would be ok with being photographed half dressed. In my case, they really didn’t mind so there was nothing to really do but in the event that they weren’t, I would have simply stated in a loud confident voice “Excuse me guys but please, no pictures”

From there there’s really not much left to do but make sure that you have the space to work so if you need to move people around, just move them around. Politely but firmly.

There are even instances where you can actually turn the fact that you’re in a public location into an advantage and solicitate help from the public such as on this shoot with these Amazing Mechanical birds.

So what it truly comes down to is: Don’t let yourself be intimidated by the public. You have as much right to be there as they do (or if you don’t they probably don’t know that) so be firm but polite!

[Udi: Ben has a blog post detailing much of the technical aspects that went into that shoot over at his mentioned blog, a great read if you want the lighting pron, setups and such.]