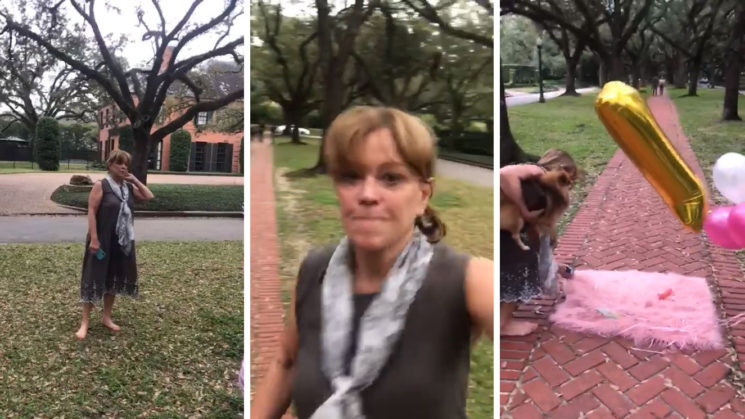 On Saturday, 16 February, Kelyn Alyssa and her husband went to Broadacres in Houston to have some photos taken of their baby daughter to celebrate her first birthday. During the shoot, a woman started shouting at them from a car for taking photos. But then it got worse – she got out of the car and threw a tantrum. She was screaming at the couple and the photographer, she hit the husband and started moving the props, all while the terrified child was screaming.

Kelyn posted the video of the incident on her Facebook profile and it quickly went viral. She writes that, at the time when they arrived, there were a few other photographers working with their clients. After about 35 minutes of the one-hour shoot, they heard a woman shouting at them through a car window: “You are trampling the grass that WE pay for.”

Then, she got out of the car, barefoot, carrying only a cell phone and her dog. She released the unleashed dog, which made Kelyn afraid for the baby and she warned the woman that she will press charges if the dog does any damage to her child. Soon, the photographer got involved, too, according to Kelyn.

Our photographer calmly approached her to let her know that she was the one directing the shoot. The lady tells her that she brought “these” people into “her” neighborhood. The lady had no answer when asked why she did not approach the other photographers WHOM SHE PASSED ON HER WAY TO APPROACH US. Her lack of response prompted my husband to take out his phone to record what was going on.

From here on, the incident was caught on camera. The woman hit Kelyn’s husband twice, screamed at the couple for taking photos “on her property,” and started removing the props that were set up for the shoot.

Kelyn writes that a police report has been filed. She and her husband will be pressing charges and they are currently seeking legal counsel on this matter. She adds that, when her husband spoke to a police officer, he confirmed that they were doing nothing wrong because they were on public property.

According to KTRK, the angry woman in the video is Franci Neely, Houston socialite and ex-wife of Astros owner Jim Crane. In a statement to ABC13 Eyewitness News on Monday, Neely said that she was very sorry to make the family upset, but added that “the couple whose photo shoot obstructed the walkway were not respectful after explaining the situation.”

Back in 2017, the Broadacres Homeowners Association posted signs that prohibited photography. The residents were frustrated with some commercial photographers who were going overboard with props, obstructing the paths and damaging the grass. However, the city of Houston confirmed that photography should be allowed, and the signs have been gone since then.

Cece Fowler, president of the Broadacres Homeowners Association, explained that “the city owns the streets on North, South and West boulevards as well as the brick sidewalks that run down the middle of the esplanades.” When it comes to the grass, it’s owned by the Broadacres Trust.

Now, although photographers are officially allowed to bring their clients to this neighborhood, there are still certain rules they must follow. One of them is that they must always leave the sidewalks clear for public use. Alanna Reed of the city of Houston’s Public Works department explained that anyone who needs to block part of the street must get a permit from the Mayor’s Office of Special Events, adding that “it’s about having respect for each other and being good neighbors.”

To be honest, the family and the photographer were blocking the pathway with the props they set, from what I can see in the video. However, I’m sure there was a better and more civilized way to solve this, rather than screaming, hitting and scaring a one-year-old baby to death.