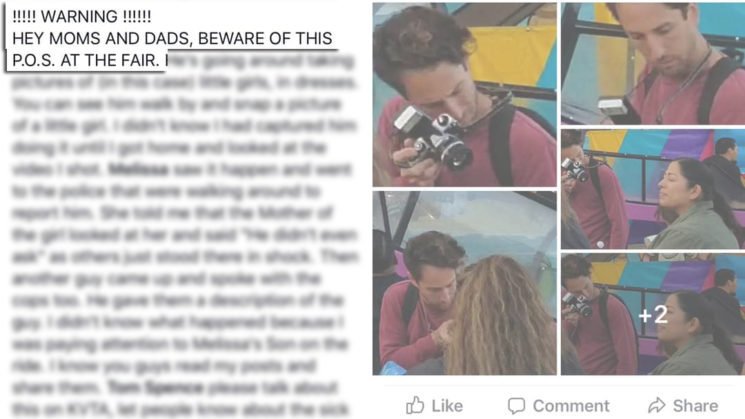 Last week, street photographer Joshua Rosenthal visited the Ventura County Fair in Ventura, California. Since he is, well, a street photographer, he used the opportunity to take some candid portraits of people at the fair. When he woke up the following day, he saw something extremely unsettling: photos of him were shared across Facebook, along with vicious and disturbing accusations from local vigilantes.

Joshua shared the Facebook post he found. He explained that he often takes photos of people without prior approval, because “the photos speak more to the moment.” He added that “one can’t capture life when it’s being posed.” And while he was taking candid photos at the fair, someone photographed him. His photos were shared on Facebook along with a post calling him a “piece of sh*t” and indicating that he was targeting young girls.

So guys, I have woken up to all the sadness in this world striking me square in the face. Not really sure how to respond…

Some of the comments below the post were quite disturbing, saying stuff like “these type of people need to be killed.” And as if all of this weren’t enough, Joshua was also questioned by the police. Ventura Police Department published a post on their Facebook page saying that they questioned the photographer both at the fair and the day after. “No crime occurred during this incident,” the post concluded. However, it has now been deleted from Facebook.

Of course, Joshua felt terrible about the whole incident. “No- one here seems to be assuming responsibility. No- one wants to talk to me about what I did. People are just making accusations with no facts,” he wrote in his Facebook post.

Let’s not forget that a moral compass does not constitute the law. What one sees as being “wrong” is not illegal. In today’s day and age, if you see something you don’t like, ask about it… I’d be willing to bet there is another story.

Sorry I scared you (parents of some random girl) I understand that one wants to protect their kids. But protect them from what? Check out my photography guys, you be the judge. Then if you have questions, ask..

On the one hand, I completely understand parents for being concerned about their kids’ safety. As a photographer, I know what it’s like when people look at you suspiciously (for whichever reason) when you take photos with a DSLR. So, perhaps that suspicion is even bigger when that camera is pointed at their child. Because of this, I would always ask the parent for permission, even though I’m not obliged to. There is no law prohibiting you from taking photos in public, even if you’re photographing children.

Because of this law, some photographers rather just stick to it and simply don’t ask for permission. If I were on the other side of the lens, I would always warn the photographer if I didn’t want mine or my kid’s photo to be taken. If I were concerned, I would express it try to talk, just like Joshua suggested. In my world, most of the problems can be solved with a sincere conversation. But apparently, not everyone thinks the same.

Some people prefer staying quiet and publicly calling out on someone. And I wonder what kind of people will write that someone “needs to be killed.” People like that scare me way more than someone who stealthily takes my photo.

« Canon has been working on an insane 50-80mm f/1.1 zoom lens for the EOS R
Woman called out publicly by sister over fake Instagram hiking photo »