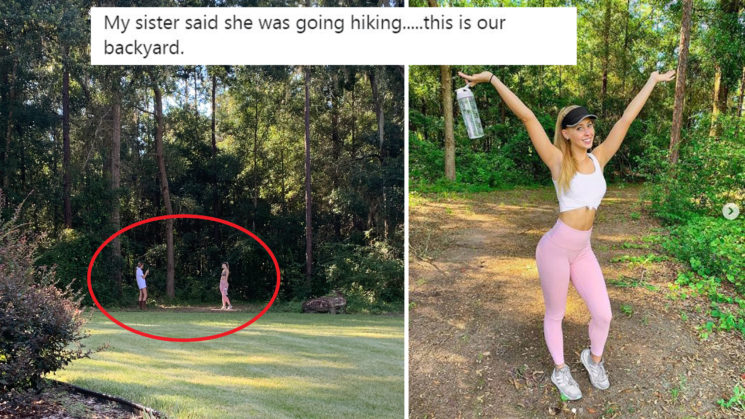 I guess we all know that most of the stuff on Instagram is fake: likes and followers, travels, faces and bodies, even pancakes! So it’s probably not a surprise that a young woman recently posted a fake hiking photo which was taken in her own backyard. But what makes it funny is that she got busted for it by her own sister.

Casey Sosnowsky posted a photo on Instagram where she poses surrounded by nature, wearing sportswear and carrying a water bottle. The caption read “Nature is the ultimate healer to all our problems.”

But, it wasn’t long before her sister Carley called her out in a tweet. She posted the BTS photo and a screenshot of Casey’s Instagram post with a caption: “My sister said she was going hiking…..this is our backyard.”

My sister said she was going hiking…..this is our backyard. pic.twitter.com/LDGhAHNSSp

From here on, the whole story just exploded. At the time of writing this, Carley’s tweet has over 41K retweets and 277K likes. At some point, Casey jokingly replied to the tweet, writing that she feels “personally attacked.” She also changed the caption of her Instagram post to read “Did I go hiking? No. Is this my backyard?…… Maybe.”

As you may expect from a viral tweet, it has caused a lot of different reactions. Some people had a good laugh and saw this as a classic sibling roast. The others were wondering how Casey’s top changed color (her sister explained that she’d taken the white tank top off and the sports bra was under it). Of course, there was some trolling as well. And there were those who accused sisters that this is all just a marketing stunt. Considering that Carly tagged names like Cosmopolitan, Jimmy Fallon and Ellen DeGeneres right under her tweet, I tend to follow under the last group and believe that this is just a marketing stunt. What do you think?