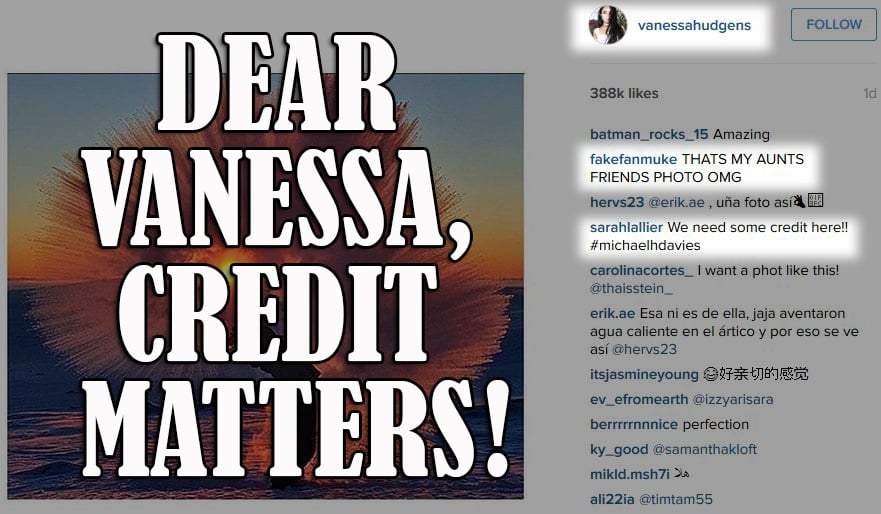 Last month we shared Michael Davies’ stunning photo of tea being tossed at -40° Celsius, which seemed to have spread online like a wildfire.

The photo even reached actress and singer Vanessa Hudgens who decided to share it on her social media pages, but unfortunately the famous artist didn’t bother crediting Michael.

Angry comments from Instagram followers led to a simple hasthag being added, but the star still hasn’t credited the talented photographer on Facebook or Tumblr.

Will you chime in and help teach the star that copyright matters?

Michael received a message yesterday from his cousin, Darcy Downes, informing him that her niece noticed Hudgens posted his famous photo to her 14.8 million Instagram followers. The actress didn’t bother crediting Michael, but among the 694 comments the photo had received by then there were comments calling Hudgens to give credit for the 252,879 likes her post received. 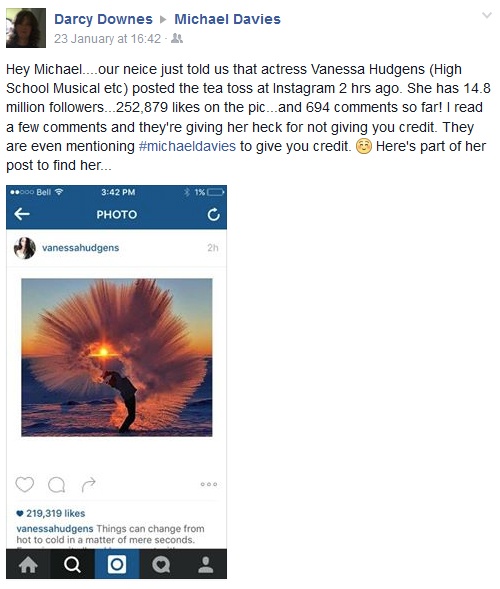 After the post received several comments such as this:

Hudgens finally gave minimal credit by adding “#michaelhdavies” at the end of her post. No apology, no link, just a hashtag.

Unfortunately Hudgens, who is obviously very aware of the importance of getting one’s name out there and receiving proper credit, didn’t do right by Michael.

As of right now the photo has received 388K likes and 1,032 comments, but the photographer got nothing out of the major exposure his photo received.

“Sadly the traffic to my website didn’t change at all; I think the hashtag was too late for it to really make a difference. Plus the hashtag doesn’t take anyone to my site it’s just a hashtag”, Michael told DIYP.

Michael’s Facebook page suffered the same lack of new traffic with only 3-4 new likes after the photo was shared with almost 15 million people, and it’s more than likely that these people reached Michael’s page from one of the countless media organizations that had recently shared his photo and bothered to link it back to him.

“I was surprised that she shared it without credit,” the disappointed photographer told me. “I mean she’s an artist herself and I’m sure she wouldn’t be happy if some was showing High School musical without her name in the credits. That being said I’m glad she eventually added the hashtag, even if it was from pressure. I would like to hope it was an oversight on her part and once she was reminded she made an attempt to fix it. I have no hard feelings at all.”

Unfortunately, it seems this was more a matter of not caring than an oversight. I say this as a quick review of Hudgens’ other social media pages show that she only added credit where angry comments pointed her out for not doing so.

Hudgen’s had posted Michael’s photo on her Facebook and Tumblr accounts with the same text as the Instagram post, but she has yet to add any credit on either of those pages.

While a (late) hashtag on Instagram did nothing for Michael, a simple tag on Facebook could do wonders. After all, Hudgen’s post with his photo received 70,956 likes and was shared 651 times so far.

Hopefully this post will help Michael (website, Facebook, Twitter, Flickr) get some of the much-deserved traffic he was deprived of, and maybe even teach Vanessa Hudgens how to properly credit artists whose work she uses to maintain her own social media fan base.

Please feel free to chime in and comment on any one of the posts below, and let Hudgens know what you think about her posting Michael’s photo without proper credit.

Things can change from hot to cold in a matter of mere seconds. Experience it all and be present with every moment. Life’s too short to let it slip. Feel as much as you can. Live hard. Laugh louder.

Vanessa, if you’re reading this, a clarification post on your social media pages (including actual links and/ or tags this time) would go a long way to show you care about other peoples’ copyright and photographers in general.

Until that happens, Michael asked to mention how thankful he is to all the people worldwide who tried to have Hudgens credit him in her post.

In the words of Vanessa Hudgens, with a small addition of my own: Life’s too short to let it slip. Feel as much as you can. Live hard. Laugh louder. GIVE CREDIT!

Thanks Darcy for pointing out that the photo was also posted on Hudgen’s Twitter account. No credit has been added there either, but people aren’t letting it slide:

@VanessaHudgens You could give credit to the photographer Micheal H. Davies. He worked his ass off to get that shot. #michaelhdavies