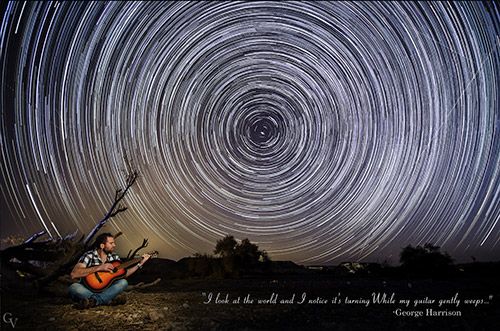 In 2006 the Beatles released a new album – Love. It was pretty weird considering John was long dead, but after some googlling I realized that it was a new reworked version of some of the songs made by the band’s original producer, Sir George Martin. It was based on the bands already exiting recordings, demo tracks and bits that never made it to any of their prior albums.

One of the songs (track #22) is an acoustic version of While my guitar gently weeps, written by George Harrison, where Eric Clapton joins the band (AFAIK the only time where anyone ever joined a recording by the Beatles). For me this song is even better than the original track (please no flame wars on this :). If you know the story of Harrison, Clapton and Patti Boyd you know how touching it is to hear those two guitar legends play together.

Back to now, I have 18 versions of this song. It is just one of these songs that everybody loves playing. I love it too. This is why I wanted to create an image for this song based on the immortal line “I look at the world and I notice it’s turning While my guitar gently weeps”.

The general idea was to shoot a Star Trail photograph with a guitar player in the foreground of the frame. This idea has been bouncing in my head till a sketch was entered into my sketch book. Well, it stayed in the book for a while till my exams were over, and then it was time to play. 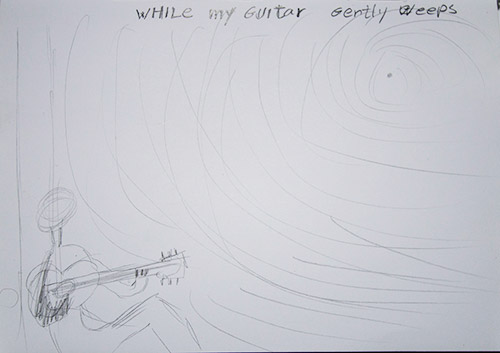 I just happen to live in Israel which being so small is pretty populated and there are very few places that work for a good uncontaminated star shot. The best place in Israel is the Negev, a small desert located in the south of Israel. 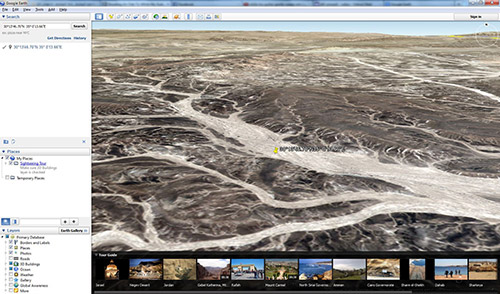 We used Google Earth to select a location on a dry stream, hoping to find interesting rocks or trees to use as the front element of the shot. We then verified with the weather service that it is actually dry and what days should be good for shooting (no rain, clear sky). Looked like Tuesday would be a good day.

Now that we had a location, the next step was to find the relevant times to shoot. Light coming from the moon is a killer to star trails so we wanted to verify that we have no moon while we were shooting, and to know when the sun is going up. There is a great freeware for that called Stellarium.

We punched in the Google Earth coordinates to Stellarium and learned that the moon was on during our designated time. It would go down at 2 AM and then the sun would go up at about 6:15. (I learend that by moving the time forward and backwards to see when the elements change). This meant we have about 4 hours to conclude the shoot. 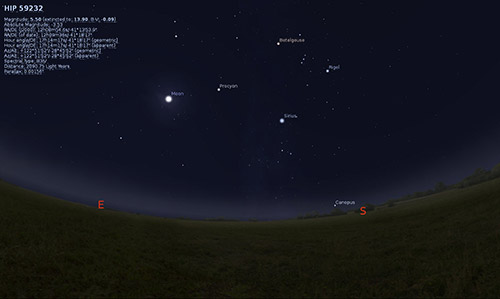 On The Day Of The Shoot

On Tuesday I rechecked with the weather service and hit the road. When doing a shoot which is both far and under the sky it is crucial. While it may be a bummer to cancel a shoot, it would be even bummier to drive 6 hours only to find out that it is raining or too cloudy to do a stars shoot.

With the moon only setting at 2 am, I do a pit stop over at a friend’s house who will be joining for the shoot. We load up the car with the usual gear, add a field generator and hit the road.

While this shoot could have been done with batteries, we brought a generator for several reasons, we wanted enough juice for the laptop to run so we can use the screen to focus, verify details etc… we had 2 studio strobes to power up and we wanted to be able to use flood lights as a safety measure should anything happen in the desert. As we drive outside the city the skies are still contaminated with light – no stars.

After 45 minutes ride we arrive at the location. It is a dirt road which is actually the dry stream. (it gets filled up with water once it starts raining). We drive along the path until we see a fallen tree that can serve us well as a foreground element, our bet has paid off.

We stop the cars, kill the lights and play the very same song we are about to shoot performed by Peter Frampton. We are far enough from civilization that we can see the star filled sky – I am smiling.

As the guys started a small camp, I started looking for the best angle and composition. The skies were so filled with stars that I used a compass to find the north star – I wanted it to be in the center of the shot.

I made sure to position the tree on the left providing a motivated place for the guitar player, and keeping small stretch of dirt on the bottom for a later text add on.

Once the composition was set, I secured the tripod. With shots like this that will end up automatically stacked, the camera should not move at all. Any slight movement will generate blur on the final photograph. I added a few weights to the center poll of the tripod for additional stability. 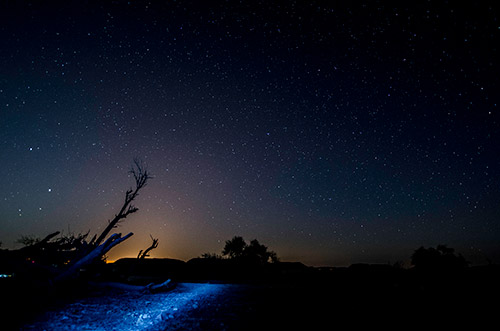 We then hooked up the generator, laptop and camera. For triggering the camera we used Nikon Camera Remote. Shooting tethered allowed us to carefully examine the shot. We shot with a Nikon D7000 and a sigma 10-20 lens. The camera was set to ISO 1250 which @ f 3.5 for a 30 seconds exposure. The D7000 performs well enough at 1250ISO as far as noise goes and we had enough light coming in to show the magnificent skies.

We set the focus to the hyperfocal distance to retain as much sharpness as we can both for the foreground and for the stars. The formula is not that complicated, but as the saying goes, there is an app for that. We did bring measuring tape so we could pin point the distance where we wanted to focus on. Then switch to manual focus to lock it.

We took a few test shots before putting the computer on autopilot and saw that our small campfire and LED light contaminated the scene. We flagged of the light with a piece of fabric. We then set Nikon Capture to keep shooting. 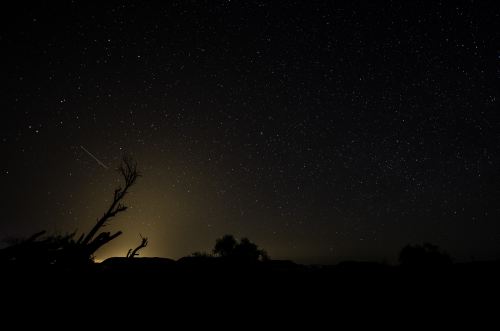 After that it is generally a matter of letting the setup run while checking on it every once in a while to make sure the battery is not dead, the software did not crush and so on.

Here is a quick time lapse that shows the night during the shoot.

While the sun was to rise at 6:15 it starts getting brighter about an hour earlier as the sun approaches the horizon from “below”. At first sight of light we set-up the guitar player shot. The setup is pretty trivial – two small heads in medium Photoflex Litedomes. One boomed overhead to the left as key, and one roughly on camera axis for fill. 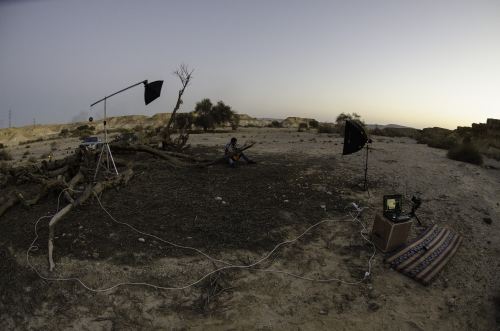 (We wrapped up just around sunrise, which is the coldest hour of the night. everyone was wearing layers over layers of clothing and I was down to light summer shirt for the guitar shot). We wrapped up. 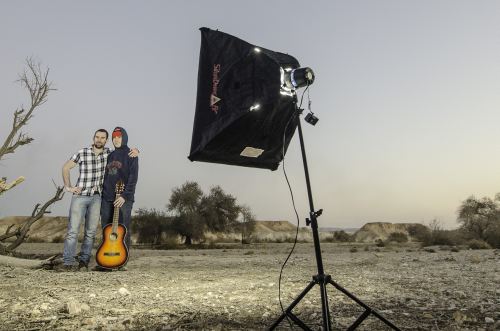 It only took 400 km and over 4 hours to drive back. It made sense to go to bed, but I got on Lightroom instead.

All the images were corrected for clarity, contrast and brightness, then saved as Tiffs. Those would be the input for the stacking process. 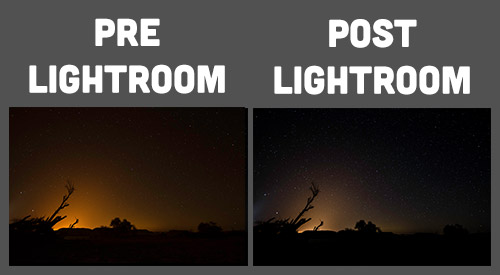 The Tiffs from lightroom were fed into Startrails – a free star trail stacking program. In a nut shell, this programs picks the bright pixels from each still to create the trails. My night had 297 single photographs. Here is the fun thing, the display window keeps showing the progress on the composite, so you can tell if you had a good night.

About 40 frames into the process  I knew I had it. 700 kilometers, 38 hours and one teardrop later I got this photo. 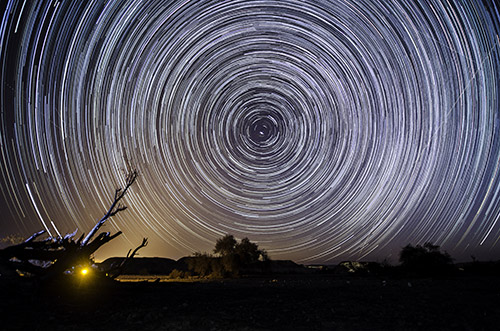 Now it was time to add the guitar player to the star trails photo. Since we made sure the camera did not move between the star trails shots and the model shot, it was be pretty easy to composite. I asked Natalie Houlding to help with the final merge. 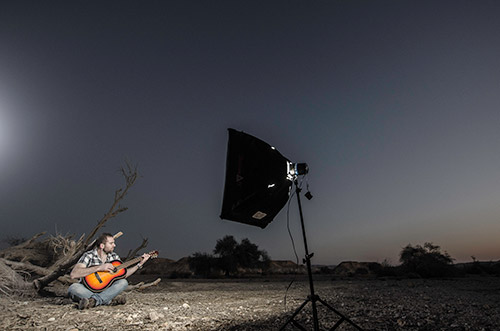 Aligning the images was pretty easy since they were both taken from the same angle using the same focal length. A mask was applied to keep the model and throw away the background. I matched the color balance and brightness for the two images to make sense together.

Here is the funny thing, most of the time was spent on choosing the font for the script on the bottom.

Here I gathered the tips and tricks that are scattered along the post. Feel free to ask question or add your own.

Don’t go alone – staying a full night in the cold dark desert is no fun. If you can find company to make the trip less lonely and assist with hauling, lighting and provide some company for the small hours of the night, you will find the experience much more enjoyable. For this one, I traveled with my brother Ron Viner and a good friend – Avi Biton

Weather forecast – check, check and double check. I recommend checking the weather at least twice – when selecting a day for the shoot : look for low humidity, no clouds and no rain. And again on the day of the shoot just to be sure.

Preparation – Like any good shoot good preparation is key to success. Make a check list of gear and check (and double check) it before driving off, it is not like you can drive back and bring that lens you forgot. Make sure your batteries are full. Do a quick test run to make sure your gear works together. It would be a darn shame to discover that the specific triggering software does not work with the specific firmware on the camera. It is better to over-pack than to under-pack, stuff left at home can hot help on the shoot.

Bring hot clothes – It is cold in the desert. worst thing that

Watch the moon and sun – Make sure you know where and when the moon and the sun come rise and set. This will put a timing envelope for the shoot. I use Stellarium and push pull on the time sliders to see the location and times of the moon and sun.

Here is the photo again, click it for a bigger version (~3MB). For me this photo will always bring memories of how I was lying on my back hearing a soothing shutter click every few seconds. And all I can think about is an adaptation for a line from the song… As I’m sitting here doing nothing but aging .Still my DSLR gently clicks.

This song is a hilarious ode to Gear Acquisition Syndrome

An Ode To My Power Supply Unit + Setup Shot