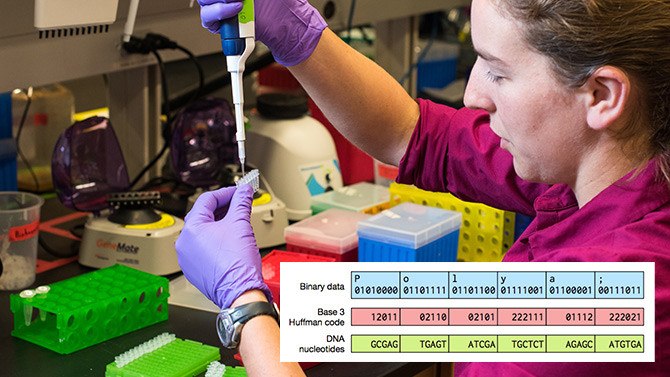 As our data creation and acquisition requirements soar, so must the technology to store it all, and a team of computer scientists and electrical engineers from the University of Washington have seem to have made a bit of a breakthrough.

In a paper presented in April at the ACM International Conference on Architectural Support for Programming Languages an Operating Systems (ASPLOS), the team detailed one of the first complete systems to encode, store and retrieve digital data using DNA molecules, capable of storing information millions of times more compactly than existing storage technologies.

In the paper, one outlined experiment details successfully encoding digital data from four image files into the nucleotide sequences of synthetic DNA snippets.

Even more significantly, they were also able to reverse the process and retrieve the correct sequences from a larger pool of DNA, reconstructing the original images without losing a single byte of information.

Life has produced this fantastic molecule called DNA that efficiently stores all kinds of information about your genes and how a living system works — it’s very, very compact and very durable.

We’re essentially repurposing it to store digital data — pictures, videos, documents — in a manageable way for hundreds or thousands of years.

The first step of the process is converting all the ones and zeroes that make up the image using the four basic building blocks of DNA – adenine, guanine, cytosine and thymine.  It sounds simple, but the issue has been working out how to pack as much data as they can into as short a string as possible while remaining error free.

Once the team have determined how to best represent a file, artificial DNA is then synthesized based on their calculations.  Getting the data back out is a much simpler process, due to distinctive markers placed within the DNA by the team denoting the start and end points of files, and just reverse the encoding process to reproduce the original file.

Information can be stored many millions of times more densely in DNA molecules than in any existing data storage technologies.  Other technologies also degrade after just a few years or decades, whereas DNA can be dehydrated and reliably preserved for centuries.

It’s this long term reliability which makes this technology more suited to long term archival storage rather than the needs of general computer users where data needs to be accessed randomly and immediately.

It’s also somewhat expensive, and it’s not the kind of thing you can at home with a junior science kit.  If the price can be brought down to something more manageable, however, it could help to solve the world’s impending data storage problem.

You can read the full paper, here.

[University of Washington via Gizmodo]