Originally based on Florida, and drawn together by a common love of photography, Victoria Yore and Terrence Drysdale took their first trip together in June 2015 to Europe, and have been hooked ever since.

Armed with little more than a couple of backpacks, some camera gear, and a one way ticket to Europe, the model & photographer duo set out on their journey to see, experience and photograph everything the world.

So far, the pair have been through 9 countries around Europe and 5 US states photographing their journey, and it doesn’t look like they’re about to slow down any time soon.

Obviously, such travel plans require packing fairly light.  When you don’t know where you might be going from one day to the next, and often having to carry everything with you, they pack a fairly modest set of equipment.

When they go out with the purpose of creating photographs, the Sony A99 is their weapon of choice, usually with a 50mm lens, although they also carry 35mm and 85mm lenses, just in case.  Until recently, their kit also included a 70-200mm, which met an unfortunate end after falling out of the camera bag.

Of course, sometimes you just want to kick back, relax and do the tourist thing with an iPhone 6 and Samsung Galaxy 6 Edge Plus.  They say that the Edge has a pretty stellar camera, and they love that they can shoot in raw and edit the images in Photoshop if they choose to.

According to Victoria and Terrence, the project has been evolving very organically, heading out to each shoot unplanned with simply a camera and a bag of outfits to see what they can come up with.

Using only natural light, and with simple hair and makeup, they make the world look like something out of a fairy tale.

We wish them both the very best of luck with the rest of their journey, and can’t wait to see what comes next.

You can keep up with Victoria and Terrence’s adventure by following their blog, Follow Me Away where they also share some great travel tips if you’re roaming on a budget.  You can also follow them on Instagram, or reach out to them through Facebook.  Images used with permission. 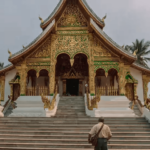 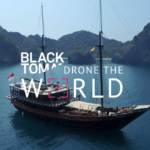