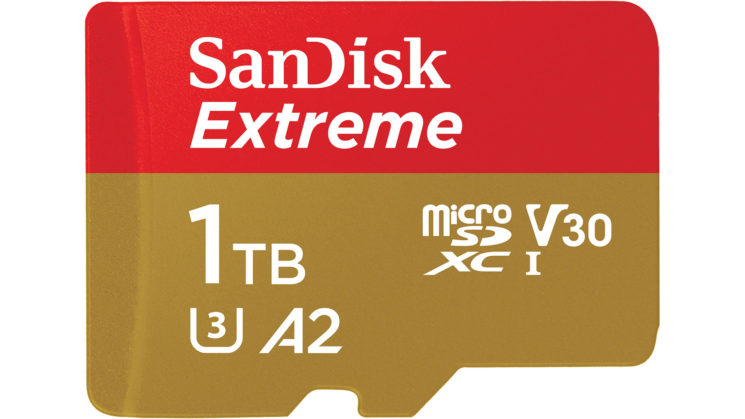 The massive SanDisk 1TB microSD cards announced in February are now available to buy. Priced at $449, the 160MB/sec SanDisk A2 card is listed on the SanDisk Website, B&H and Amazon. The latter two aren’t showing it as being in stock yet, although you can pre-order. The 512GB card comes in at $199.99.

Designed primarily for smartphones and other devices that require many read and write cycles per second, such as single board computers like the Raspberry Pi or ASUS Tinker Board, these cards carry the A2 performance class rating. This means that they can handle up to 4,000 read and 2,000 write operations per second.

They also boast read speeds up to 160MB/sec and write speeds of up to 90MB/sec – more than plenty for smartphone photographers and filmmakers looking at the incoming generation of devices shooting 48-megapixel and larger images and 4K video.

For me, such storage capacities aren’t just for creating content with your smartphone, though, but for backing up content made with your “real cameras”. I regularly back up my cameras at the end of a shoot to the microSD card sitting inside my phone (the 128GB version of the same card). It’s a great way to help ensure you’ve got multiple copies of your work at the end of the day, and if anything happens to your card, you still have another copy. And with a 1TB card, you’ll be able to back up plenty.

Do make sure that your device is compatible with these cards before purchasing. Some devices (particularly 360° and action cameras) cap microSD card capacity at 128GB or 256GB. You don’t want to spend this kind of money to find out it won’t work for you. I wonder if it’s compatible with the new DJI Osmo Action?

As a bonus, the release of this new card will likely drive the prices of the smaller capacity cards down a little, if your devices can’t handle cards of this size.

What would you fill one of these with? Selfies or cat photos?