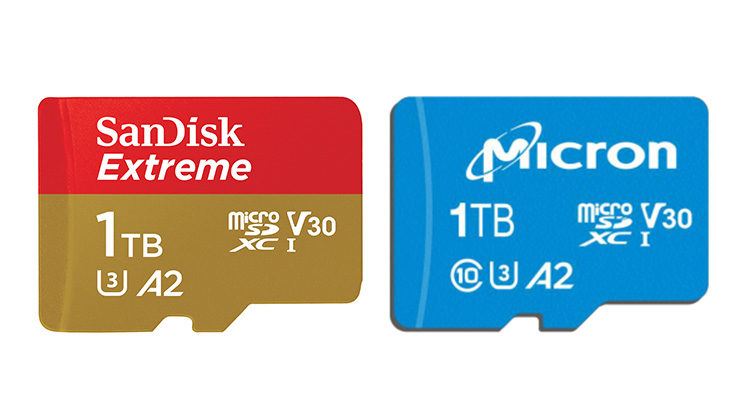 The race for more and more storage on tiny little cards just keeps on trucking. Although SanDisk showed off a proof-of-concept 1TB SD card way back at Photokina 2016 and ProGrade announced their 1TB CFexpress cards last April, it wasn’t until recently that Lexar had released a 1TB memory SD card that you could actually buy.

Now, though, both SanDisk and Micron (the people who used to own Lexar) have beaten Lexar to the punch when it comes to scaling that down, having both announced their own 1TB microSD cards at Mobile World Congress 2019.

SanDisk announced theirs first, so we’ll start with that one. 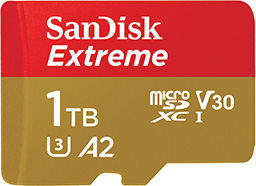 This is a UHS-I U3 microSD card designed primarily for smartphones. It offers read speeds of up to 160MB/sec, and write speeds of up to 90MB/sec, although only guarantees V30 (30MB/sec sustained). It’s the same sort of performance we get with the current line of SanDisk Extreme 160MB/sec cards, and if these perform as well as my 128GB versions, they’ll absolutely fly, without any stalling or recording issues.

The 512GB version of this card was also announced, and both will be available to pre-order now through the SanDisk website. They will become more generally available through select retailers in April. The 512GB is $199.99 while 1TB will cost you $449.99. 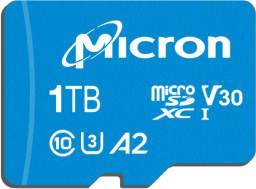 Micron’s announcement appears almost identical to that of SanDisk, offering a 1TB capacity UHS-I U3 microSD card with A2 performance classification and a V30 minimum sustained write speed. Where it really differs are the read and write speeds. The Micron card just edges out the SanDisk at up to 95MB/sec write speed, however, the read speed is significantly slower, at only 100MB/sec.

The Micron c200 1TB microSDXC UHS-II card is expected to ship at some point during Q2 2019, although a price has not yet been announced.

They might seem overkill for smartphones, unless you’re shooting a lot of video. But in terms of capacity, as long as they can get the price point low enough, they’ll be very versatile cards. I often use my ASUS ZenFone 5 as backup storage when out on a shoot. Just plug in my card reader, copy the contents, and done. If my cards die or I lose them on the way home, I still have a copy of everything on the microSD card sitting inside my phone. So, as far as I’m concerned, for this use, the bigger the better.

But such large microSD cards also offer longer options for those shooting with drones, 360° cameras (Insta360 ONE X review here!), action cameras and similar devices. And it’s not just phones and cameras, either. Cards with this kind of capacity and fast transfer speed, combined with the fast IOPS of the A2 specification, makes them ideal for small computing devices, like the Raspberry Pi or ASUS Tinker Board – many people seem to forget this when they claim that “science has gone too far!).

What do you think? Would you use microSD cards this large? What cameras or other devices would you use them in?