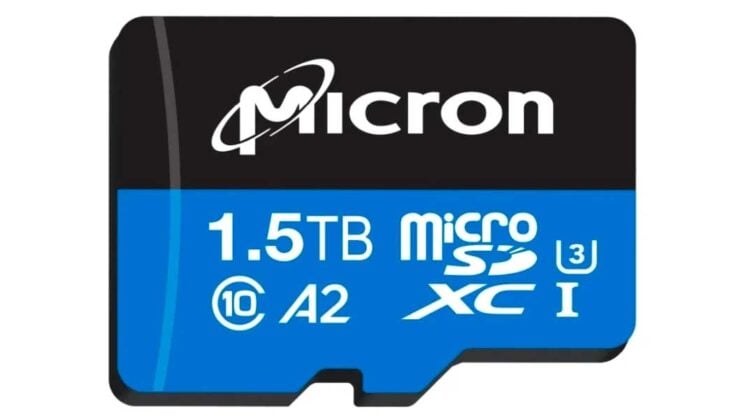 Anybody who knows me knows I’m a fan of big storage, especially when it comes to small storage. After 1TB SD cards were first shown off at Photokina 2016, it took a couple of years to come to market. But in 2019, they did and we’ve reviewed both the SanDisk Extreme Pro 1TB microSD (review here) and the Silicon Power Superior 1TB microSD (review here) cards here on DIYP.

While 1TB microSD cards still seem pretty insane, the devices that support them can actually handle cards up to 2TB. The problem is, nobody’s gone past that 1TB barrier. Until now. Micron has announced their newest high-capacity microSD card, which clocks in a massive 1.5TB. But it’s not all great news (yet).

Micron’s new card represents the first to use the company’s 176-layer 3D NAND storage tech to increase the storage density, which allows the new Micron i400 cards to come in capacities of 256GB, 512GB, 1TB and the newest 1.5TB capacity. The thing is, though, these high-capacity cards weren’t exactly built for speed. Sure, they’re A2 rated for lots of IOPS and they have that UHS-I U3 spec but they don’t have that V30 spec most of our microSD compatible cameras and other devices need to record video.

Sure, UHS-I U3 hypothetically gives that 30MB/sec minimum write speed, although I’ve found that mileage definitely varies and have seen some cards that claim to be UHS-I U3 dip well below 30MB/sec on sustained writes. Where speed is not a concern, though, for example in a Raspberry Pi backup server for timelapse cameras where you’re shooting photos with relatively long intervals from one to the next, this could become an excellent way of storing a lot of data quite effectively with minimal power requirements.

Micron says, though, that the cards are aimed at cameras. Just not the type we’re used to dealing with. They’re for the security camera market. They go on to say that a 1.5TB card could potentially store up to four months of security footage locally on a single card – ideal for situations with limited or no internet connectivity for cloud storage. And when it comes to longevity, Micron boasts five years of 24/7 usage.

There’s no word yet on exactly when the cards will be released nor how much they’ll cost, but you’ll bet they probably won’t be cheap. When SanDisk first introduced their 1TB cards, they were available for between around $450-600 (depending on whether you wanted the regular Extreme or the Extreme Pro and whether you wanted microSD or SD) until other manufacturers caught up. Now you can pick up the SanDisk Extreme Pro 1TB microSD for $222 and the Silicon Power Superior 1TB microSD for $167.

Now that Micron stands alone at the 1.5TB capacity, I think we’ll see similarly high prices until the other manufacturers start producing cards in that capacity, too. Then we’ll start to see a similar price war as the 1TB cards as each company drives the other down.

For now, to find out more, read the complete Micron press release and PDF datasheet.