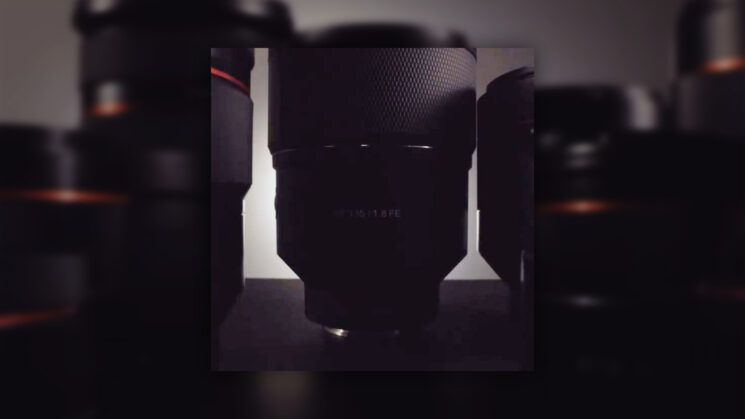 Samyang, like most brands these days, has a pretty good presence on social media and they regularly make content specifically for posting on platforms like Instagram and Facebook. Content like this Happy New Year video Samyang posted a few days ago. The video hides a little secret, though. It contains a lens that isn’t actually available to buy just yet.

Looking very carefully at the beginning of the video, and after a little Photoshop work, we can see that there is what appears to be an AF 135/1.8FE lens. The 135/1.8FE is quite obvious to read, although the “AF” bit is a little more obscured due to compression.

It was first spotted by the folks at Sony Addict. And you have to be very quick to notice it as it only appears in the first handful of frames of the video. But if you look really carefully, for a few frames, you can clearly see the focal length, aperture and lens mount printed on the lens, along with the “FE” moniker noting that it’s a full-frame lens, with a hint of the letters “AF” at the beginning – although they are somewhat compressed and blurry.

Exactly what other lens mounts we’ll see is unclear, although it’s likely that it will only come in Sony E mount, given that it’s the only lens mount for which Samyang makes autofocus mirrorless lenses. Hopefully, they’ll start expanding out into Nikon Z, Canon RF, Leica L and MFT at some point.

This would represent Samyang’s longest autofocus lens with the next longest being the AF 85mm f/1.4. Looks like they’re skipping a 105mm for now. There’s no word yet on when we’ll hear an official announcement, when it’ll actually become available or how much it’ll cost. But if we take Sigma’s 135mm f/1.8 DG HSM Art lens as an example, that one’s around $1,400 and Sony’s is $2,100. I think Samyang’s price will be significantly lower than either of those.