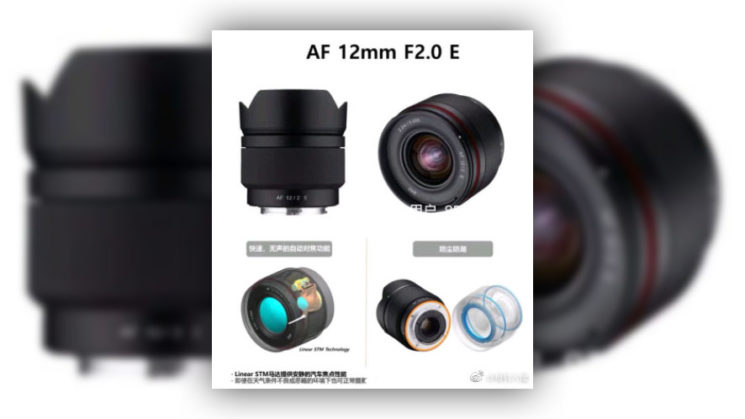 Well, we knew Samyang had two new astrophotography-focused lenses on the way. One of those lenses, for full-frame Sony E mount cameras, has already been announced. That’s the Samyang AF 24mm F1.8 FE, which features a dedicated custom function button that allows you to zip straight to infinity focus in an instant.

The other lens, for APS-C Sony E mount, was suspected to be a shorter focal length and according to images posted to Weibo, it’s going to be the AF 12mm F2.0 E autofocus lens with a pre-order price of 3,099 Yuan (~$450). The images aren’t very big, but it looks like the 12mm won’t feature that same custom function button of the full-frame 24mm. 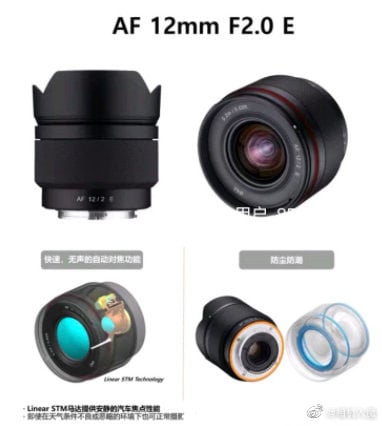 There aren’t really a many details in the photos, although there’s a partially transparent image showing the “Linear STM Technology” used to drive the autofocus system inside the lens. But from the views we can see, there don’t appear to be any buttons or switches on the lens at all. So, no custom “go to infinity” button.

Still, 12mm on a Sony APS-C body should give a field of view equivalent to about 18mm on full-frame, which is nice and wide for those night shots. And at an aperture of f/2.0, that’s really nice and bright – possibly the widest aperture autofocus lens out there for APS-C at this focal length and almost certainly for Sony APS-C cameras.

Samyang does also have a manual focus 12mm f/2.0 lens for APS-C cameras, for around $259. I’d be interested to see how the two compare in image quality, and if they’re close, how many would still pick the manual focus lens over the new autofocus one if it doesn’t have that “go to infinity” button.

The lens is expected to be officially announced at some point this month.