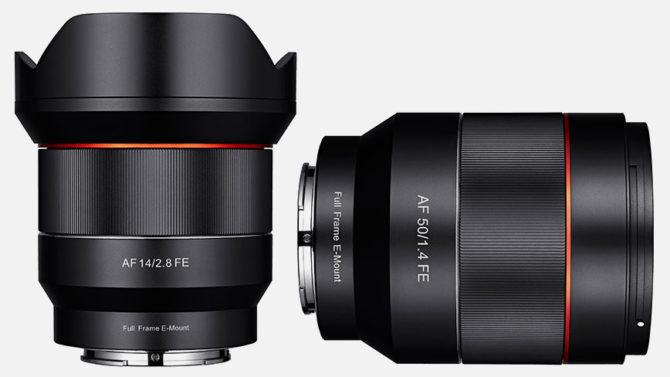 Samyang brought autofocus into their range of lenses not too long ago with two new Sony E mount lenses. The 14mm f/2.8 and 50mm f/1.4. Now, in a recent interview with Focus Numerique, Samyang head of product planning, Jeong Min Shin says that more are to come.

In the interview, he talked about some of the decisions and compromises that had to be made with the new Sony lenses. But he also suggested that Nikon and Canon autofocus lenses may not be too far away. The story for Fuji and micro four thirds, however, may be another matter.

We started the implementation of an autofocus optical FE frame and we are adapting to of other mounts, like Canon and Nikon. We also believe in Fujifilm and Micro 4/3, but these markets are not very important.

It’s may be understandable why Fuji and micro four thirds are a lower priority. The EVF and features such as focus peaking make manual focus much easier on Fujis and MFT cameras. Manually focusing on a DSLR, especially in lower light conditions, tends to be a little more difficult. It’s often a best guess unless you switch out your focusing screen for a split prism.

Of course, if that were their reasoning, then why bother with Sony when it also has an EVF with the same focus peaking abilities?

Don’t get too excited just yet, though. Shin stated that the company would likely be working on their Xeen range of cinema lenses before introducing any new autofocus photography lenses. So, there’s no set day yet when this will happen. But it is something they’ve been researching and implementing, at least internally.

I for one would love to see Samyang (Rokinon, Bower, or whatever they’re called where you are) entering more into the autofocus market. Their manual focus lenses are often pretty amazing, especially given the cost. But, there’s no question that autofocus offers a faster and more efficient workflow much of the time.

What do you think? Do you want to see Samyang producing more autofocus lenses for systems other than Sony? If they do, will you use them? Or will you stick to their manual focus lenses? Are you disappointed they seem to be discounting Fuji and MFT? Let us know your thoughts in the comments.