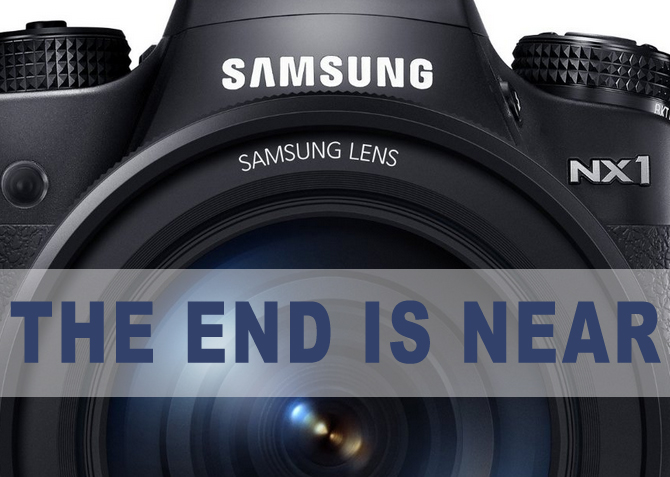 For a while now we’ve been seeing reports concerning the future of Samsung’s camera business.

It started with a report from a South Korean journal, followed by another Korean newspaper and Spanish and Portuguese stores claiming that Samsung will be exiting the digital camera business, and while Samsung hasn’t issued an official statement it looks like the end is nearing.

Reports are now coming in from Europe, Hong Kong and Australia claiming that at the very least the company is discontinuing its flagship NX1, if not shutting down the camera division completely.

In an unprecedented move, the company is reported to have explained this by saying that there are “much better and upgraded cameras”.

A reader of EOSHD by the name of Oliver Daniel said he email Samsung asking about the future of the NX1, following the many reports of its upcoming demise, the low stock across Europe and the lack of advertising efforts in recent months.

This is the response he received:

“We quickly adapt to market needs and demands. In Europe, we will be discontinuing sales of NX1 cameras for now since there is already much better and upgraded cameras. This is specific to the region – and is not necessarily reflective of conditions in other markets. We will continue to thoroughly evaluate market conditions and will make further adjustments to maintain our competitiveness in emerging Camera categories.”

While the response does not leave much to the imagination when it comes to the future of the NX1 in Europe, it does raise many other questions.

In which regions will the camera still sell?

Where else is it being discontinued?

Will other Samsung cameras be sold/discontinued in those regions?

Does this mean Samsung is working on a better line of cameras (NX2) or are they pulling out of these markets?

Those questions remain unanswered for the time being, but I’m still blown away by Samsung’s response stating that there are better cameras out there. True or not, I don’t recall ever hearing a company admit defeat so openly.

Another report comes from the DPReview forums where a member said he contacted one of the Samsung stores in Hong Kong and asked about the availability of the NX1. “No, the NX1 has been discontinued by Samsung and we are not able to buy any more stock,” the store told him. When he asked for clarification the store employee added that the camera is no longer in production.

A third report came from another reader, this time from Australia, who visited a local camera store in Brisbane and claims the salesperson told him Samsung Cameras are pulling out of Australia due to disappointing sales.

A quick search on some of Samsung’s local websites reveals that the NX1 is still listed in Italy, Germany, the UK and Belgium. It is not listed at all, however on the French and Swedish websites. The Australian website still has the camera listed, but the buy button has been replaced with a ‘wishlist’ button. It’s also listed in Hong Kong, but no purchasing option available there either.

It’s also worth mentioning that some of the local websites offered only the camera or only various kits, making it seem like each country is offering its remaining stock rather than the entire product line.

Samsung has probably invested too much money in developing its sensor technology and image processors to quit the game completely, though. My guess is that the company is either taking a step back as it works on launching a better line of cameras or that it will (temporarily?) focus on manufacturing components for other companies.

Time will tell, but either way this will be interesting.