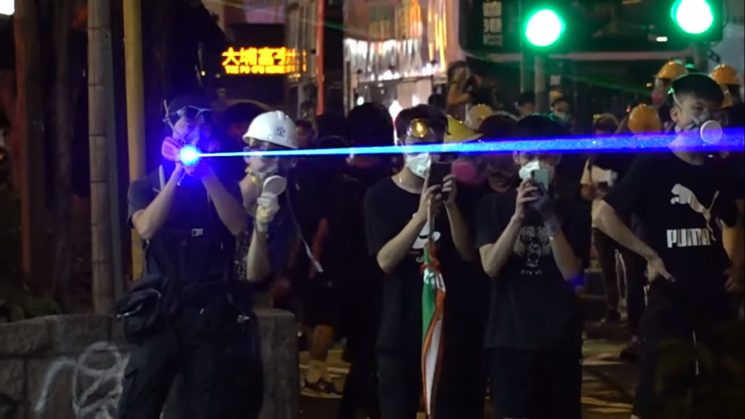 Pro-democracy protesters in Hong Kong have been using laser pointers to distract police officers and confuse facial recognition cameras. But while they are beating facial recognition, they are also causing more serious problems for police officers and photographers covering the protests. The laser beams have caused eye damage to several people so far, and they have been frying camera sensors as well.

Since June current year, people have been protesting against an extradition bill proposed by the government of Hong Kong. It would allow local authorities to detain and extradite people who are wanted in territories that Hong Kong does not have extradition agreements with, including mainland China and Taiwan.

The protesters are using laser pointers to confuse the police and the facial recognition cameras which are used to identify them. Journalist Alessandra Bocchi ​​​​​recently posted a video on her Twitter account to demonstrate what this “cyber war” looks like.

Chair of the non-profit GDI Foundation, Victor Gevers, told CBC News that Hong Kong’s authorities are using several types of facial recognition technology to track the city’s population and protesters. Some of them are so advanced that they could reportedly tell a person’s ethnicity, calculate how they look with or without facial hair, detect their mood, and even read lips.

“People are trying to avoid facial recognition by using masks, scarves and hoods. But they are also using more aggressive techniques like laser pens which create a lens flare when a camera gets hit,” Gevers said. He added that he understood the protester’s concerns, but he still advised against using lasers. They could seriously hurt people’s eyes, and even cause irreversible blindness. “And if they hit the windshield of a helicopter or airplane, that could be disastrous,” Gevers added.

There’s no word on how many cameras have been destroyed by these powerful laser pointers so far, but we have seen even weaker lasers fry all kinds of sensors, from those in Sony A7SII and A7R II to $20K RED Epic. But there’s, of course, a bigger problem, considering that these lasers could damage people’s eyesight.

While using lasers is a clever and unconventional technique to confuse facial recognition cameras, its consequences, sadly, go far beyond that. According to New China TV, nine police officers have reported eye injuries by laser beams so far. Because of this, officials and doctors are repeatedly appealing to the protesters not to use lasers.