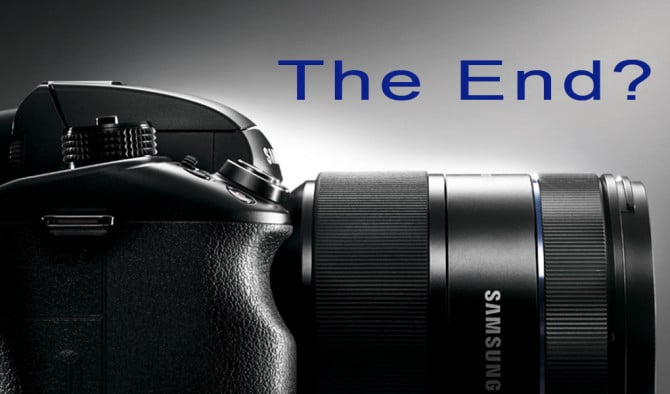 This next rumor is to be taken with a chunk of salt, but it’s a huge one if true.

Samsung’s cameras haven’t exactly taken over the camera market, and it’s said that management has decided to pull the plug on its digital camera business.

The South Korean company has not issued a statement regarding the matter as of this time, but Korean journal “Newstomato” reports that a decision to stop all development was made back in July already.

Without an official response one way or another, forums are filling up with “proof” that the electronic giant will or won’t shut down its camera division.

The Korean journal quotes a “camera industry insider” as its source and adds that Samsung has announced no new products or taken any marketing initiatives since the announcement of the NX500.

The article, though difficult to understand the Google-translated version of it, also states that the company has been losing money in recent years.

The Mirrorless Rumors admin says that he has “got similar rumors the past weeks but didn’t want to post them because that’s the kind of rumor that hurts company sales and needs to be triple checked before to be posted!”.

Photo Rumors points out that both the NX1 and NX500 are currently being sold for $200 and $150 off, respectively.

PR also quoted a post from 2010 where it wrote the following:

“In an interview with AP, Samsung’s vice president of camera business Jeong Wook Kim said that Samsung is “determined” to be #1 in the mirrorless camera market by 2012 and be “the best selling camera brand” by 2015”.

I think it’s safe to assume that Samsung has known for quite a while now that it won’t reach its ambitious goal from 2010 and has since adjusted its expectations, but such a quote definitely makes this rumor seem at least a bit more possible.

Arguing that it’s business as usual over at Samsung, some readers have pointed out that the NX series has been selling at discounted rates for a very long time, much earlier than July.

It has also been pointed out that Samsung is one of the sponsors of the Photoplus show that will be held in New York next month, and the countdown timer features a photo of an NX1 and a link to Samsung’s digital photography website.

Many companies miss their goals, fail to reach their targets and lose money. It’s important to remember that Samsung is a huge company, as is its electronics division, and losing money for a few years is not a big deal if it has its heart set on becoming a prominent player in the digital photography market.

Hopefully Samsung will issue a statement in the coming days letting its customers know what’s going on, but until then I’d say it’s too soon to assume we’ve seen the last of Samsung cameras.

More reports of Samsung shutting down its camera business

« The Tesla Drone Concept Boasts 30MP Camera, 4K Video, 60 Minute Flight Time, & Eliminates Need For A Gimbal
Your Android Lollipop Camera Has a bug That Can Bypass The Lock Screen »