One of only 359 ever made, this particular Nikon Nikkor-P 1200mm f/11 lens is probably one of the most pristine examples still around, and now it can be yours if you have a spare $6,000 burning a hole in your pocket.

Up for sale on eBay by user nikon_and_wine, the lens is being describe as “nearly MINT” and the photos certainly seem to back this up showing no fungus and barely a speck of dust.

This Nikon 1200mm lens is in a close to new condition with no shortcomings.

According to Photosynthesis, the serial number of this lens puts it being manufacturered between 1974 and 1977. It’s probably towards the early end of that range, making the condition of this lens very impressive. The lens weighs a little over 3kg, about twice as heavy as the current model Nikon 70-200mm f/2.8VRII, surprisingly light for a lens so large, but then its maximum aperture is only f/11.

With only 5 elements in 5 groups, it’s a very simple design, uncommon in a lens so long, which goes a long way toward explaining the relatively light weight.  Despite this, with the focusing unit this lens still sits at 3 feet in length (922mm).

It’s not as beefy as some of the other big lenses we’ve shown you recently, like the Zeiss 1000mm f/5.6 or the monstrous Birns and Sawyer 1000mm f/4.5, but it’s still an impressive piece of glass. 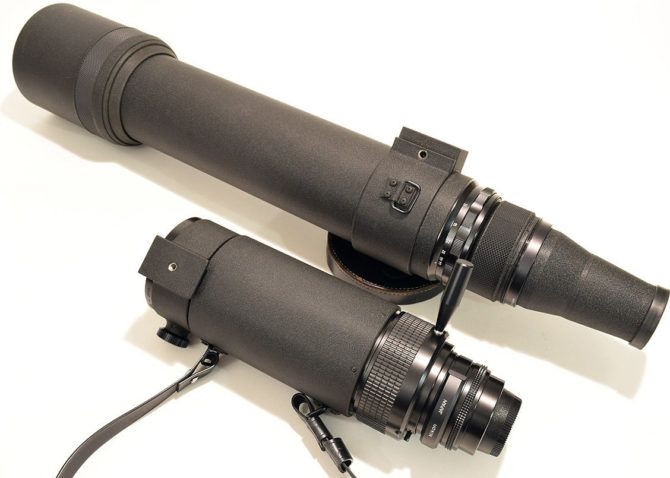 The lens retailed for $950 when it was released.  Adjusting for inflation, that works out to around $4863.  At $5,750 + shipping, this listing’s price is a little higher than it would be new, although if you need that kind of focal length and quality glass, it’s probably one of the better deals available.

So, if you’ve been after a super telephoto lens for your Nikon (or even for Canon, with an adapter), then what are you waiting for?  Now’s your chance to own a rare piece of Nikon history, even if you do need a supernova going off in the background to light your scene.

Anybody tempted?  Do you already own one of these rare beauties?  What do you love or hate about it?  Let us know your thoughts in the comments.