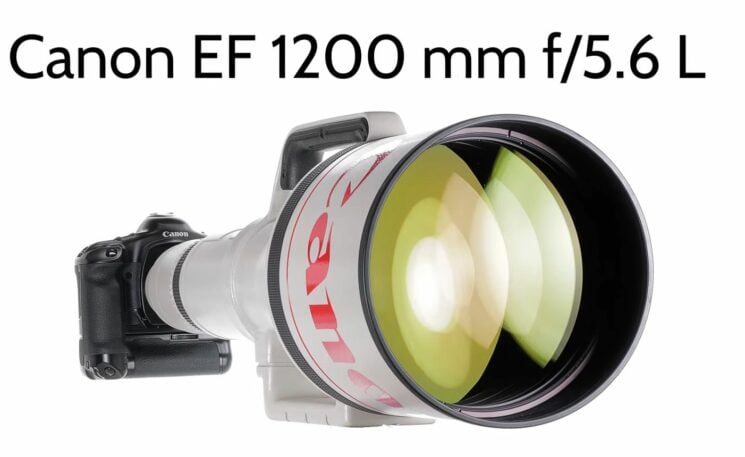 Canon’s 1200mm f/5.6 is generally regarded as the stuff of myth and legend. Of course, the lens exists, but there are so few of them out there that the vast majority of us will never even see one in person, let alone get to try one. Originally manufactured in very limited quantities by special order only in the 1990s, it came with the princely sum of around $90,000 and it’s estimated that only around 20 were ever made.

One of these extremely rare lenses popped up at the Wetzlar Camera Auctions last week, and a bidding war sent the price sky rocketing to a whopping €500,000 (around $580,000). This isn’t the most valuable lens out there, but this is the highest amount that a lens has ever fetched at auction.

There isn’t a lot of information out there about the lens – after all, why would there be, it wasn’t exactly aimed at a mass market, but Canon did say on their website at one time (quoted from here, although the page on the Canon website now comes up Error 4040):

This remarkable lens is the longest in the world with full autofocus capability. Two fluorite elements for superb image quality, make it ideal for many professional applications where it’s impossible to get close to the subject. Fully compatible with any EOS SLR, including digital bodies, autofocus performance is silent and instantaneous thanks to the Ultrasonic Motor. It’s also compatible with the Canon Extender EF 1.4x II (making it a 1700mm f/8) and EF 2x II (2400mm f/11)

Regardless of how practical this lens is for most of us, and even if we don’t shoot Canon, it sure is a thing of beauty. It uses massive fluorite crystals to create its lens elements with growing times that meant the lenses took a whole year to make. Canon are said to have only made about two of them per year due to the rarity of the crystals, few of which are known to exist today.

It contains 13 elements in 10 groups with a minimum focus distance of around 45.9ft (or 14 metres) and only a 2° 05′ diagonal angle of view. It takes 49mm drop-in filters (because, really, even if it has a thread on the front, who makes filters that big?) and it’s autofocus. It features an internal focusing system with USM, meaning that it should still work on the latest and greatest EOS R5 and EOS R3 bodies with the EF to RF adapter.

I suspect this auction will have now also massively increased the value of the few others out there in the world. Some people are going to have to be calling their insurance companies to let them know!