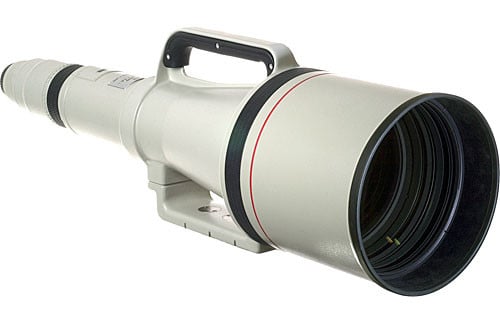 In case you missed out on the NASA 2540mm f/8 lens that was recently sold on eBay, B&H have what might just be the next best thing – the super rare Canon 1200mm f/5.6L EF USM autofocus telephoto lens.

The lens will cost you as much as a US Navy Warship, but will get the job done when you just can’t get close enough.

With only a dozen or so of these beasts ever created, the proud owner will be in the company of National Geographic, Sports Illustrated and probably a few spy agencies.

Photographers are invited to get a look at the lens at the New York superstore, and take a selfie with it if they don’t happen to have the necessary funds at hand.

The reason this lens is so much more expensive is probably due to its 9+ condition rating. As stated by B&H’s used equipment rating system, the rating means the lens “shows little or no signs of wear”.

According to B&H this is the longest fixed telephoto lens ever built by Canon, and calling this lens with its 2° angle-of-view and 49.5’ minimum focusing distance a ‘tele’ “is like calling King Kong a monkey”.

These lenses are not only extremely expensive and hard to find, they are now also discontinued. They were built-to-order from 1993-2005, by hand of course, and even if you had the money for one you still had to wait 18 months to get the lens.

Most items at B&H qualify for free shipping, but in this case it seems whoever buys the lens will be expected to throw in a few more bucks for shipping. A sturdy tripod and head, both highly recommended, will also cost you a pretty penny, but if you can afford the lens you can probably afford paying a bunch of people to carry it around for your and hold it up when you’re ready to use it.

There’s not much official information out there regarding these lenses, but Canon do say this:

“This remarkable lens is the longest in the world with full autofocus capability. Two fluorite elements for superb image quality, make it ideal for many professional applications where it’s impossible to get close to the subject. Fully compatible with any EOS SLR, including digital bodies, autofocus performance is silent and instantaneous thanks to the Ultrasonic Motor. It’s also compatible with the Canon Extender EF 1.4x II (making it a 1700mm f/8) and EF 2x II (2400mm f/11)”.

So for those who were complaining at the beginning of the post that this measly 1200mm lens can’t replace the 2540mm NASA lens, I hope this put your mind at ease.

Weighing in at 36.2 lb at being 33 inches long, I was not surprised by the following rating the lens received:

“Too heavy. Pretty great lens overall. Very sharp and accurate color tones. Only complaint is it weighs too much. You will definitely need a tripod unless you have Dwayne Johnson assisting you”.

All in all, and despite the impressive optical quality, this lens isn’t regarded very highly based on the reviews:

“Doesn’t bounce. Worst pogo stick ever, hardly bounced, and when I did get a few bounce lots of glass and stuff started falling out, just not safe for kids”.

“not great for macro use. I would rate this lens higher, but i was trying to get a shot of the wedding rings and it would not focus close enough. also i wanted to buy a UV filter to protect the front element, imagine my shock that it would have to be custom ordered!!! works ok hand held, hope they make one soon with VR”.

Below is a longer video showing off more of the capabilities and features of the lens:

Personally I’d recommend staying away from the lens; finding a backpack for it will be a pain in the butt.