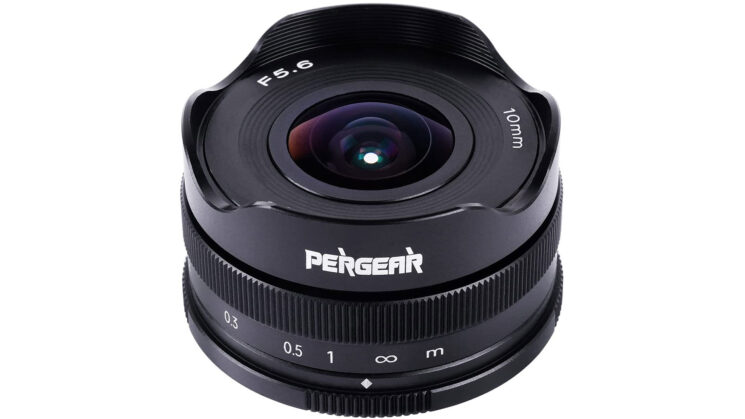 Pergear has released their new 10mm f/5.6 fisheye lens for APS-C mirrorless cameras and Micro Four Thirds. It’s been released in Sony E, Fuji X and MFT mounts, but unfortunately for Nikon shooters, the company has confirmed to DIYP that isn’t coming in Z mount flavour (at least, not yet). But for those systems it is available on, it features a full-metal construction and comes with a very low $89 price tag.

Being a fisheye, it naturally offers a very wide angle of view, at 172°. This is significantly wider than the 150° offered by Pergear’s 10mm f/8 fisheye lens. It has a built-in petal-shaped lens hood to provide a little flare protection, although with a lens this wide, it’s often going to be difficult to not capture light sources in the shot.

The small, compact lens is only around 5cm in diameter and 3.2cm long with a weight of only 120g. And when the built-in lens hood doesn’t block the light sources, a multi-layer coating on the front element helps suppress ghosting and flare and to increase contrast and colour. With a minimum focus distance of only around 15cm, you can get some pretty wild looking close-ups, too.

With regards to Z mount, Pergear told DIYP that it isn’t currently available for Nikon APS-C mirrorless, although there does appear to be an Amazon listing for it. So, perhaps it’ll come at some point in the future.

For the others, though, the lens is available to pre-order now for $89.99 in Sony E, Fuji X and MFT mounts and it’s expected to ship in November.