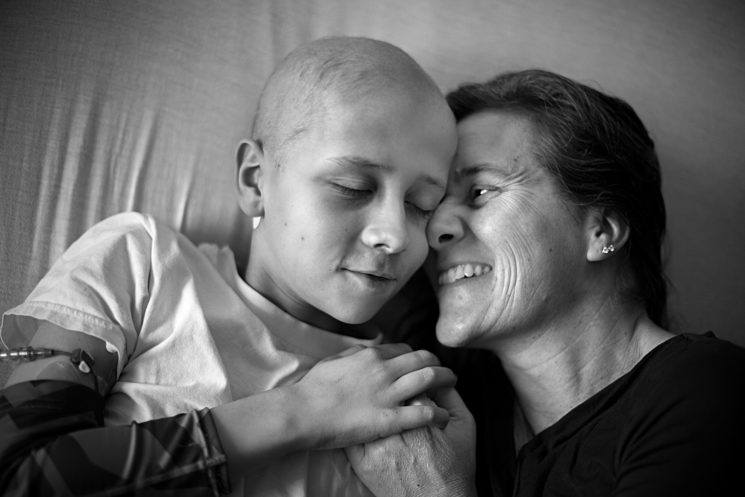 11-year-old Jaxson hugs his mother on his first day back in the hospital. After 3.5 years cancer-free, Jaxson has renewed his fight against neuroblastoma. This was taken a few days before Mother’s Day, printed, and delivered as a gift to mom.

“This is the last picture where the family photo will have 5 children instead of 4…” John Maniaci tells me, before trailing off, letting the meaning of that simple sentence sink in. “What I’m doing in the children’s hospital is incredibly powerful.”

Some photographers invest their lives in finding beauty in the most unlikely of places. For John Maniaci, that turned out to be an intensive care unit for children at UW Health.

“I’m a long-time newspaper photographer, but at some point, I saw the writing on the wall,” John tells me. “Lots of very talented people started losing my job. One day, I realized thatI needed to work another 20 years, but that my newspaper gig probably wouldn’t be around for that long. I started looking for something else, and in the process, I found my dream job.” 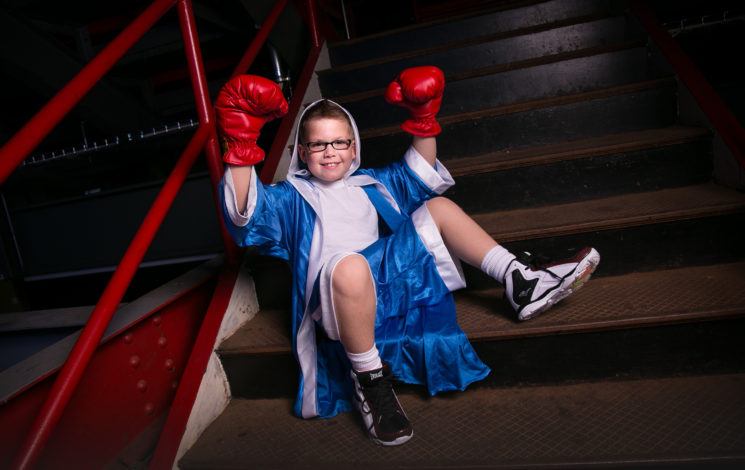 John took this photo of Austin on the 2-year anniversary of him being declared cancer free.

The story started around 2007, when John started looking around for a way of applying his photography skills to a different genre than news.

“I saw that UW Hospital created a full-time photographer position. I applied in 2009,” he says, with a smile on his face, “It’s the best decision I ever made.”

As the hospital’s full-time photographer, John’s job is to document the goings-on at the hospital. One day he might be there to capture a staff party. Another, he’ll be taking portraits of a new surgeon that joins the staff. He’s one of 15,000 employees at the hospital, and the way he describes it, he wants to give the hospital their money’s worth.

“Some of the most meaningful work I do is in the children’s hospital,” John says. “It all started in 2009, when I met a boy who was fighting cancer. I said ‘lets’ get a photo with the Christmas tree in the lobby’. It was a simple idea, but the children loved it.” 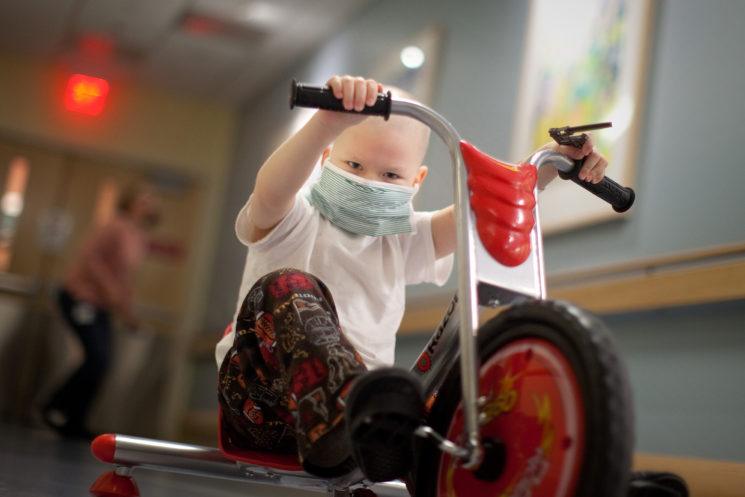 Austin again, as he was riding his trike around the hospital hallways.

And that, as they say, was that. The year after, John tried to get Christmas portraits with as many children as possible. Then they added valentine’s day photos. Father’s and Mother’s day photos. And soon, any excuse to create beautiful postcards was utilized.

“Everyone is on social media,” John says, explaining why this work matters so much. “As a parent, it doesn’t matter if the kids are at soccer practice or receiving chemo. Documenting what’s happening and seeing in photographs continues to be important. I take family pictures, I do senior portraits, and everything between.”

The hospital itself has 30 or so clinics, and John shoots between 400 and 500 assignments per year. It may be weird to think about a photographer at a hospital, but John disagrees. He represents around 0.0067% of the hospital’s staff, and costs about half of an X-ray machine. 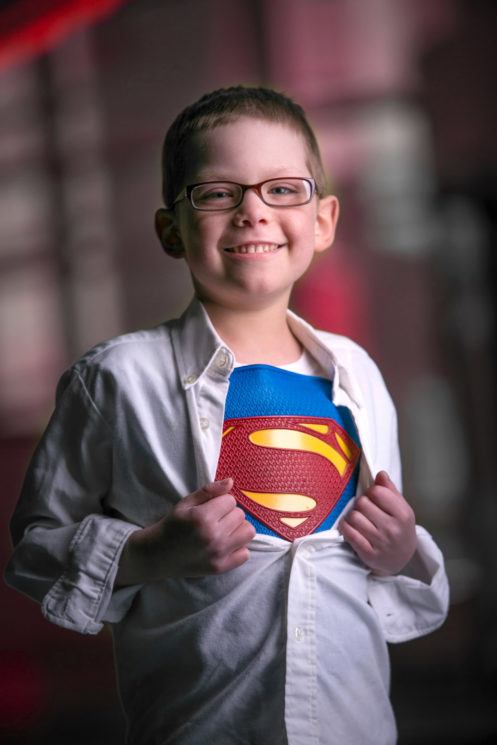 Austin reveals his inner self — which may have played a role in beating the Acute Lymphoblastic Leukemia he was diagnosed with, two years old.

“It costs them almost nothing to have me on staff,” John explains, “And because I’m salaried, I can fill my downtime by creating meaningful images. It helps the families deal with challenging situations. I can do some beautiful work in 20-30 minutes. Setting up doesn’t take that long, and the return on the investment is enormous.”

Most of the time, John shoots with available light, but he’s not shy about making a bigger production either. He walks around the hospital with a little trolly containing all the gear, including 3 Dynalights, a soft box, and an umbrella. 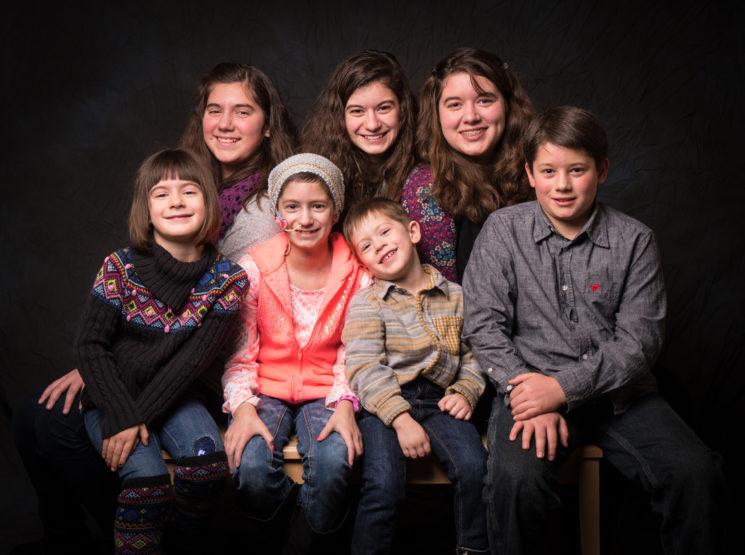 While Josie battles her cancer, her mom requested family photos with all the siblings the day before an especially daunting surgery. The only way to do it was to bring the studio to them. Photos were delivered to the family so they could share at their leisure.

“People see my roll around and see the light stands sticking out of the cart,” John laughs. “They’ll ask me if I’m going golfing.”

A lot of the skills carry over from the field of news photography. In a hospital setting, you still have to capture photos quickly, and deliver high quality work consistently. John has to work fast, work quietly, and stay the hell out of the way when the intensity in a room boils over because something happens.

“I have to boil down every situation to its essence,” John explains, drawing another parallel with news photography. “I have to tell the full story in one or two shots. It’s all about looking for the truth of what is going on.”

For the hospital, there’s a bigger value in having John on staff, too.

“I’m often the only person who walks into a patient’s room who doesn’t want them to pee in a cup or stick them with a needle,” he smiles. “Being in some photos offers a welcome  reprieve, enabling children to be children for a while.”

“I run into really difficult situations,” John said. “One example… there was a woman who was about to give birth, but was in a car accident. The baby didn’t make it. She had to give birth to a stillborn child. I went along and took photos of them taking photos with the child.”

“I have 3 children myself, so it’s an incredibly difficult assignment for me. But it’s worth it. These photos means so much to the parents,” John explains, his voice thick with how much he cares about the subjects of his photos. “At the funeral service for the baby, they had enlarged versions of the photos I took. It became the only family photo that could ever exist, but they have a record of having had that moment with the baby. It’s an incredibly powerful image.” 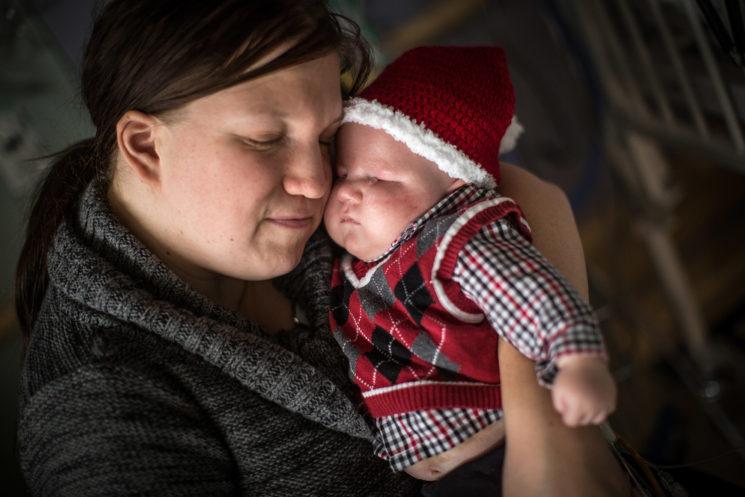 Marshall was born without eyes. This was taken in for our Christmas Card program where we take pics of any and all family that would like pictures taken for a holiday card or just a holiday family photo.

This photographer is capturing childhood at its simplest, sheltered from TV and electronic devices