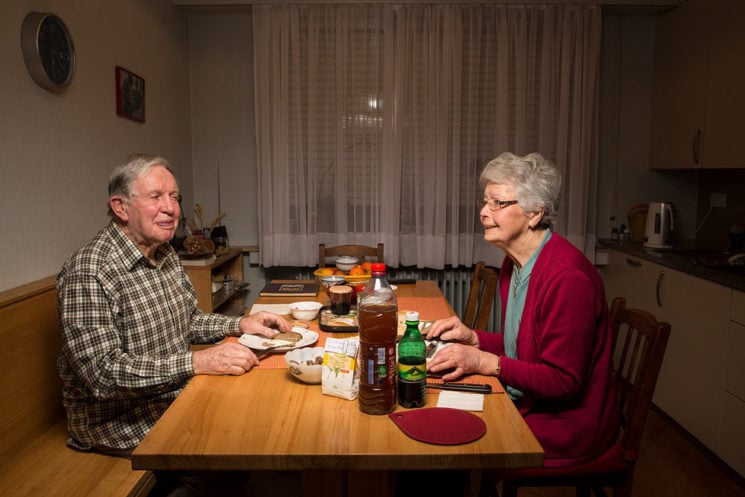 Each of us has different habits and routines in our daily lives. Milwaukee-based photographer Lois Bielefeld captured these routines in a fantastic photo series named Weeknight Dinners. The people in her photos are just like you and me: everyday folks eating their usual dinner on a weeknight. Two years and 78 portraits later, Lois presented us with the project that shows how diverse and interesting people’s habits are.

Lois chose to capture the dinnertime from Monday to Thursday, which is when most people don’t have so much time to prepare a huge meal and gather the family around. As a result, you get to peek into the daily lives of others for a brief moment and see how different we all are. The photos made me feel like I could share the moment with people in them. I spoke with Lois about her project to find out more about it, and I bring you some charming and informative stories of Weeknight Dinners, along with some wonderful photos. 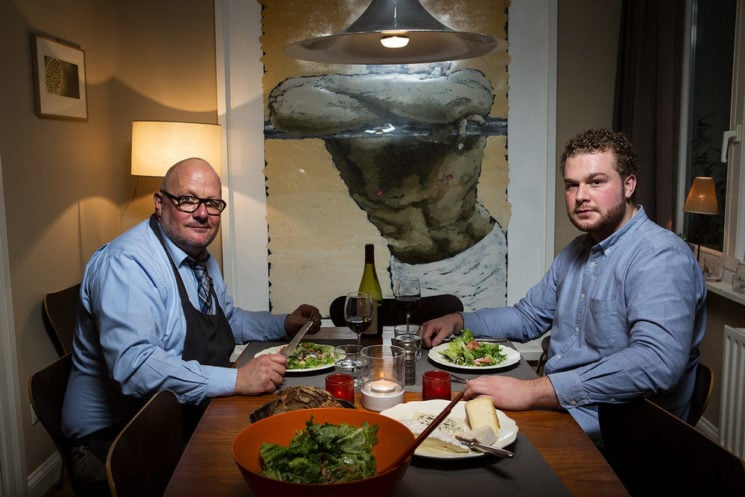 Lois traveled the USA in search of her subjects, but the part of the project was created in Luxembourg. She spent the period between 2013 and 2015 working on this project and came up with 78 portraits. Since it’s really a lot of families, homes and dinnertimes, I was curious to know: how did she find the people to pose for her?

“Often when I begin a new series, I reach out to people I know and often whom I’ve photographed for other series (I love seeing different views into the same people’s lives over the span of time and sometimes space). As a project progresses I start reaching out to strangers in a variety of ways. Sometimes in public I’ll see someone and approach them, other times people will recommend people to me. I have also posted about projects on community forums and bulletin boards (both online and physical). And if I’m looking for someone specific (say someone who lives in Tulsa, OK) I’ll often put something out on FB and see what surfaces.”

As I mentioned above, a part of the series was also photographed in Luxembourg. Lois spent 10 weeks there in 2015 through the Museum of Wisconsin Art and the Ministry of Culture in Luxembourg. When in the USA, she needs to balance working a full-time job, being a mother, being a partner, and being an active artist. But as for her time in Luxembourg, she says this was the first time she was able to focus only on her art, and it was an amazing experience:

“I worked on two bodies of work while there—when I first arrived I made 16 Weeknight Dinner portraits. This provided me a direct window into the culture and something to immediately begin working on while I was trying to figure out what specifically Luxembourg project to focus on. I eventually made a series called On Faith, which contains portraits and an audio installation centered on the changing landscape of the Catholic Church during the country’s separation of church and state.”

There was one thing I noticed in the comments on the Weeknight Dinners project. There are quite a few people in the photos eating alone, and many comments described it as “heartbreaking.” I asked Lois how, as a photographer, she got connected to the people she photographed. I was wondering if she’d heard their life stories, and if they are really “heartbreaking.”

“Yes, I often become quite close with my subjects as I often will re-photograph people for different series. There is an intimacy that transpires between photographer and subject- a sharing of one’s life.” 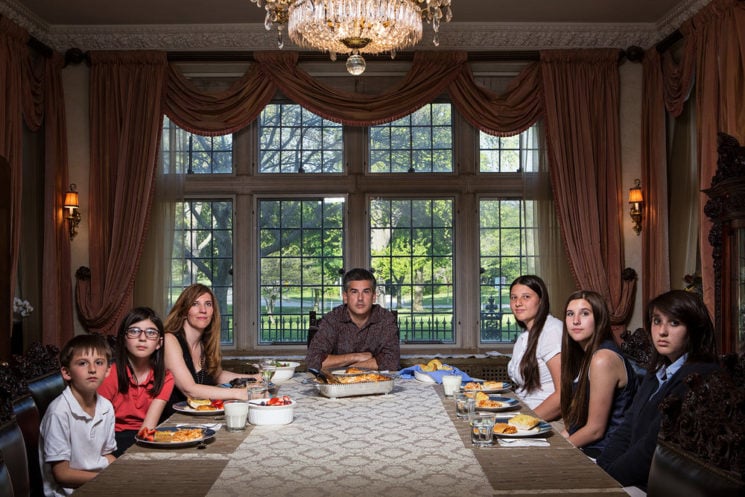 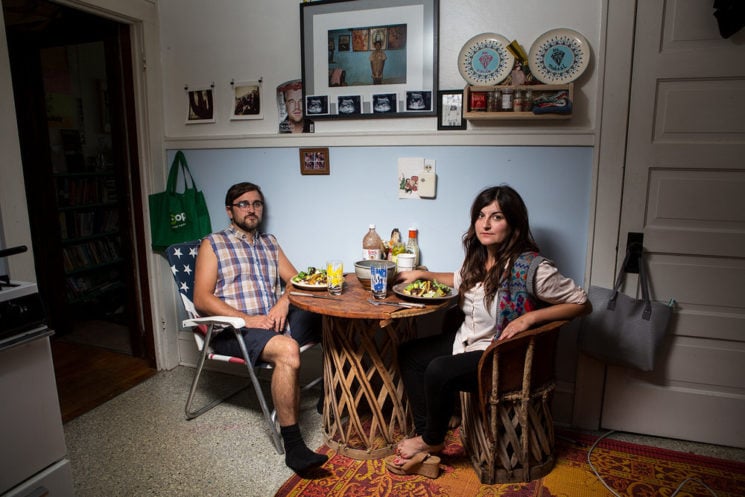 She says many people have shared with her their memories of their meal times growing up. Sometimes these memories would be of warmth and fuzziness, while for the others, they were about mealtime full of tension and apprehension.

As for the eating alone part, personally, I love it. I don’t see anything sad about it, and it turned out Lois and I share the opinion. She believes comments like this speak to two things:

“The first is that viewers bring their own stories, narratives, and projections to every photograph they look at. Ultimately it says a lot about the viewer and their own feelings about eating alone rather than the person in the photograph. In my mind there is absolutely nothing “heartbreaking” about eating alone – it’s practical, and often wonderfully enjoyable to have some time to oneself.  I also think people are often reacting to the fact that I often don’t have people smiling in the photograph. I’m looking for an honest expression as I’m making a portrait of the person or family. In this day of social media/selfie-land everyone has their camera-ready or camera-approved face, which I am not interested in at all.  But as a result, viewers may project ideas of anger, sadness, and loneliness rather than just recognizing it as an honest serious expression.

Secondly, and quite related to the previous point, I think some viewers’ reactions speak to a deeply embedded American ideal of what dinnertime is or rather should be. There is something quite rooted in the American psyche regarding dinner. The American ideal is to eat a home-cooked meal as a family around a table with no distractions while talking about the day. When thinking about this project I was very interested in this ideal versus the reality, which has very much so played out in my subject’s mealtimes (including my own). Yet, we continue to measure ourselves against the idealized narrative that has been continually re-enforced through advertising, television, and movies since the 50’s of what the American family should look like and how it should act.” 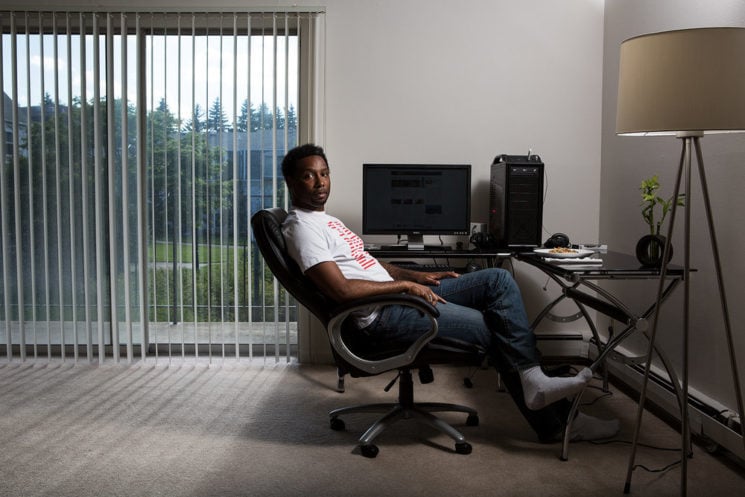 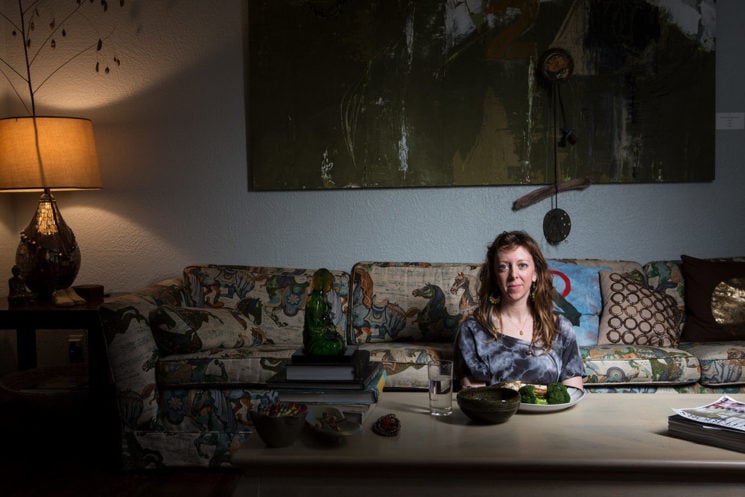 Since dinnertime is not the usual time people are photographed, I asked Lois about the process of taking the photos. She believes “we are our true selves when we are performing daily ritual of eating.” So, she would ask her subjects to prepare whatever they normally would for a weeknight dinner. She wanted to capture ordinary Monday through Thursday meals, but there would sometimes be quite a rich meal on the table after all:

“I can’t control how people want to present themselves and occasionally I’d show up and there would be this elaborate meal with a Cornish game hen and fancy bowls with raspberries in it! But this is just as interesting and part of the series – how people want to be perceived as opposed to their reality and normal habits.” 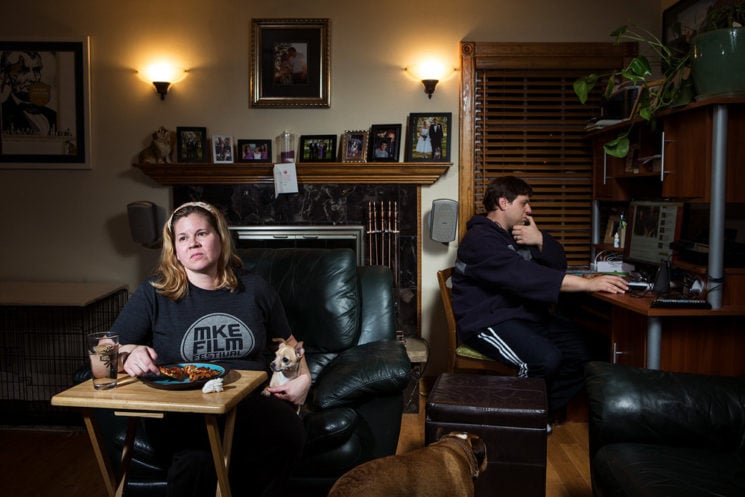 When it comes to the process of photographing, it would normally look like this: Lois would arrive about 45-60 minutes before they planned to sit down and eat. As the subject prepare the meal, she sets up:

“I light where my subjects’ sit and sometimes the space, although I try to maintain some of the ambient light’s feeling and presence. I’m working quickly, seeing their space for the first time, and usually working from my gut with lighting and camera angle. Some of the portraits come smoothly and some I struggle to get right. After the lighting and food are ready, everyone assumes their normal dinner position.”

For this project, Lois photographed the people just after they sat down to eat, but before they started eating. Between taking photos, she’d ask a few questions about their habits: “Do they cook, if so from recipes or ad-libbing? Who cooks? Tell me about why they eat here? Do they always eat together? Who does the shopping and meal planning?” This would help people feel more comfortable in front of the camera. After taking 25-30, images Lois would pack up as the subject resumes their meal.After the portrait is done some people would invite me to their table and it was always an honor to partake and share a meal with them. In Luxembourg, this was a treat since temporarily living in another country can be a lonely affair. There is an intimacy in sharing a meal with someone in their home and even more so when it’s a meal that is just their normal routine, not something specially prepared.”

Lois says her models would sometimes invite her to their table, and it was always an honor to share a meal with them. This was especially a treat in Luxembourg because she would sometimes feel lonely living on her own in another country. She adds that “there is an intimacy in sharing a meal with someone in their home and even more so when it’s a meal that is just their normal routine, not something specially prepared.” 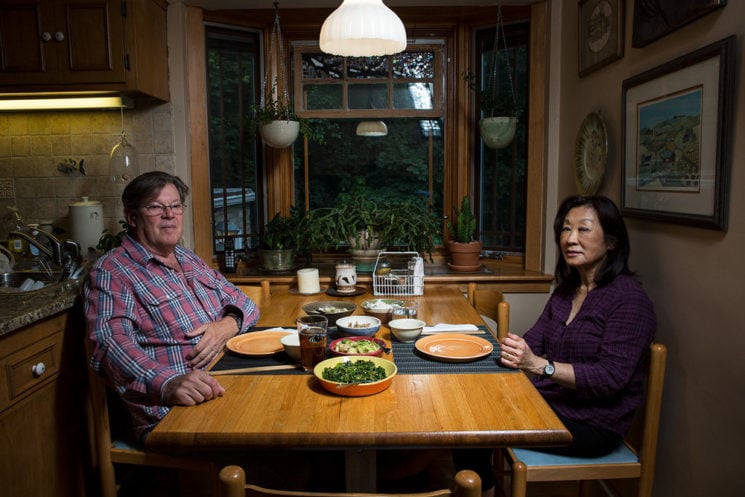 I also asked Lois about the technical bit: what kind of gear would she use, and what her preferred camera and lens(es) are:

“I use a variety of different tools. For the majority of my projects, I use a Canon 5DS R and a 5D Mark III. But I also shoot medium format film for work about my home and I have my own B&W darkroom where I process it. I wish I had more time to get in there more frequently. For lighting, what I use changes based on the project. For my lit composed portraits, I am using Profoto battery powered strobe lights and a wide range of beat-up light modifiers.”

And now, before I leave you to enjoy the rest of photos from Weeknight Dinners, here are some links to more of Lois’ work. She is represented by Portrait Society Gallery, and you can see more of her projects on her website and Instagram. 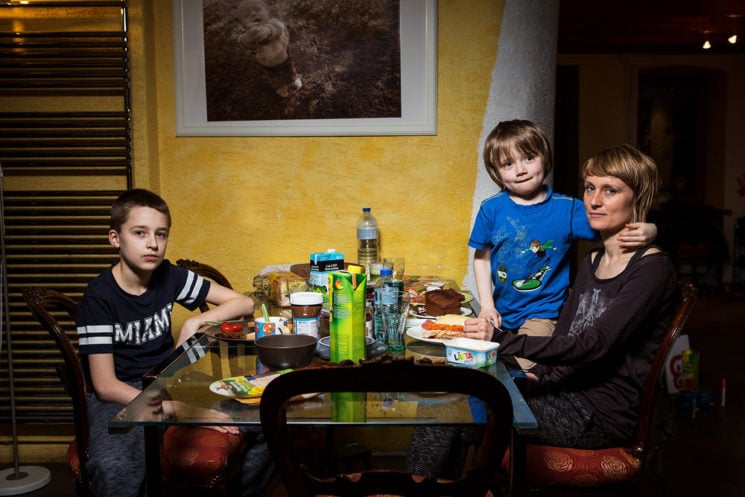 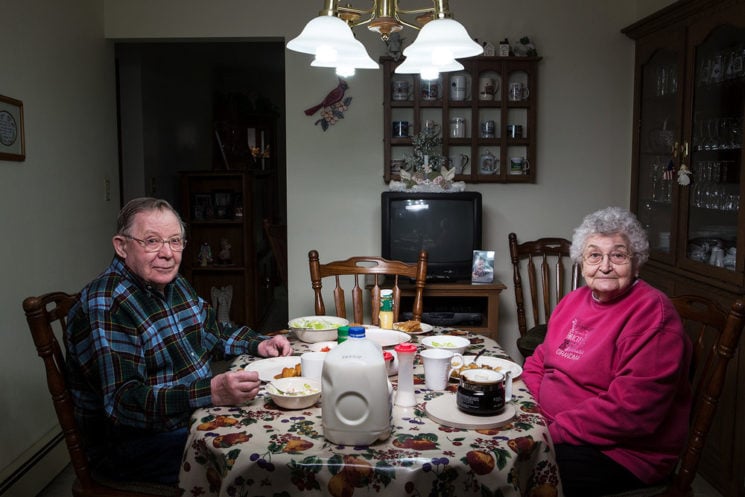 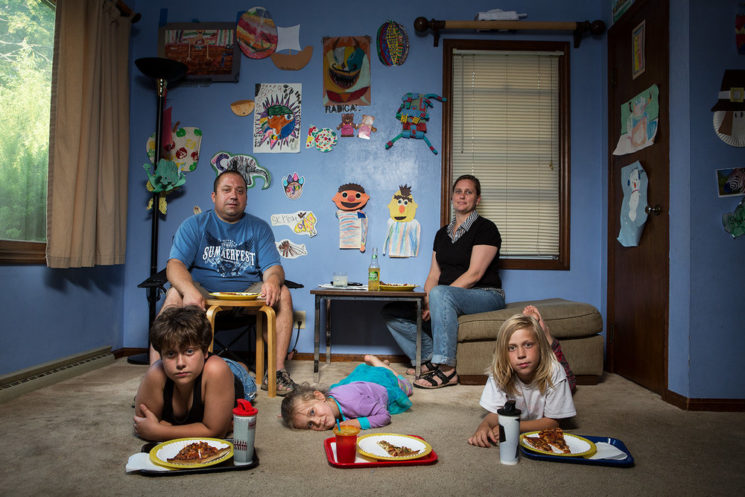 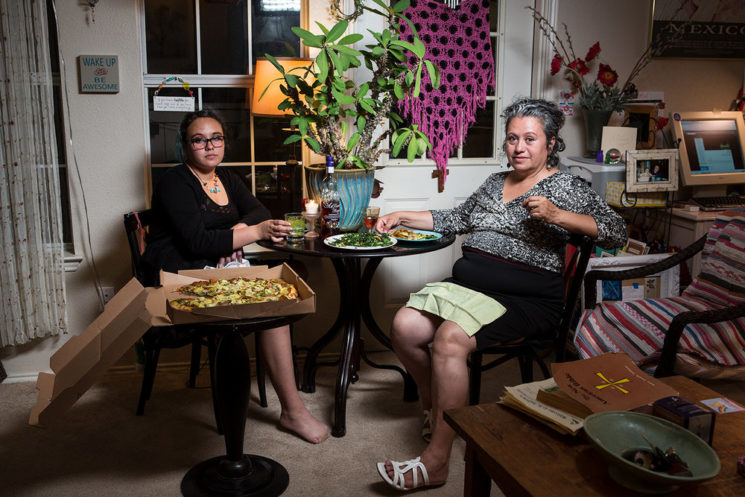 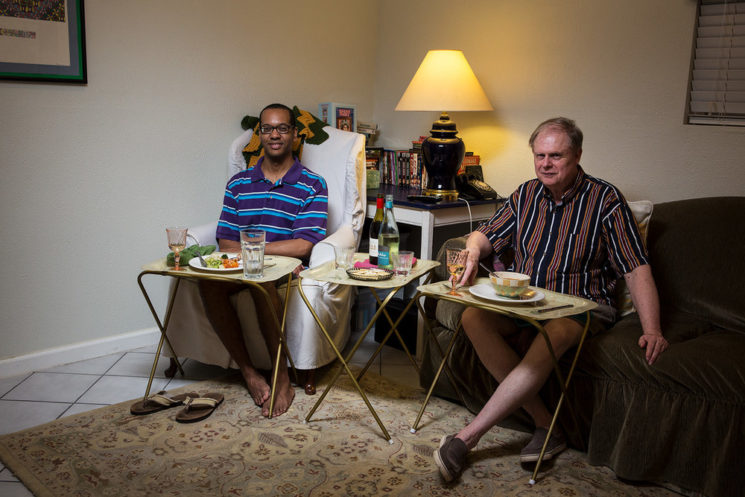 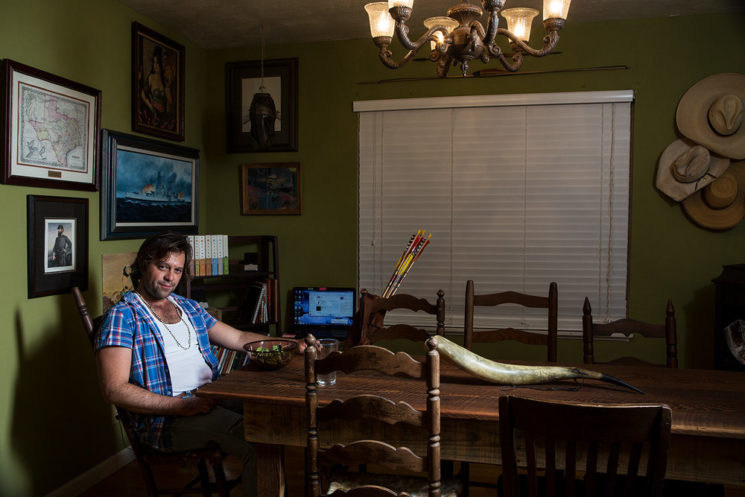 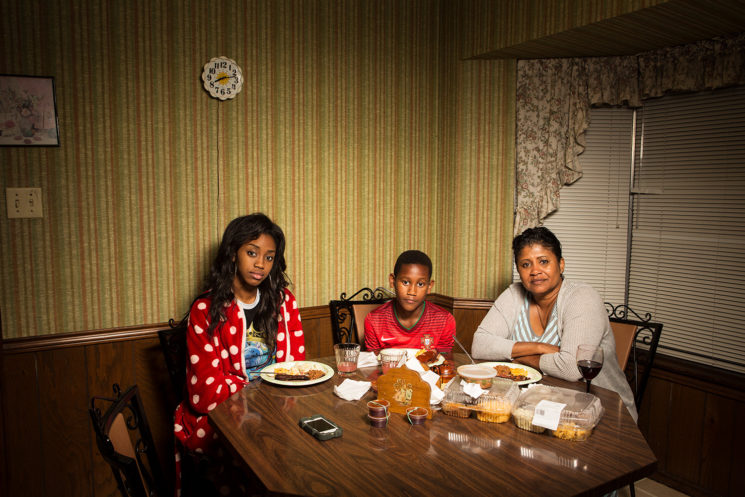 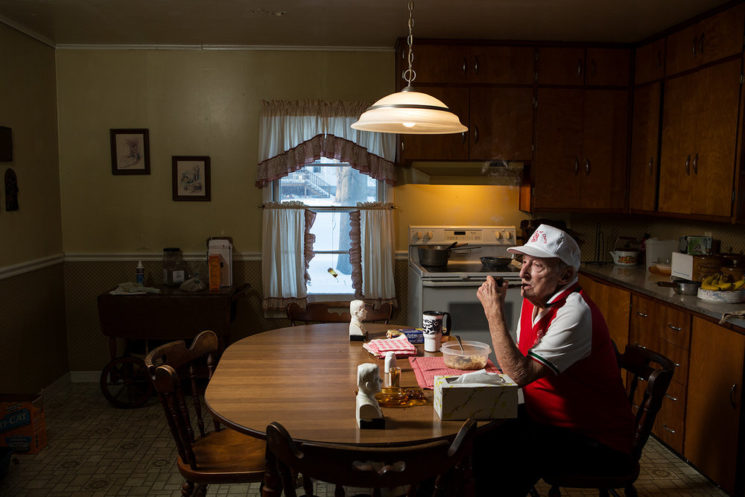 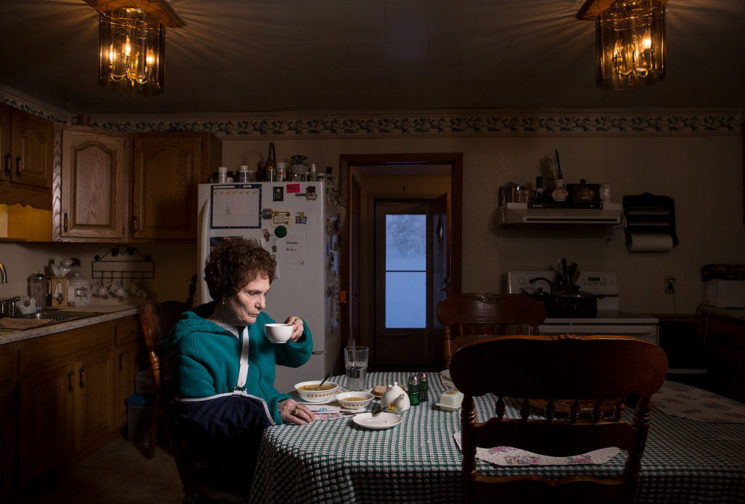 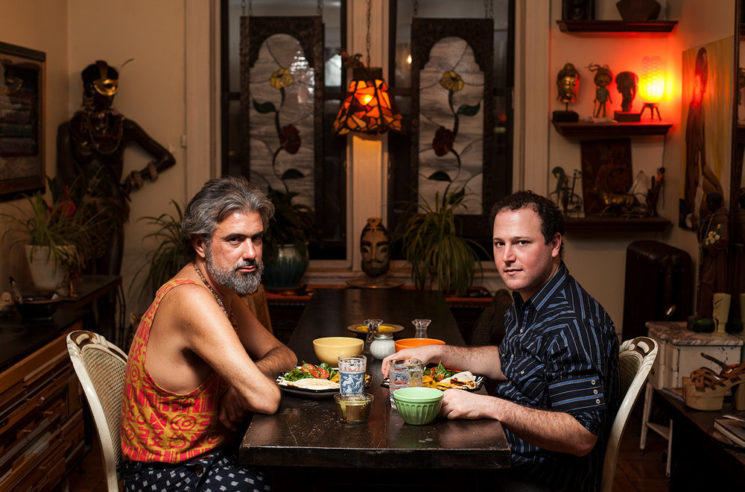 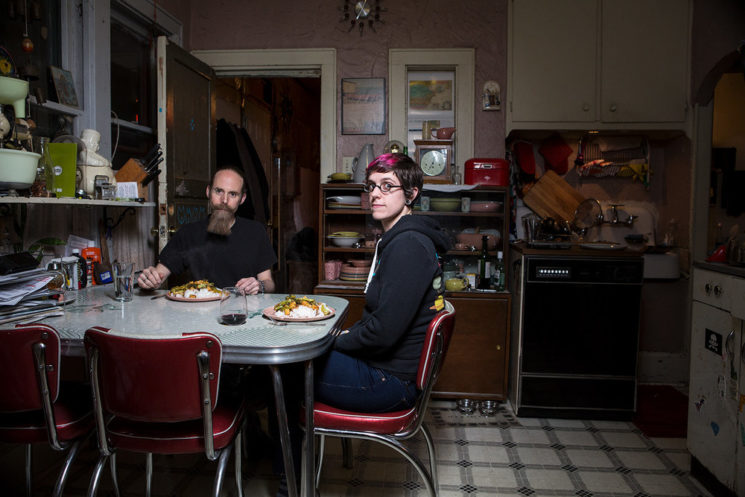 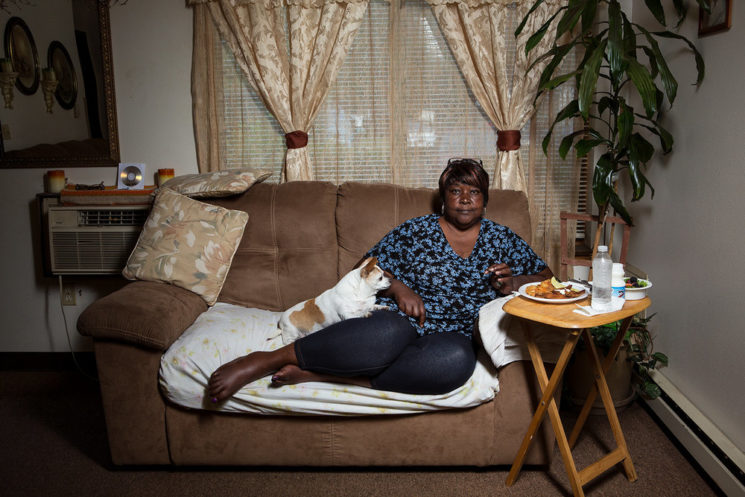 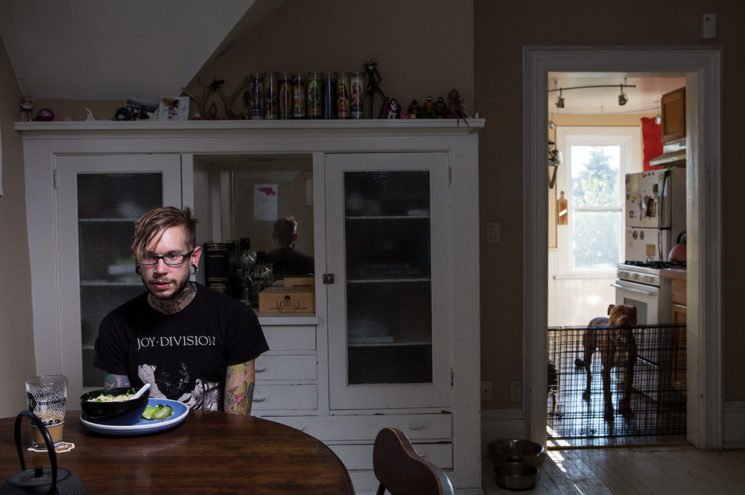 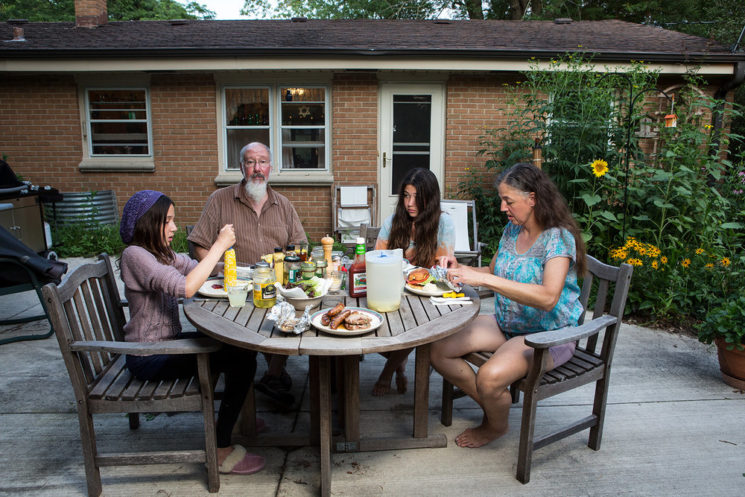 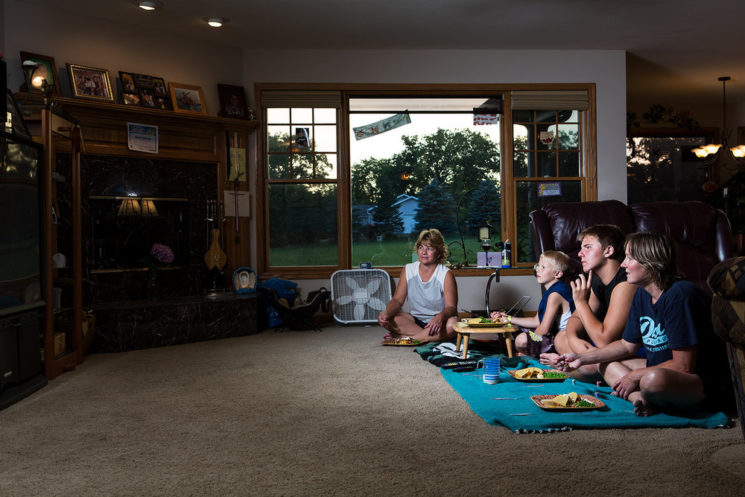 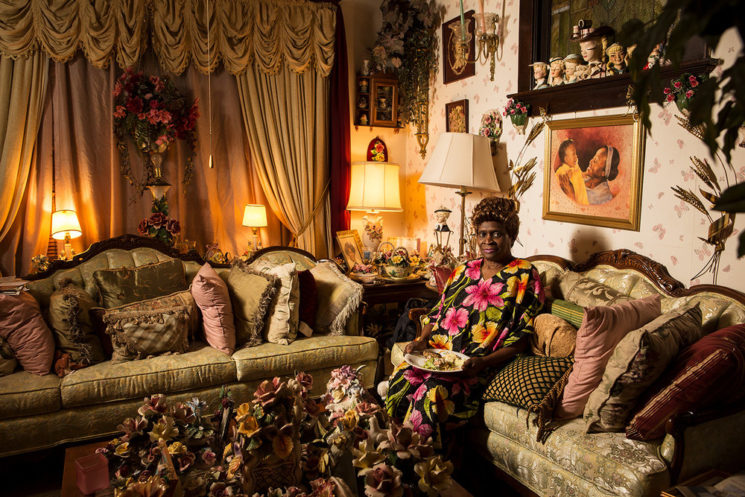 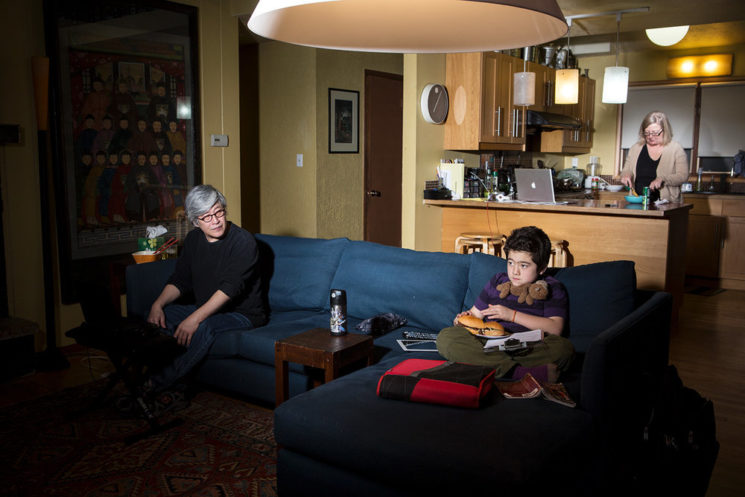