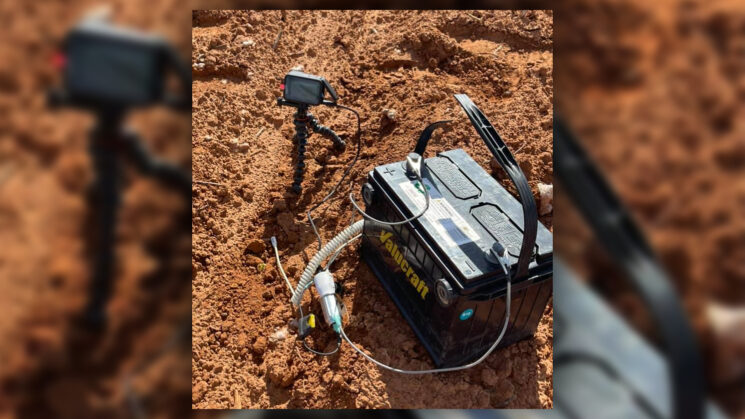 Long term timelapses are a lot of fun to shoot, but they can come with a lot of challenges. What happens if your gear gets stolen or damaged? What if it simply moves and you lose your framing? Or stops shooting entirely? It’s a constant learning experience of challenges that we have to figure out as we face them.

But probably the biggest challenge is that of power. For Oklahoma farmer Derek Chisum, who wanted to shoot timelapse of his peanuts growing up out of the ground in his field, the solution is simple. Hook the camera – a GoPro in this case – up to a car battery. Derek spoke to DIYP about his setup.

Of course, the GoPro doesn’t run on 12 volts – which is what the car battery puts out. So, he wired in an inline 10-amp fuse to a car charger that drops it down to the expected 5v for USB and left it to it. The camera is being left to shoot for a month and so far it has done about two weeks of that. Derek says that before he shot a single frame, the battery measured 12.5v on his meter. After 14 days of continuous use, day and night, it now meters 12.4v. Here’s how his first two weeks look.

Shooting a timelapse on a GoPro is challenging at the best of times, due to the limitations of this type of camera. But needless to say, power isn’t one of Derek’s problems. At the moment, Derek is looking for a better camera solution that can brave the outside weather for long periods and still shoot decent quality.

Derek did mention in a post on Facebook that he will be experimenting with a Nikon D7100 to shoot some timelapses, so perhaps something like this might be a good option for him. That will tie up his DSLR for quite a while, and it presents other problems like offloading the images and wiping the memory card to be able to keep shooting without disturbing the camera – it’s doable, though – but it would offer a lot more shooting options and a noticeable bump in quality over the GoPro.

You can follow Derek’s timelapse progress and see some of his other videos from the farm on his TikTok.

How do you power your cameras for long term timelapse where AC power isn’t an option?

« Smashing car windows at 800,000 frames per second on the new Phantom TMX7510 camera
DJI “Mini SE” drone pops up at Walmart – but is it really a new product? »