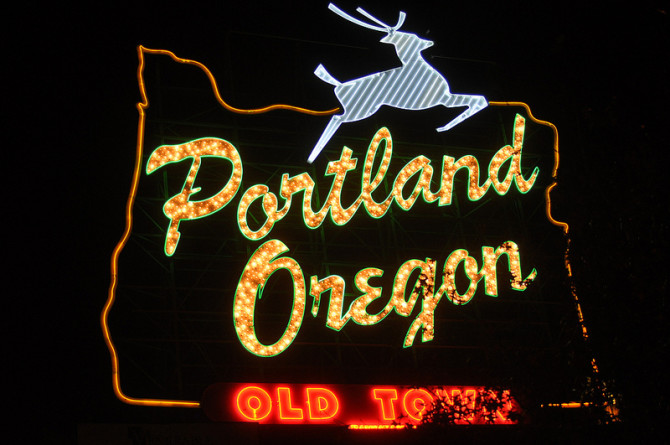 As a kid, I always loved receiving mail.  It was exciting and made one little narcissist-in-training feel important.  As an adult, I loath mail.  What isn’t junk mail is bills, and I would be perfectly content to do without.

However, one piece of mail that Portland, Oregon photographer Jeff Kunkle was not expecting was a bill for $100 from the city for selling his own photographs.

Jeff has been fascinated by vintage roadside attractions since his childhood, and over the years he has begun photographing these fading sights.  Eventually, he began selling prints of his images through outlets such as Etsy.  But, this is where the city of Portland draws the line.

In 2010, the city acquired ownership of the iconic Portland Oregon Sign, a large neon structure near the end of the Burnside Bridge.  The city then changed the lettering on the sign from “Made in Portland” or “Portland Oregon.”  Wanting something to call their own, they trademarked the sign in 2011.  Then, in a stroke of genius to try and offset the yearly cost of $28,000 to maintain the sign, the city began charging licensing fees for their “trademark,” ranging from $100 to $20,000.

In May, Jeff received a trademark violation letter from the city’s attorney along with a bill for licensing fees to the tune of $100.  But, Jeff called “bulls@#t” and filed a lawsuit.

The problem is that while Jeff was selling prints of his photos of the sign, the sign in the photographs was the OLD version of the sign…the version that existed before the city took ownership, before they changed the wording, and before they trademarked it.  So, while Jeff was selling prints of the Portland sign, the sign actually appearing in the images was not the one trademarked.  As Oregon Live reports, Jeff simply believed “the city can’t trademark a sign that it didn’t own.”  Utter brilliance.

Once the city was served their papers to appear in court, they started whistling a different tune.  A city spokesperson stated:

“The City is taking no enforcement action against Vintage Roadside. The lawsuit appears to reflect a misunderstanding of the City’s position since the City is not challenging Vintage Roadside’s right to use the (“Made In Oregon”) sign image in its art and previously offered it a free license to do so. The City’s assumption is that once this misunderstanding is cleared up, the lawsuit will be dismissed.”

According to media reports, Kunkle isn’t sure how to proceed now that the city has dropped their demand for the licensing fee and that he will need to consult his lawyer before making a statement.

What I don’t understand is why the city would do this.  I could see them (perhaps) wishing to trademark a local landmark to protect it from being copied by rival entities, but who would do that anyway?  Then, to demand licensing fees from people, including a guy selling prints on Etsy…?  And, to miss the elephant in the room and slap this guy with a trademark violation for selling images of the sign taken before they even owned, redesigned, or trademarked it is beyond me.

By contrast, the Las Vegas sign, perhaps the most iconic sign next to the Hollywood sign, has no copyright restrictions and has been used for commercial purposes since its creation in 1959.  So, what does Portland have to prove?

This is just a small taste of what photography in Europe will look like if the upcoming proposal banning Freedom of Panorama is passed by the EU parliament.  The new proposal would require that photographers and tourists receive written permission from all copyright holders whose works appear in their images (i.e. buildings, landmarks, etc.) before publishing them, using them for commercial purposes, or even sharing them on social media.  What fun…