Will public photography soon be impossible in Europe?  A new proposal being submitted in the European Union parliament may mean almost that.

“Freedom of Panorama” is a a term we don’t hear frequently, but its importance is vital to the photography community.  In short, Freedom of Panorama is a part of copyright law that gives individuals the freedom to create works of art (whether they be paintings, family snapshots, professional images, videos, etc.) in public.  The specifics vary from country to country, but, in many places around the world, this is allowed for both personal and commercial use.

However, opponents within the EU want to pass legislation removing this freedom in all European countries.  This would mean that, when taking any photograph or creating a video in public, you must obtain the permission of the copyright holder for any copyrighted work that may appear in it, including buildings, landmarks, and works of art.

How does this affect John Q. Public? 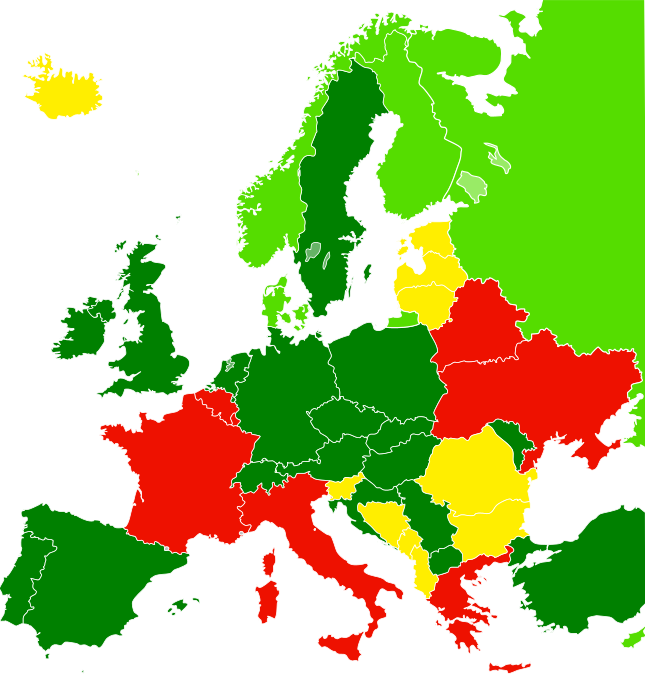 Julia Reda is a member of the EU parliament, and she is fighting strongly to get Freedom of Panorama across the entire continent.  However, the new proposal would transform all of Europe into yellow or red.

So, how does this affect you, again?  Let’s say that you took a photo of the London skyline.  Let’s say you wanted to share that image on your blog and social media.  The new proposal would require that you obtain written permission from a copyright holder for every piece of intellectual property visible in the image.  You would have to track down the designer of every landmark, the architect of every building, etc., and request their permission to publish or use your photo.

You could accidentally be in violation

“But, I’m just taking snapshots on our backpacking trip this summer.  That doesn’t count as commercial usage!”  Sure…until you share them sites like Facebook.  Part of the Facebook terms of service states that, by uploading your photos, you are giving Facebook (clearly a commercial entity) permission to use your photos commercially.  The mere act of sharing your images on Facebook would be a violation without having tracked down the rights holders and obtained permission.

As Reda details on her website, “You then have to conclude a licence agreement with the rightholder or responsible collecting society that explicitly allows the commercial use of the picture by Facebook before you can legally upload your holiday pictures to Facebook.”  …or any other social media or photo sharing website with a similar clause.  “A restriction to Freedom of Panorama to non-commercial use would therefore bring millions of Europeans into conflict with copyright law over their perfectly harmless, everyday online usage,” making them liable not only for civil judgements but criminal prosecution as well.

Reda also points out that when laws changed to extend copyright protection from 50 to 70 years after the creator’s death, it took effect retroactively.  Suddenly, many works across multiple mediums became in violation of the new terms.  So, five years ago you published a photo book of your tour through Europe?  Well, until you obtain written permission from all copyright holders of works visible in your images, your book would be in violation and would have to be pulled.  You shared images on Facebook from your trip to the London Olympics?  Gotta take ’em down.  The chaos and backlash would be staggering.

So, what can be done?

You’re full of questions, aren’t you.  Well, that’s good.  One July 9th, the proposal goes to a vote in the EU parliament.  Reda encourages those living on countries (i.e. the green ones on the graphic above) to contact their MEPs and encourage them vote against the proposal.  She advocates explaining to them that passage of such a measure would actually take away freedoms their constituents currently have and to promise revolt if they vote in favor.  (Okay, so she didn’t call for revolt…that was just me.  Bloody Americans.)

Petitions are circulating the web, and one on Change.org has already reached almost 75,000 signatures at the time of this writing.

Sometimes, voices can be heard, and change can be enacted.  Be a voice.

« Olympus Goes Head to Head vs. Sony with Olympus Air – Smartphone Camera With SLR Quality and Features
How Rosco Makes Their Famous Swatchbooks »