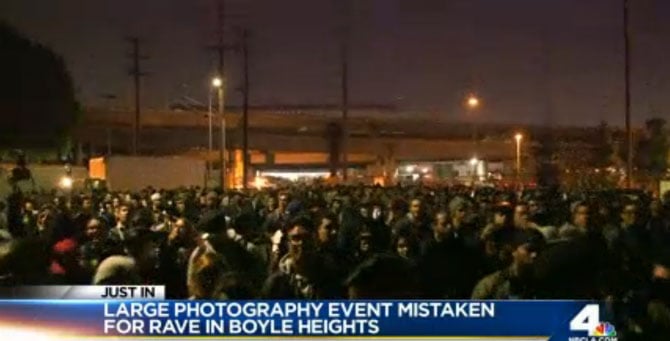 When most people think of photo walks, they probably imagine a small group of photographers casually strolling down the sidewalk snapping photos of random things along the way. Then there’s FlaskMob, a group of photographers, models, and artists who do photo walks a little bit differently. For example, the photo walk the group organized near downtown Los Angeles on Saturday, was complete with their own mobile DJ, fireworks, steel wool spinners, smoke bombs, and booze. The organizers were expecting approximately 300 participants to show up; however, as word spread via social media, that number quickly grew to about 2000.

Needless to say, the police, who were unaware the event would be taking place, showed up in full force as soon as they caught wind of it. In their initial reports, the police reported the assembly to be a rave which had grown out of control. Another report by the local CBS affiliate called the group a “huge protest”.  After speaking with some of the participants, the police eventually learned the event was actually a photo walk. Still, with no permits and large amounts of people lighting playing with fire (though, to be clear, no damage was reported), the event was destined to be shutdown.

One photographer in attendance of the event made a post on Reddit calling the event “a complete disaster” and commending the LAPD on doing “a hell of a job overreacting.” The post continued to explain that the assembly was corralled into an alley before being surrounded by officers who forced them to disperse by allowing 10 people to exit the alley at a time. No arrests were made, but, the Redditor claims at one point, an officer “pulled out a shotgun, cocked it, and pointed it at the crowd.”

As most of you know, tensions have been very high between police forces and the general public in the past year, especially in large gatherings and assemblies. Some attendees of Saturday’s photo walk are saying the police used unnecessary force and intimidation tactics in order to break up the crowd. To that end, I’m sure the police are saying the group should have notified them of the event ahead of time, acquired the appropriate permits, and not have been lighting things on fire in the street.