I saw this photo on Tal Zigdon‘s facebook page and at first I was wondering if it was an April 1st photo. The first thing I was looking for when seeing this shot was the fire squad and a bunch of support crew. Titled trash the dress, the context seemed obvious, but I wanted to know more. 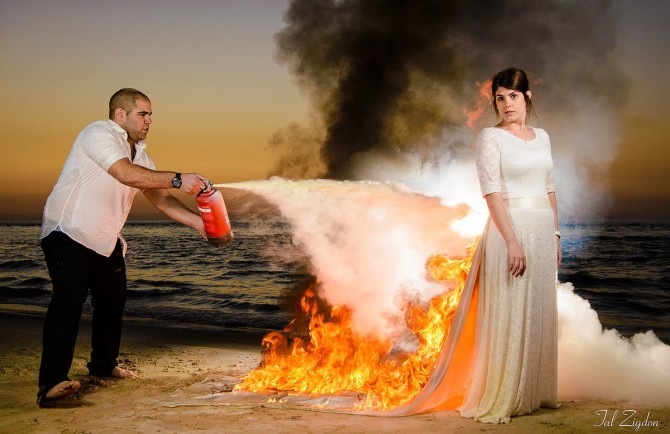 Not really understanding what I was seeing, I contacted Tal and asked him about the photo. Tal told me that he has worked on the concept for months and had many, many tests before bringing a live person to the shoot. On the shoot day there were 2 pre-tested fire extinguishers and two ready-to-jump assistants (Daniel & Shiran  Zigdon), and the location was near the sea and there was lots of sand.

Of course not every couple will be willing to assume the risk, and there were a lot of ‘dry rehearsals’ done before the first match was lit.

Still, from my point of view, the bride being an untrained stunt lady, there is so much that could have gone wrong, and even for the epic shot that this stunt produced, I still think it is not worth risking your skin or your life. As the bride / groom / photographer, how would you tackle the situation?

Please, don’t dangle your kids over a cliff for a photo!