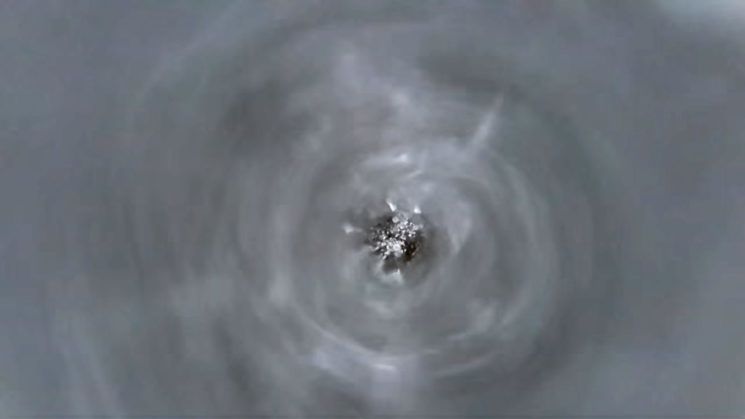 It’s like going through the Stargate, or at least down the water slides at the local pool. This very neat effect was created by YouTuber digi47. He says that he “didn’t realise it would create such a cool effect”. But a cool effect is exactly what it makes.

I wouldn’t recommend trying this with a DSLR unless you have an underwater housing. Even then, though, the lens itself might be too large to really get the full effect, and the larger sensor might not even allow you to focus so closely. But if you have something like a GoPro, or a relatively water resistant phone, then sure, why not?

I find the physics behind it also pretty interesting. We can see straight up the shaft of water to the tap because there’s an unbroken path  of water between the two. It’s like looking underwater at a swimming pool wearing goggles. Those things that look like water droplets at the top are actually air bubbles. They get sucked into the “tunnel” at the top, and then rise back off.

Do be sure that whatever camera or phone you use is actually going to survive if you give this a try yourself.

The V200MICRO has 200WH, a reversible D-TAP and a tiny flashlight

« This is the full budget and lighting breakdown on shooting an $8,000 commercial
This Fashion 101 course shows you how to shoot and break into the world of fashion photography »