We’ve seen our share of drone cameras, with cameras mounted on R/C Helicopters, R/C Quadcopters and R/C cars. But the need for a better, more capable drone drove Alper Bozkurt, an assistant professor of electrical engineering at NC State university, to develop a remote controlled Cockroach.

One of the main motivations for this development is to carry cameras into wracked sites where no man can go like earthquake sites or fallen buildings. Instead of developing a tiny robot capable of maneuvering in hard environments the NC team used a readily made creation of nature: ‘We decided to use biobotic cockroaches in place of robots, as designing robots at that scale is very challenging and cockroaches are experts at performing in such a hostile environment.‘

The mechanism works by irritating the bug’s antennas so it thinks it ran into an obstacle and tries to move around it. The device nagging the antennas is a small backpack which weighs less than a gram and contains the antenna controls and an R/C  receiver. 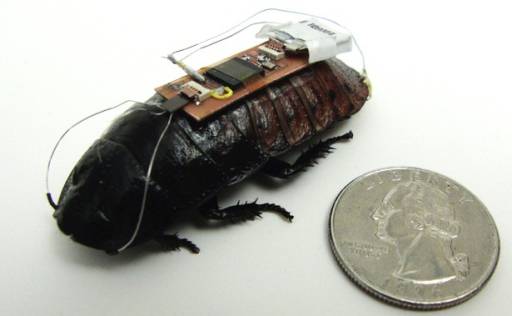 The video below shows how the roach is controlled to follow a line drawn on the floor:

While this specific prototype is still not equipped with a camera, the line to get a 5th element cockroach cam has just gotten shorter. (If you recall, a similar device was conceived in the 5th element to spy on President Lindberg).

This cockroach is actually a tiny search and rescue camera

Here are ten predictions about the future of photography