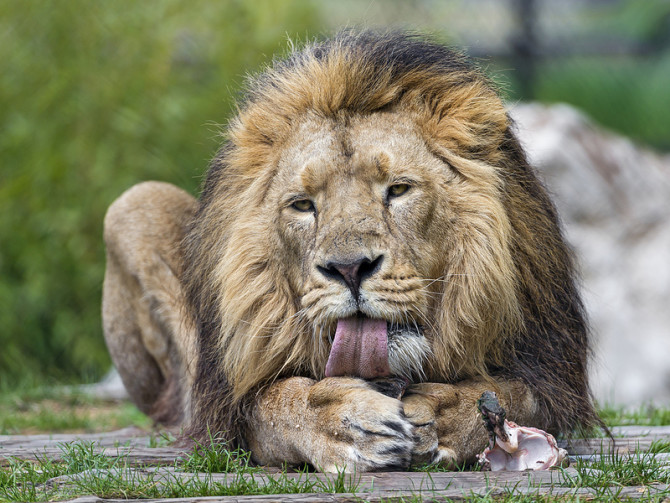 EDIT: DIYP intends no disrespect to the victim or her family and friends by publishing this post. As was stated in the article, regardless of the circumstances surrounding her death, the loss of life is indeed tragic, not only for the victim but for those close to her. The use of satire was intended to communicate, to those who typically ignore safety precautions while knowing the risks, how very real the consequences of such actions can be.

We can all agree that there are many things in life that can kill you, such as nuclear radiation, stepping into oncoming traffic, and a jealous girlfriend. Oh, and lions…especially if you’re stupid. (Or maybe just careless; we aren’t passing judgement.)

If I’m driving through a wildlife park and the rules state that my windows are to be closed and I am to have no contact with the animals, chances are I will test the boundaries and see how much I can get away with for a great picture or story to tell. That, however, backfired morbidly for an American tourist traveling through Lion Park (yes, we know the link is currently dead, although we’re not sure why) just north of Johannesburg, South Africa.

Despite the park rules stating that guests are to keep their windows rolled up and “hands and feet inside the ride at all times,” the 22-year-old tourist was riding along through the park with her window rolled down and, we assume, Lynyrd Skynyrd blasting “Sweet Home Alabama” over the radio. Witnesses state that, at the time of the attack, the victim was taking photos of a lion from one meter (a little over three feet, for us bloody Americans) away when the lion, apparently disagreeing with her choice in playlist, lunged through the open window and attacked the woman. Perhaps a bit extreme when a simple, “Please change the song,” would have sufficed, but it’s easy to play armchair expert after the fact.

According to reports, park employees were able to get the lion away from the victim, and although paramedics attempted to save her life, it was too late. Regardless of the circumstances, the loss of life is still tragic.

A few things I take away from this

First off, this is an enclosed park, which is probably why the park is able to advertise, “super close-up animal views guaranteed.” To me, that takes most of the fun out of the experience. It’s kind of like those places that guarantee you will shoot a trophy buck by paying to hunt in their enclosed killing grounds. It’s like shooting fish in a barrel rather than experiencing the thrill and allure of tracking down a truly wild animal. This was not an open safari but rather the South African equivalent of Six Flags. Kinda unsporty, if you ask me…

Secondly, this park apparently has a problem with temperamental wildlife. An Australian tourist was attacked in March when he decided to pull the same thing (although, we assume his playlist incorporated…well, whichever Australian musical artists were all the rage in the 1970s) and travel through the park with his window rolled down. Two days later, a 13-year-old boy who thought it a great idea to take a shortcut across the park on his bike (the balls!) was attacked by a cheetah. Now, how many serious incidents and deaths do you think Six Flags would have to accumulate before the place would see a decline in their legal privilege to remain open? Then again, TIA (“this is Africa), so a different set of rules obviously applies.

And, perhaps this is what Charles Darwin had in mind when formulating his theories on natural selection.

Photographers, for the love of God…

…your life, and the pressure your friends and loved ones would undoubtedly feel to conjure up something nice to say at your memorial, don’t be entirely stupid when trying to get the shot. But, should you choose to ignore my advice, be sure the images that will be recovered from your memory card and sensationally shared with the rest of the world are epic.

[via The Telegraph | Header image courtesy Tambako The Jaguar]

« Disappointing, But Expected: $200 Sony a7R Orders Will Not Be Fulfilled
Would You Ask An Assassin To Work For Free? »