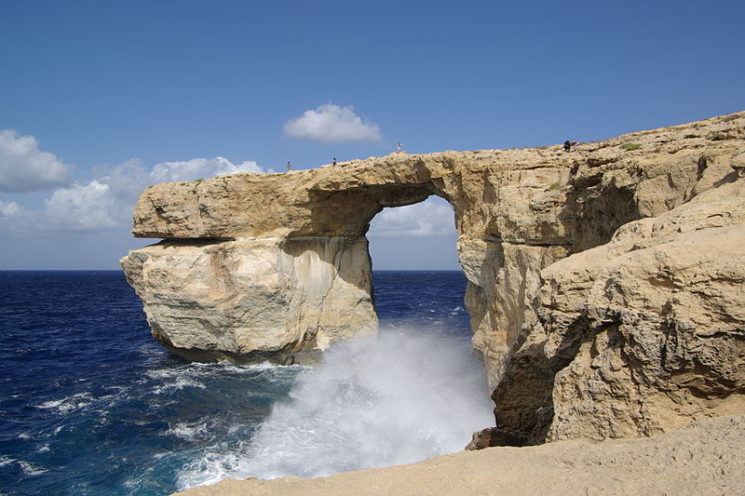 World-famous Azure Window in Malta is no more. After heavy storms, the limestone arch collapsed into the sea and vanished completely. Photographers who took their photos are glad they did it while it was still there, and the rest of us are regretting not having a chance to take our own. One of the most iconic landmarks in Europe has been completely ruined, as if it never existed.

Rough storms were raging under the arch, and it collapsed entirely. What I find especially sad is that the entirety of the arch disappeared. Not just its thin top, but the both sides as well. It was a popular tourist site, and many people climbed on it over the years. However, we can’t blame (only) tourists for the cave-in.

Considering the material and the rough seas, the erosion was inevitable. A geological study from 2013 confirmed this, but it suggested there was no danger of the structure collapsing any time soon. Last year, walking across the bridge even got proclaimed as an offense, punishable by a fine of nearly $1600. Unfortunately, it seems the final day of the arch has arrived sooner than anyone had thought.

Azure Window (or It-Tieqa tad-Dwejra) was one of the most recognizable locations in Europe. It was on the Maltese island of Gozo, famous for its 92 ft arch. But, in recent years, it’s probably gained extra popularity thanks to the HBO’s series Game of Thrones. Remember Dothraki wedding from the first season? It was filmed there.

Other than being featured in Game of Thrones, Azure Window was a target of all photographers who visited Malta, both professionals and amateurs. It was featured on many postcards and promotional posters of the country. In a word, it was an icon of Malta’s natural beauty.

Bye Bye Tieqa. The best shot I ever took of the iconic landscape. Always wanted to give it another shot :( #Dwejra #AzureWindow #Malta pic.twitter.com/UvOFGpPm5m

Photographers and visitors all over the world are paying a tribute to the iconic landmark, posting photos they made when they paid a visit. Those who never visited the Azure Window, lament over a missed opportunity. I fall under the second group, as I never had the chance of visiting this place. To make things worse, I’ve been planning a trip to Malta for a while and I will probably go there this year. A few months too late when it comes to photographing one of the country’s most prominent landmarks.

Sad news as the #azurewindow in #Gozo collapses last night after the heavy storms >> https://t.co/TxIDX1cyEL pic.twitter.com/Qo76d51Pgb

The collapse was inevitable at some point in time, but it was pretty unexpected and quick. Malta has lost its most famous landmark, and if you were lucky to visit it before this event, feel free to share your images with us.

Watch: Shelves full of camera gear collapse like a house of cards

Here are plenty of fantastic tips from 29 famous photographers