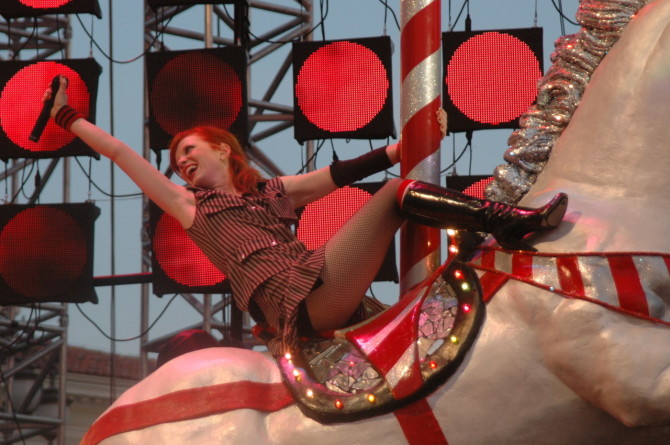 Photographers and musicians have at least one thing in common, for both types of artists, it is becoming increasingly difficult to get paid for the work they create regardless of how “good” it is. Given that fact, it’s always a little disappointing to see things play out the way they have between rock band, Garbage, and pro photographer, Pat Pope.

Pope has just posted an open letter to the band, kindly declining Garbage’s request to use some of Pope’s photos in an upcoming book without paying for them. He explains he was contacted by the group’s management company, Big Picture Music Co., via email that was full of praise and adoration of the photographer’s past work with the band. Pope says Big Picture described the book as “financially limited” (read: “We’re not going to pay you”), but Pope would get “proper credit” if he allowed his images to be used in the book.

This inspired two very appropriate questions in the photographer. From one artist to another, Pope asked the band:

Q1: I’m a firm believer that musicians and artists deserve to be paid for their work….When you think about artists being paid, does that include photographers? Do you think “content providers”, whatever the hell that means, deserve to be paid for their work, or is that a special category for musicians? If I want to release a music album, can I use your music in it if I give you a “proper credit”?

Q2: If you’re putting together a book, presumably someone at your management company or somebody in the band has written a budget. And if there’s a budget, somewhere in that budget, against the line for “use of photos” somebody has written “no need to pay, we’ll just give them a proper credit and get them for free”…But that same person has written zero for photos, because that content, in their opinion, they can get for free. Who is that person? As a band are you happy to be employing someone who thinks like that? Because it seems to me that the person who writes down “zero for photos” today is the same person who will write down “zero for music” tomorrow because they don’t respect the “content providers”.

The closing paragraphs in Pope’s eloquently written open letter summarizes it perfectly: “…it worries me more that musicians and others are saying one thing publicly about the needs for artists to be paid for their work whilst privately people working for them are doing exactly the opposite.”

He also makes note that he is not placing blame on the band themselves, as he is not sure of the depth of their involvement with the process, but wants them to be aware of what is happening. “So, very respectfully, …….no,” Pope added. “No, you don’t have my permission to use my work for free. I’m proud of my work and I think it has a value. If you don’t think it has any value, don’t use it. I’m saying no to a budget that says you can take my work for free and make money out of it. Thanks, and still a fan of the band.”

In favor of the band, Pope said he recognized that even receiving an email request to use his photos was an improvement over past management of the band, citing they had previously used one of his photographs without permission in the past. After the photographer went to the music store and purchased their CD, Absolute Garbage, Pope discovered one of his photos had been used in the album artwork.

To read the full letter, and learn more about the photographer, you can visit his website at www.PatPope.com.

[ via Louder Than War | Lead Image by Daniele Dalledonne ]