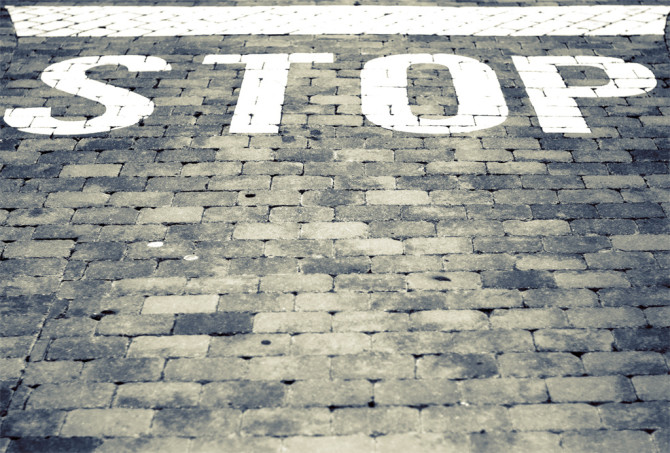 Please allow me to introduce myself: I’m Pat Pope and I’m addicted to reading negative comments and abuse hurled at me on the internet. For the sake of my own sanity, this is me going cold turkey.

Last week I made the mistake of writing one of those Open Letters you hear about. I wrote it in response to a request from Garbage’s management company that they’d like my permission to use a photo that I took and I own in a book they intend to publish and sell for money. But they’d like to not pay me. Since it went out on the internet it’s caused a huge debate, and within that debate I’ve been called a “whiney weener”, a “shitty douchebag”, and an “egomaniac”, and I’ve been encouraged to “watch your back” because “we will find you”. I found it quite hard to read those comments, not least because I’m English and I’m not sure what two of them actually mean.  For the sake of balance, I’ve also been described as an “internet warrior” and someone who is “standing up for the little guy”, so it wasn’t all terrifying, some of it was just a bit mad. But I need to get back to my life now, so I’m turning it all off. This is my final and only comment on the whole debacle, and I just want to use it to clear up some misconceptions.

Why did I write an Open Letter?

There’s been a lot of criticism of me making this public, with some saying I should just have quietly refused permission. There’s three reasons why I didn’t do that.

1. People think this is a one off request for special dispensation from one particular group of artists just trying to make one specific project happen. It isn’t. I receive hundreds of these requests a year, as does every other photographer I know. This is the new normal – writing down a budget in which you’ll get the photographic content for free by making the photographer give it to you. How will you make them give it to you? By quietly abusing the power relationship.

2. The Power Relationship. Garbage stated in their response that they “humbly requested” the use of my work for an “artistic collaboration”. To be clear, Garbage didn’t contact me at all. Garbage paid someone at their management company to send me a pro-forma request for free usage of my work.  When you receive a request like that, the power relationship is that a gigantic branded entity with huge reach and backing is asking a lone freelancer to accept that the value of their work is zero. Your two choices are to give them the permission, valuing your work at zero, or to refuse permission, in which case they will quietly remove you from the list of freelancers they work with so you won’t get any future work. This has happened to me time and again when refusing or granting permission. If Garbage don’t understand that this is the nature of these requests then they need to spend less time reading Amanda Palmer and slightly more time investigating how power and control work.

3. When writing the original Open Letter I honestly believed that Garbage probably didn’t know that this was happening in their name. I’ve met and socialised with the members of the band on several occasions. I remain a fan, not just of the band but of the artists as people. When I wrote the letter I genuinely expected that this would be an opportunity for them to step forward and stand up for artists.  I know hundreds of people working in the creative industries would have stood alongside them had they chosen to do that. To be honest, I sort of regret choosing them for the Open Letter format because of their response. It wasn’t my intention to embarrass them or accuse them of anything; they’re great people, we just disagree on this which I’m disappointed and surprised by.

Why does any of this matter?

We are living in an age where content service providers and the public have unwittingly collaborated to reduce the value of creative content to zero. Companies are happy to sell you an expensive shiny device that sits in your pocket giving you access to limitless creative content. They conspire with other companies to create services that will deliver that content to you for free. The public unwittingly colluding with those companies to ensure the service providers and the device makers are getting paid while the artists are not. Take your device out of your pocket and go on to Google, Facebook, YouTube or Spotify right now. You can see dozens of photos I own accompanying thousands of pieces of music played by your favourite artists, and none of us are getting paid. The creative community has become used to these companies’ complete disregard for the content creators. I wrote the Open Letter to Garbage because the very least we can do, as an artistic community, is to refuse to adopt their methods to undervalue our own work, artist to artist.

What can we do?

I’m no “internet warrior”, and I’m certainly not applying for the job as figurehead for any campaign demanding this or that. But I do know that all of us in the creative community have to Stop Working For Free. Musicians, photographers, videomakers, illustrators, animators, writers, journalists, filmmakers, actors, dancers and composers; these people have to be able to make a living doing what they do, and all of us have to support each other to Stop Working For Free. There’s a Facebook group for that run by people who know more about it than me. Join it. The next request you receive for some free content, write your own Open Letter. Let’s get this practice out in the open. When the budget for your next project gets put in front of you, ask where the money is for the artists. All the artists.

I’m Pat Pope, and I’m a professional photographer. In my career I’ve been fortunate to work with Bowie, Lou Reed, Radiohead, Oasis and Garbage. I’m incredibly thankful for the opportunity to use my skills, training and the time and money I have invested in something I love doing around people I respect, but this is my career.

Like Garbage, I sometime choose to collaborate with artists who don’t have a budget to work with me; in the last two years those bands have included Joeyfat, Ugly Love, Slaves, House On Fire, and Tom Williams. You should check them out.

Like Garbage, I sometimes choose to donate my time to charities; my two personal choices are Rhythmix (their Wishing Well project puts music into hospitals for sick children, it’s amazing) and Taylor Made Dreams (who enable life limited children to achieve their dreams, again, incredible). You should definitely donate to them.

Unlike Garbage, I think the work of artists, including my own work, has a value that is at least equal to everything else being done in a commercial project, and I’m not prepared to reduce the value of it to zero by giving it away.

Pat Pope is a portrait photographer with over 20 years experience. He has worked for a variety of press, record companies, publicity and private clients. He has also travelled extensively including stints in former war zones. A portrait of the singer Dido hangs in the National Portrait Gallery. You can visit his website or Facebook page for more of his work.

This article was originally posted here and shared with permission.

Behind The Scenes of Covering The Pope’s Visit To The US
« More Drones: DJI Announces The Phantom 3 Drone
Canon Is All Over 4K; Announces Two Camcorders, a Monitor and a Proprietary Video Format »