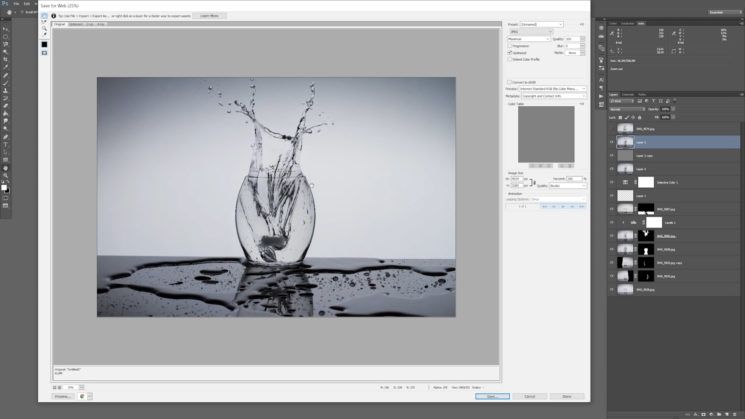 Photographing splashing liquids is great fun. There’s all kinds of things you can do with it. Moving the lighting around, using coloured gels, or swapping over to a completely different liquid altogether. Often, though, the simplest place to start is with one of the most abundant substances on the planet, and that’s water.

That’s the liquid which Russia based commercial photographer Andrew Mikhaylov uses in this video. Andrew goes through the whole process of shooting and post processing water splashes. I will warn you, you might want to have a bunch of towels handy if you’re going to try this yourself. As you would expect, things get a little wet and messy.

The first step to shooting it is setting up the stage and lights. And you don’t need a lot of equipment for this. Andrew used a Canon EOS  7D, one lens, and a single 580EXII speedlight. The speedlight placed around 2ft (60cm) behind the glass, pointed at the wall. The zooming the flash head to 50mm to gives a natural vignette to the background. Yes, a vignette can be added in post, but it’s a lot less hassle to get it in-camera.

As Andrew planned to composite multiple shots together in post to get the final image, keeping things static is key. If you’re dropping ice cubes into a glass of water, you’re always going to get a little movement at some point. So, Andrew uses double sided tape to stick the glass firmly to surface.

With the position of the glass set, the next part to getting consistency is manual focus. This way, each shot has the same depth of field. To set initial focus, placing something inside the glass that allows you to easily see when you’ve got it right. In this case, a pencil. 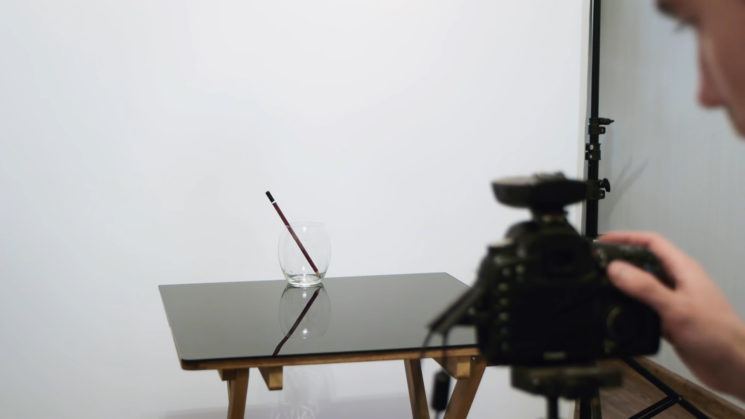 Then it’s just a case of pouring water into the glass, getting some ice cubes ready, and shooting. One of the key things Andrew notes, and the reason he used a speedlight, is that you want the power low. With speedlights, the lower the power setting, the faster the flash duration (the time the light is on). Faster flash durations mean water is frozen perfectly in the air, and you eliminate motion blur.

After you’ve shot all your images, the next step is sorting through them. Shot from the same position, settings and flash power, allows consistency throughout. Process one, and batch it to the rest. Then just pick the images with the most appealing elements for you. 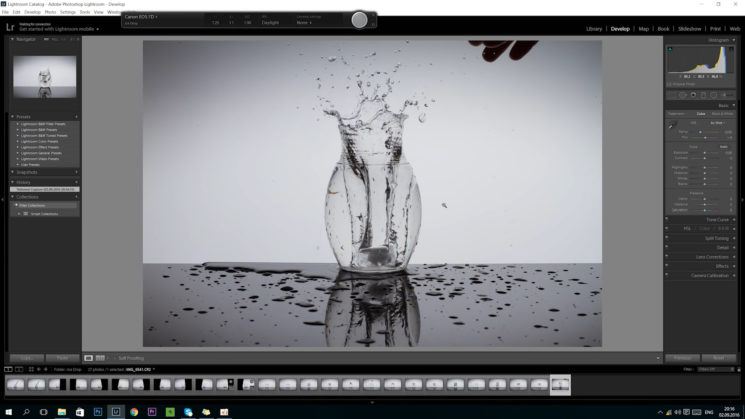 With the images chosen, the next step is to bring them into Photoshop, each on a separate layer. Andrew chose one image to be his “clean plate”. A base background layer onto which everything else will be added.

Each of the layers above are checked for alignment. Even with everything nailed down, things can still move slightly between shots. Then, with everything in place, it’s time to start masking in elements from each of the different layers.

And don’t forget to mask out those reflections when you add the final tabletop shot, too! 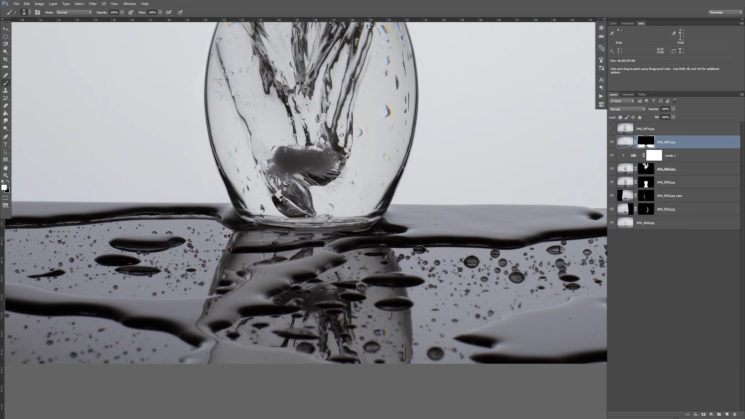 The cleanup and composite is the majority of the work on shoots like this. But in the end, it pays off. It’d be great to get it all in-camera, but luck is a major component. There’s a lot of trial and error. Water just doesn’t always work the way we want it to.

Compositing allows for a lot more control over our final image with projects like this. But, there’s nothing to stop you shooting over and over. Working towards that perfect shot in-camera.

You can see more of Andrew’s liquid photography work on his profile over at Photigy.

Have you photographed water or other liquid splashes? Do you try to get perfection in-camera? Or do you composite? What other tips can you offer? Let us know in the comments.

Amazing Flowers Made With Water Splashes

This is why you should post-process your photography