In a video published to the Pentax Photography YouTube channel, Ricoh has revealed some more details on its upcoming new flagship APS-C DSLR. It’s the second part of a series by Pentax (Part 1 is lower down in this post) to “reinforce its commitment to DSLR photography“.

It might seem a little mad to cling onto DSLRs when the rest of the world is going mirrorless, but it seems that Pentax might be looking to capture the segment of the market that just doesn’t want to ditch the mirror.

In the video, which is 24-minutes long and in Japanese (although it has embedded English subtitles), professional photographer Keita Sasaki talks with the Ricoh Product Planning Department’s Shigeru Wakashiro to discuss the new camera and find out a little more about it. There are many things that they don’t seem to be able to tell us about the system, but there are some things they do show. Things like the large LCD that sits on top of the camera to provide as much detail back to the photographer as possible. 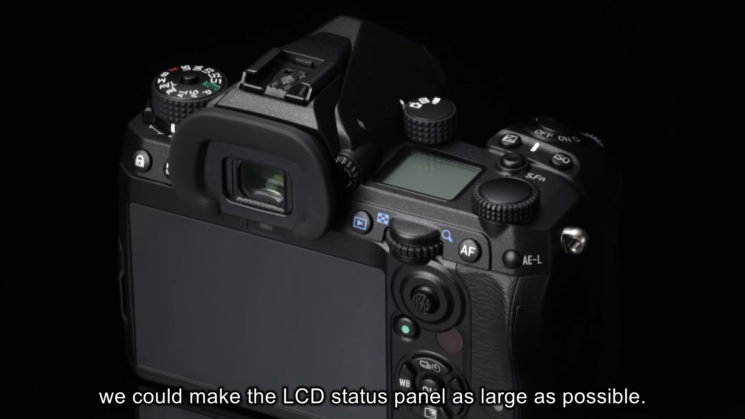 But the large top LCD isn’t the only feature they discuss. Other topics include…

Pentax’s goal with the new APS-C DSLR seems to be not only to show how dedicated they are to DSLRs rather than mirrorless but to also disprove the myth that APS-C DSLRs aren’t as good as full-frame DSLRs.

Whatever’s coming, it better really hit the spot, because Pentax has been building this thing up for quite a long time now. And with the big deal they’re making about their commitment to DSLRs, they’re going to really need to impress to be able to compete against the latest round of mirrorless cameras being released.

With the Canon EOS R5 & EOS R6 and the Nikon Z5, its two main competitors in the DSLR space are already hitting their second-generation mirrorless bodies. And with Sony finally about to announce the A7S III, Pentax is going to have to do a lot to be able to survive in what has become a very competitive market. They may ultimately find themselves alone in the world of DSLRs very soon – of course, that may be their plan.

If you didn’t see Part 1 of the Pentax Vision series, here it is.

I will say this for them, I do love their passion.

At the moment, we still haven’t been told the name of the new camera, nor when we can expect a more complete official announcement.