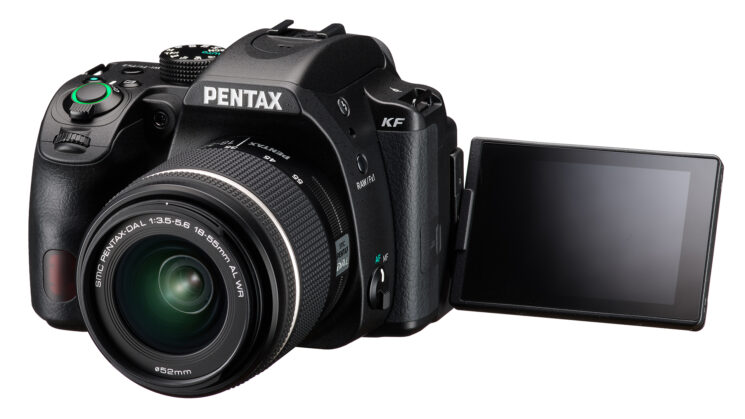 Pentax has now officially announced the new Pentax KF APS-C DSLR. I say “new”, but it’s not really that much different to the K-70. It’s had a few minor tweaks, but one major update is that it now has a proper flippy out LCD with a slightly higher resolution than its predecessor. It has some new custom image modes and features the special edition Kyushu and Katen Custom Image modes (with supported lenses).

Other than that, though, not much has really changed. It’s almost identical to the K-70 in its exterior other than the LCD, assuming you don’t go for one of the fancy limited edition Crystal Blue or White colour options, and you’d be hard-pushed to tell the difference between them if not for the fact it has “KF” written on it. It’s more of an incremental replacement rather than an upgrade.

The Pentax KF features a 24-megapixel sensor that lacks an anti-aliasing filter with 4.5 stops of in-body image stabilisation. It has an ISO range of 100-102,400 with full, half or third-stop incremental adjustments. It’s dustproof and weather-resistant with over 100 seals throughout the body for shooting outdoors even in demanding conditions, and Ricoh says it operates just fine down to a temperature of -10°C.

You’ve got 14 custom image modes, including Satobi, which simulates the cyan-tinged blues, subdued yellows and faded reds of the 1960s and 70s. You also get Bleach Bypass to create the high-contrast look of movie film, Cross Processing for those zany wacky colours. It also has the special-edition Kyushu and Katen modes, although these only work with specific Pentax lenses – which still seems very odd to me.

The pretty colours of the limited edition models are nice, but there’s really nothing here to make existing Pentax shooters go “WOW!”. And that’s what Pentax needs right now if they want to even think about growing their market share. Existing Pentax owners are their biggest sales force right now to convince other people to jump on the DSLR bandwagon. There are too many higher-end used DSLRs from other manufacturers on the market now without even thinking about mirrorless.

It’s got to be difficult, though, being the only camera manufacturer to keep that tight death grip on DSLRs instead of jumping on the mirrorless bandwagon. And while the K-70 and the KF are only entry-level bodies, the new announcement kind of shows that DSLRs really have started to hit their limits. When every manufacturer was still making DSLRs, it made sense to hold features back (especially in the lower-level bodies) to keep the status quo so they could all keep making money. Now, when Pentax has absolutely zero competition in the DSLR space and mirrorless market share is growing daily, there’s really nothing stopping them from piling in new features into DSLRs… Unless there aren’t any more to add. 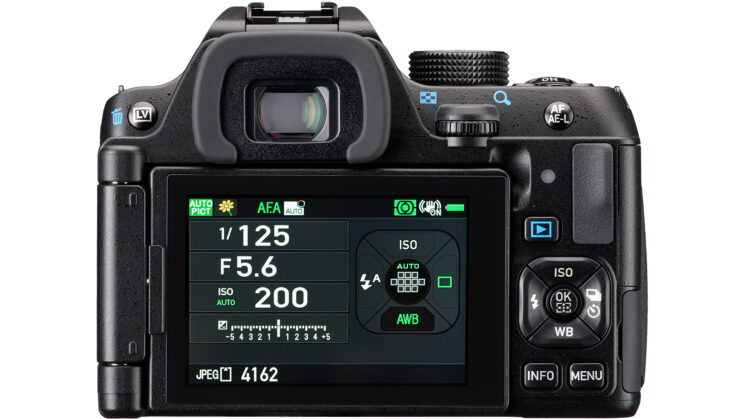 I mean, as entry-level DSLRs go, the KF already offers some great features (because the K-70 did). It’s weather sealed and it even retains the pentaprism optical viewfinder with 100% coverage, a feature not typically found in entry-level DSLRs that generally go with the cheaper pentamirror option. But DSLRs have already hit their peak, which is why everybody except Pentax has jumped on mirrorless. Sure, there are potentially some advantages of DSLRs over mirrorless but mirrorless has a lot more over DSLRs.

There are still some niche and quirky features Pentax could potentially add that some users will definitely find advantageous, but the problem with DSLRs now is that even if Pentax wanted to implement them, the market is so small, I expect it would be difficult to justify the R&D costs. The KF seems to come across more like a money-saving exercise to adapt to current part availability in a global silicon shortage while keeping new manufacturing costs as low as possible than to offer any kind of real innovation.

But if this camera is your thing, the Pentax KF will be available to pre-order soon for $849.94 in a body-only kit or for $949.95 with the Pentax DA L 18-55mm f/3.5-5.6 AL WR lens. It’s scheduled to start shipping in late November. For now, you can find out more about the Pentax KF and see the complete specs on the Pentax website.

« The ISS is getting an ultra-high-res immersive camera, the fanciest one yet
This free web tool lets you explore bias in AI-generated images »