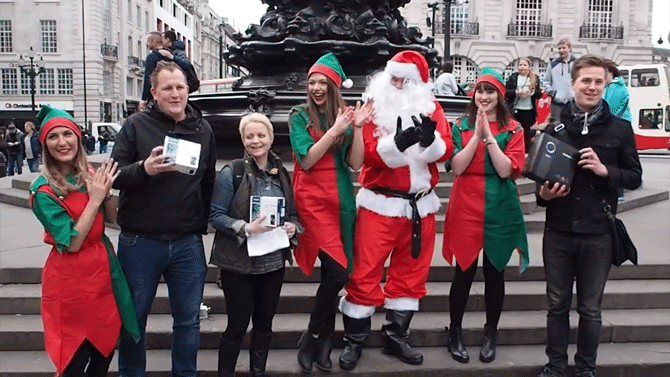 I got to hand it to Olympus on this one, this was a pretty good April Fools Day joke, even if they weren’t actually joking. Facebook fans of Olympus UK saw several posts made by the camera maker on April 1st, announcing they would be giving away three free cameras . All you had to do was show up to Picadilly Circus in London and look for Santa Claus and his elves. If you were one of the first three people to show up, sit on Santa’s knee and shout, “OM-D it’s Christmas!”, you would walk away with a free camera.

The first of the series of Facebook calls to action posted by Olympus just shared some simple (albeit silly instructions that had most people questioning it’s truthfulness.

WIN an EM-5 Mark II!! All you have to do is repost this and head to Piccadilly Circus in London for 12pmwhere a man…

About 3 hours later, they followed up with this teaser…

Do you still not believe us? Santa Claus is coming to town!

Of course, more skepticism kicked in, but some people who lived close by were willing to take the “risk” of being duped…

For everyone who thought this was an elaborate April Fool’s day prank, the jokes on them. Santa and his helpers showed up at noon with a bag of gifts, which included an EM-5 Mark II and two Olympus Stylus TG-3 cameras. The first person to show up won the EM-5 Mark II, the second two each took home a tough camera, and the following 17 people also received gifts.

So hands up who thought this was an April Fools’ day joke?

« The Secret Life of a Barcelona Bench
Yet To Be Announced Rokinon 100mm Macro f/2.8 Appeared on B&H »