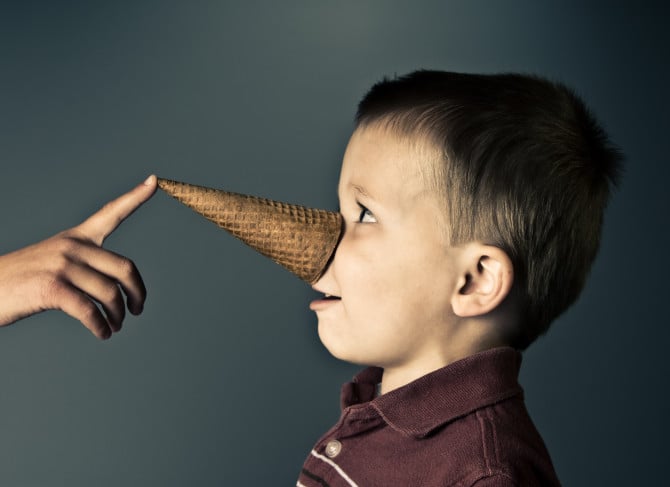 The following guest is written by Matt Haines (site, blog, Flickr). After surfing his awesome Flickr stream, I asked him if he’d like to share his mojo with DIYP readers. I should have known better. Now I am trying to find a new lighting trick to make my face look less red.

I’d like to thank Udi for inviting me to do a guest blog posting (my first!). Initially when he asked me to write about V-cards, I thought…huh? V-cards? Just a couple of foam panels taped together, what’s the big deal?

But Udi is wise. Oh he’s a wise one alright. The more I thought about it, the more I realized there’s plenty to say about such a simple—and cheap—light modifier. They’re so simple, the DIY construction part is hardly worth mentioning. Although I’ll mention it anyway. But it’s not how you build your V-card, it’s what you do with it. And you can do a lot!

So first, what’s a V-card? A V-card consists of two sturdy panels, covered with a reflective surface, attached together at an edge by some sort of hinge. They can be folded at various angles to form a V, and thus stand up on their own. Imagine a book on its edge, the covers opened slightly so that it stands upright. That’s a V-card. Or you could just scroll down and ogle them for yourself.

Now bounce a light off the inside of the V. There’s your light modifier! But of course that’s just the beginning.

My V-cards are made from foam insulation panels I bought at Lowe’s (a local giant hardware store, like Home Depot for those not familiar with the store). The panels are 4 ft x 8 ft, and come in various thicknesses. I use the 1.5” thickness, because it’s darn sturdy, and each panel cost me $15. Think foamcore, but on a larger and cheaper-per-inch scale.

One side of the panel has printing on it, but the other side is bright white and super reflective. It’s so efficient in fact, it’s better at bouncing light than my silver umbrellas! I’ve checked with a flash meter, that’s how I know.

The tape holding it all together doesn’t need to be fancy, but some sort of wide cloth tape would work nicely. It has to be durable enough to withstand repeated openings and closings. I’ve got some silvery tape, 3” wide that works well.

I simply cut the panel down the middle lengthwise, so that I have two 8’ x 2’ panels. I use a utility knife and a metal yardstick to get the cut correct. I then hinge the uncut sides, because they’re perfectly straight and will line up better. The tape goes on the white reflective side, allowing you to close the white sides together.

I also put tape around all the edges, to keep loose styrofoam from coming off. And I put some extra bits at the corners, since those areas are going to take a lot of abuse. But let’s face it…it’s $15. If the V-card lasts 10 shoots, I’m happy. And I still have my first V-card, which I built about three years ago.

I’ve got a couple of different sizes of V-cards, for different applications. I use a 4 ft high version for some things, and an 8 ft high V-card for others. Basically, an 8’x2’ V-card (remember, two panels hinged at the middle and folded up) just barely fits in my hatchback, so I don’t bring it anywhere unless I’m doing full body shots. The 4 ft high one is more portable, and works nicely for many applications. 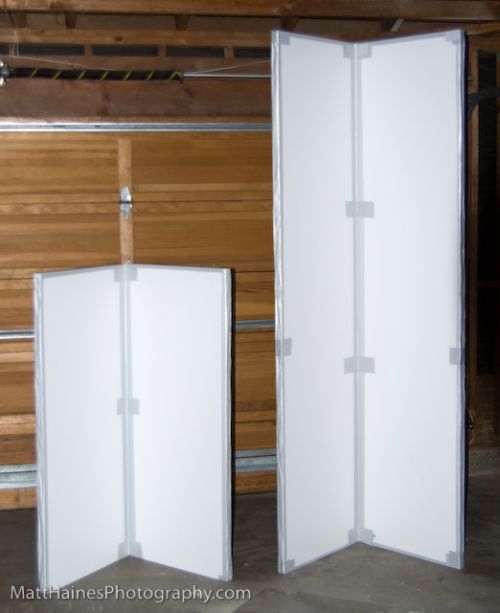 One would think I’d bother to properly light the V-cards above, but no, I’m too lazy and just used the onboard flash. Shame! Bad photographer!

Oddly enough, I first started using these in outdoor shooting situations! I do a lot of family portraits, often on the beach. I wanted a big light source that was sturdy and wouldn’t collapse in the wind. So I built a 4 ft high V-card for this purpose. I would spread the V out between two legs of a heavy tripod, tape it to the legs for added stay-putted-ness, sandbag the base of the V-card so it didn’t fly away (we’re talking 20-30 mile winds here sometimes!), and then fire a couple of Nikon SB-28s in the front of it.

Below is an image I took a few years ago, with a V-card as the light source to camera left. The sand in front of the V-card has been burned down in post, as it was very bright. 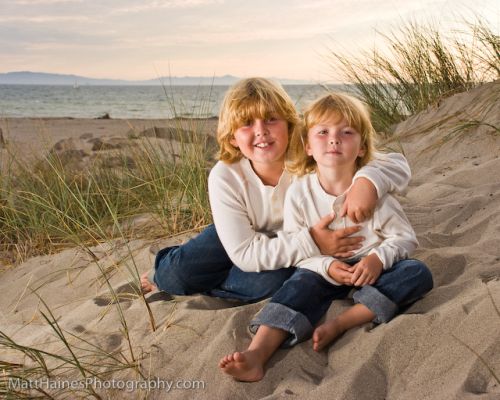 Admittedly this use of a V-card is a little insane, looking back. That was a whole lot of stuff I had to bring to a beach shoot, but I was tired of losing umbrellas when the light stand fell over, or the umbrella simply folded up on itself. I don’t use V-cards on location now though. If it’s too windy, I’ll just use hard light in a more subtle way.

Fast-forward to the present day, and I’m doing many more fashion and commercial shoots in studio situations (usually a borrowed/rented studio, or warehouse space). This is where the V-card’s usefulness becomes apparent.

So, what are V-cards good for?

They are an infinitely adjustable large light source. Open the V-card wide, and it’s a very soft, rectangular light source. Move the strobe further away from the card, and it’s softer. Move it closer, and it’s harder. Just like choking up on an umbrella!

The lead shot of my three year old son (with my six year old son holding the ice cream cone), was shot using a V-card opened wide, camera left. I also had a 2×2 ft foamcore card to camera right, spray painted gold, which I bounced a speedlight off. This was used for fill, which probably isn’t apparent after the post-processing.

Close the V-card as tight as you can. You now have a strip light! A wide, soft source in the vertical dimension, and a small, hard source in the horizontal direction. Using a strip light like this is great when you want to light the model from head to toe in an even manner, but don’t want spill going elsewhere on the set. You can use it as an edge light, or as the key light.

And you can place the strobe at different heights to get different characteristics as well. When lighting people, I usually want the face properly exposed, and want some falloff going down the body. To achieve that, I put the strobe up high (if using a studio strobe, I use a standard reflector on it), and angle it down so that it points about 2/3 of the way down the card. This gives a very good, even coverage of the V-card, with just a little falloff toward the bottom. If I want more falloff, I just angle the light higher, but still below horizontal. If I want to keep spill off the floor, I just flag the bottom of the V-card by leaning a black foamcore panel up against it.

Below you can see my son holding a speedlight over the top of the V-card, pointed downward to light the whole thing. The speedlight could have been aimed a little further down, for more even coverage…but hey, he’s only six! 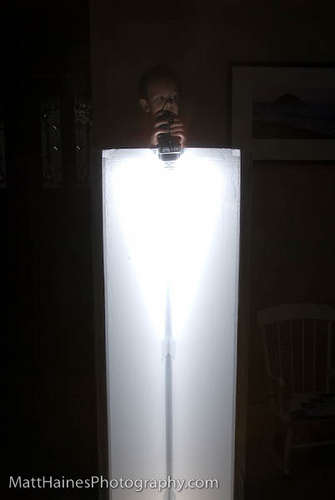 Short V-cards can be set on a table or some other surface, allowing you to light the face but with more falloff toward the ground…much like flagging the bottom of a larger V-card. So you don’t have to use an eight-foot V-card all the time.

For the image below, I used two V-cards. One is camera left, and is 8 feet high. I have an Alien Bees AB800 up high, higher than the model’s head. It’s pointing downward, and gives nice even coverage. The V-card is open wide though, for maximum softness. I also flagged the bottom of the V-card with some black foamcore, to keep the spill off the floor. And another flag to take some of the spill off the backdrop.

The other V-card was four feet high, camera right, with a warm gel of some sort over an SB-28 speedlight. This V-card was closed down tight for a strip light effect. And to complete the lighting, I had another speedlight in a cardboard snoot, camera left behind the model, as a hair light. 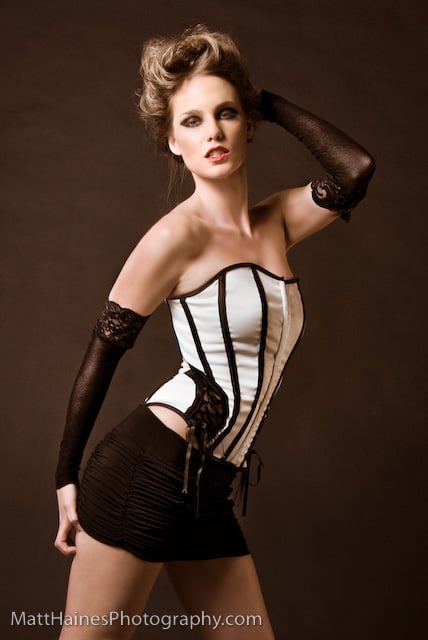 When to choose a V-Card?

Generally I choose a V-card over other light modifiers when I want to light something that stands upright, like a person for instance. Especially when I need to light the whole person, such as a fashion shot where the clothes are vitally important. They allow me to control the softness of the light independently in two dimensions, and they’re good at controlling spill on unwanted areas of the set or studio.

They are NOT however the best choice when you want to suspend your light source. You can’t shoot under them! A softbox or umbrella can be positioned above the frame, but a V-card can’t. If I’m doing butterfly or loop lighting where the light source needs to be over the subject and out of frame, the V-card is useless. It’s best to use a softbox, umbrella or beauty dish in that case. And V-cards are also less portable.

One thing I have yet to try is suspending a V-card horizontally over a model’s head. I think this could make an interesting horizontal striplight, and be useful for beauty shots. Soft light in the horizontal direction, but hard light in the vertical dimension for a distinct nose shadow. And the strobe could be positioned to one side, for a slight left/right falloff. Getting the V-card suspended horizontally would take a little effort, and would use up three light stands (or one backdrop stand, or a single stand with sturdy boom…). If anyone tests this, let me know.

Please stop by and say hi! I’ve got two fashion shoots in the next few days, and both will likely use V-cards. Thanks for reading, and thanks again Udi!

Getting a Handle on Your Compact Flash Cards