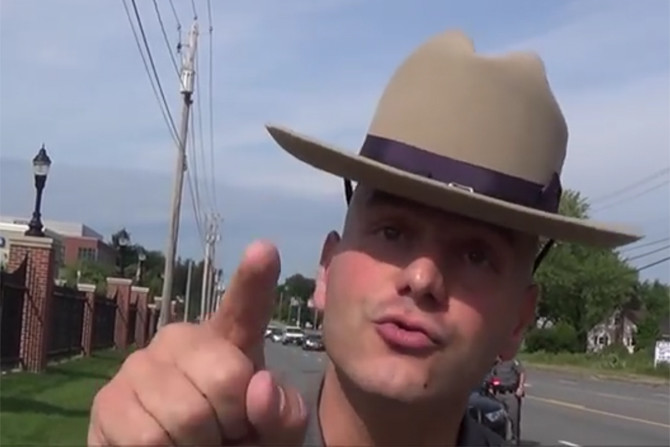 It’s no secret that photographers are often given a hard time by law enforcement officers, especially near sensitive buildings.

Be it due to abuse of power or ignorance of the law, the presence of a photographer near a security-related building is bound to attract the attention of the local authorities, and aerial photography using drones is no exception as can be seen in the video below.

While the drone operator seems to have been out hoping that police would infringe his constitutional rights, the trooper that stopped him seemed to have a lacking understanding of the law.

The dispute between the two came to an end when the sergeant in charge called off his officer and apologized to the drone operator, but it paints a worrying picture.

Do civil right advocates have to ruffle feathers to hold their ground, and when will law enforcement agencies finally get their act together?

The video begins with the state trooper demanding the drone operator produces a form of identification, obviously unaware (or uncaring) that that the civilian is under no legal obligation to do so.

The trooper dismissed the photographer’s claims that he is not required to present an ID if he did not break a law or was about to break one. He also went as far as to say that he doesn’t care if the Supreme Court ruled that filming in public if completely legal or that the local Public Information Officer has already dealt with a similar case and said flying the drone is ok.

The drone operator refused to provide any personal information or answer questions as to the purpose of his actions, and the two continued to argue back and forth until the trooper’s sergeant showed up.

The sergeant immediately called off his trooper and told him that there’s no problem with civilians flying drones over the police station or recording it. He also apologized for the inconvenience, stating that it’s an area they’re not used to dealing with.

Most responses to the video seem to either support the drone operator for standing up for his civil rights and bash the police for being unaware of the law, or call the civilian an asshole and praise the police for trying to keep the public safe.

If I had to choose I’d say I support the civilian, who goes by the name ‘capitaldistrictcopblock’. Sure, he wasn’t making life easier for himself or for the police, but that doesn’t mean he was doing anything he wasn’t allowed to. In his defense, though, his YouTube about page explains his agenda:

“After having my rights violated and Police lie to get their ticket quota, I finally had enough. Now every chance I get I will record Police to make sure they do not abuse their power on me or anyone I come across.

Cop Block is committed to highlighting the double standard often granted to those in uniforms and badges. We do this by raising awareness and providing support to victims of police abuse and other related institutional injustice. By documenting police actions whether they are illegal, immoral, or just a waste of time and resources, then agitating against the individuals responsible (ideally while recording and then later sharing), we can work together towards transparency and a real impact on issues of police accountability.”

Schmuck or not, he seems to have been fully within his rights. I also appreciate a person who is willing to stand up for his rights, even if it’s for no other reason than to defend them.

Also, the trooper than stopped him attracts little sympathy.

On the other hand, advocating for the police I’d point out that the sergeant came to the scene as soon as he saw what was going on and didn’t hesitate to tell his trooper to stand down in front of the civilian. He immediately apologized and admitted that the police aren’t 100% ok when it comes to drone activities.

Rather than take sides, however, I’d like to suggest that both parties take a long look in the mirror.

As right as he was, what exactly did the drone operator achieve, other than a small and momentary victory over one officer? Judging by his past experiences, this will not be his last encounter with ignorant officers.

Rather than stand behind your rights and ruffle feathers, why not come prepared with a pamphlet or whatnot explaining what you’re doing, why you’re doing it and why it’s ok for you to do it. I mean, it seems he went out looking for attention and he did ask the sergeant to educate his officers, so why not give a helping hand?

The sergeant isn’t free from blame in my opinion, either. Firstly, he is responsible for his officers and he should make sure that they are aware of the laws. He’s at least partially responsible for them harassing the drone operator. Also, when asked to educate his officers he simply responded that it’s a new area and that there’s no legislation regarding drones. Law enforcement officers are supposed to enforce laws, not their personal views. This means that if there’s no law against drones and the FAA has not regulated drones, officers should be made aware that they have no right to interfere with such activity.

I know some will say the people involved in such cases are just the bad apples, both among law enforcement agencies and among photographers/videographers of all kinds, but it feels like there are too many of these bad apples.

It’s getting to the point where the not-so-few bad apples are ruining it for the rest of us. Every confrontation like this one just motivates haters to push harder for laws and regulations against photography, drones, etc.

These incidents don’t help police’s terrible reputation either or help build trust with the communities they are supposed to serve.

So, how about we all just do our best to get along?