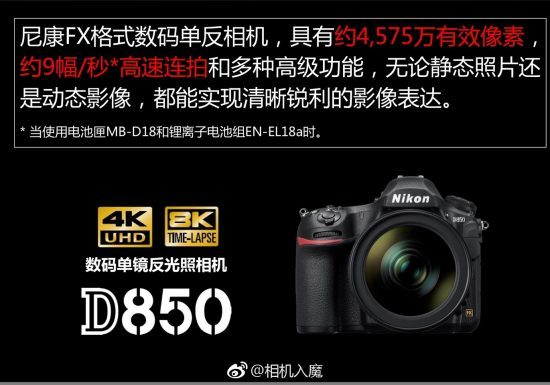 According to a report on Nikon Rumors, the presentation slides of the recently announced Nikon D850 have leaked in China earlier today. They show photos of the camera itself, as well as the sample images and additional specs to those we already found out.

You can out more photos on Nikon Rumors, as they have as much as two posts of these slides. Although they are in Japanese, we can see the images and conclude some of the specs. There is even a (Google) translation of the slides, but if there are any Japanese speakers among you, feel free to help us out.

Anyway, here are some of the specs that are now confirmed (and that I could figure out from the rough Google-translated text):

In addition, the slides mention that the camera is suitable for sports photography, astrophotography, macro and architectural photography, and in quiet environments (probably to refer to the Quiet shooting mode). Also, it seems that Nikon D850’s Natural Light AWB setting will be able to capture more saturated and realistic colors. There is also scene recognition feature, and some image enhancement features to fix the photos in-camera.

To check out all the images, head over to Nikon Rumors and see the part one and part two of the sliders. And hopefully, we’ll find out more about the camera soon.