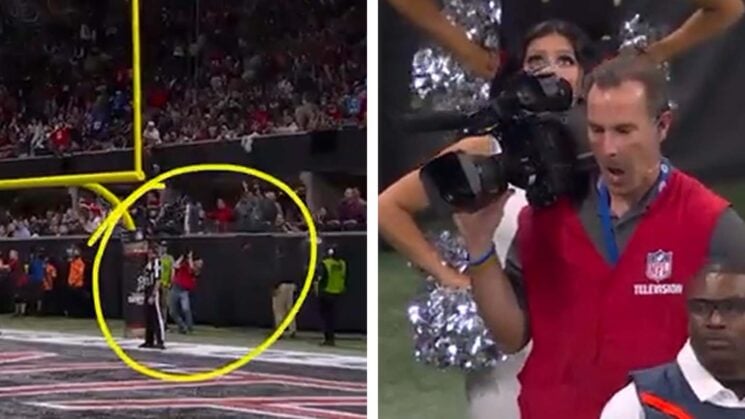 Incidents and injuries are pretty much an essential part of contact sports like football. But the thing is – even those outside the field sometimes get hurt. NFL cameraman Don Cornelli recently got a ball straight into his face. Still, he kept his cool and just kept on filming, and it was all caught on camera.

Cornelli was filming a football game between the Patriots and the Falcons on Thursday evening. As Patriots kicker Nick Folk kicked a 53-yard field goal, he placed himself so that he could catch the ball coming through. And he did catch it: with his face. I love it how he makes a hand gesture that says “Nah, it’s nothing,” and just smiles it off.

"He has a way of always being in the right spot."- Troy Aikman

"That's what gets you in the Hall of Fame. That's what the great ones do."- Joe Buck pic.twitter.com/99IDqZ5dX8

Here’s the shot from Cornelli’s angle:

While this video brought back ugly memories from gym class for some of us, it looks like it’s “just another day at the office for Don Cornelli,” as the broadcasters commented. No wonder he is being inducted into the Sports Broadcasting Hall of Fame next month!

« It took 20 hours to cut this SMC Takumar 50mm f/1.4 lens in half and it’s a thing of sheer beauty
Photographer Jock Sturges admits historical case of sexual misconduct »