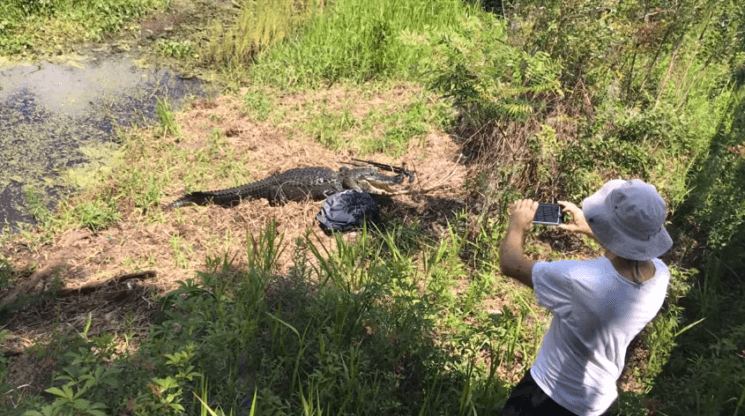 Watching some photographers’ behavior in nature makes me wonder – are they into wildlife photography, or into becoming a lunch? This guy was incredibly close to getting bitten by an alligator, but did it stop him from shooting – nope, it didn’t.

YouTube user Ben Boukari posted two videos of this persistent man who was trying to get the shots of an alligator from up close. The animal started chasing him a couple of times, it bit his tripod and lied on his camera bag – but he just went on shooting.

The videos were recorded at La Chua Trail at Paynes Prairie in Gainesville, Florida. As Mr. Boukari writes in the video description, this is an angry mama gator who was trying to defend her babies:

The gators normally layout in the sun and are very calm. This guy got off of the trail and decided to try and get a closer look a mama gator and the babies. Everyone heard in the video are in a safe location on a boardwalk above the gator.

At the very beginning of the first video, the gator rushes towards the man. I think the insane amount of luck was needed for the man to escape, and the only legs the gator bites are those of the tripod. But is the lesson learned? No, as it turns out.

The man takes his smartphone out and goes on shooting the alligator. Despite a few more attempts of the animal to chase him off, he just doesn’t give up. The gator even attacks when the man tries to get his gear back, which is no wonder as he got too close again. And since it’s not filmed, I do wonder if he managed to get his camera bag and the tripod back, or he is still standing there, filming the gator with his phone and waiting the chance to grab his gear.

I’m curious to know what makes a person do something like this and be this stubborn even in a situation where their safety is endangered. Although this isn’t as big as an alligator can get, I still think it would be fairly painful if it grabbed him with its strong jaws. Since the guy was persistently shooting with his phone, I can only guess it was for the likes and admiration of his Facebook friends. And it’s certainly not a good reason to risk your life (or at least your limbs).

Pig bites Instagram model on the b… beach. What’d you think I was gonna say?