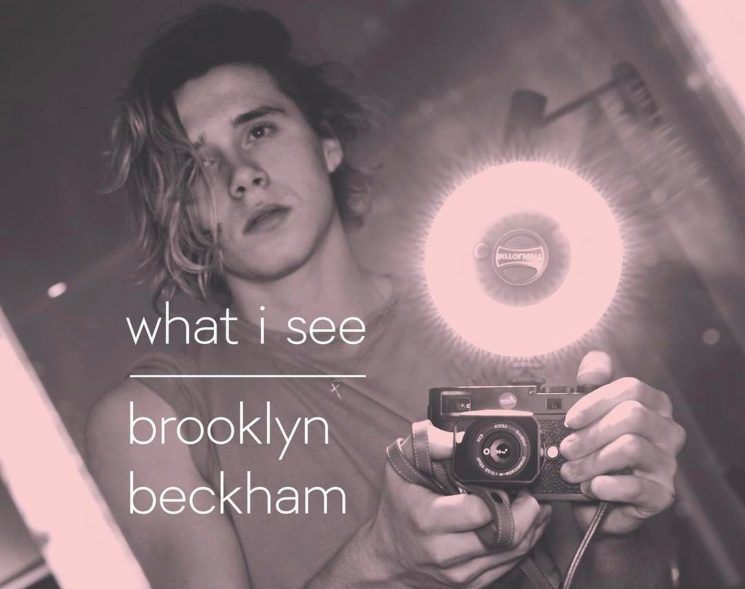 Brooklyn Beckham, the eldest son of David and Victoria Beckham, has his first photography book issued tomorrow. The 18-year-old (amateur) photographer hasn’t even signed the first copy yet, and the critics are already bashing him, the book and his work.

The book titled “What I See” will be released by Penguin Random House UK. And while the critics, professional photographers and one part of the public seem pretty furious about it, the publisher and Brooklyn’s fans try to defend him.

Young Beckham was first on the strike of criticism when Burberry hired him to shoot their fashion/beauty campaign in 2016. At that time, fashion photographer Chris Floyd was one of the professionals who criticized Burberry’s choice, telling The Guardian that it devalued photography and “showed a lack of respect for hardworking, experienced professionals”. So it’s no wonder that the book wasn’t really received with approval either.

What I See is described as a series of snapshots of Brooklyn’s life. According to the book description, each chapter tells a different story. There are 300 images in the book, along with the captions that tell the story behind them. Arts Editor of i newspaper Alice Jones had a tweet about these photos and captions, which caused a lot of different reactions. She posted two photos of the book’s content, along with her comment that reads “Huge fan of Brooklyn Beckham’s terrible photographs and even worse captions.”

A lot of comments followed, and they take different sides. There are many people who see this as injustice, claiming that only the family he was born in could bring Brooklyn the book deal. The others are on Beckham’s side, supporting his artistic development. Managing Director of Penguin Random House Children’s, Francesca Dow, defended the book and the author as well. She told The Independent  “What I see is a book for teenagers, by a teenager, which gives Brooklyn’s fans broader insight into his world seen through his unique and creative perspective.”

Just like someone is judging and someone is defending Brooklyn Beckham, my opinion about the whole situation is also two-sided. Frankly, I’m  unimpressed by his photos, to say the least. I’m sure he’ll grow and develop as an artist, that’s not even an issue. But I don’t see his images as a book material just yet. And it seems unfair that so many better photographers will never get to publish a book because they weren’t born with the right last name.

But on the other hand, I can’t be too judgmental and I don’t feel bitter – because I try to put myself in his shoes. I don’t think being a child of a famous person (especially of two famous people) is all sunshine and roses. You have to do something to stand out and leave your parents’ shadow. And in his case, I’m sure it’s not easy. So even if his last name was the one to bring him the book deal, I hope he’ll be grateful for that. And I hope he’ll continue to take photos, hone his skills and find his spot in the world of photography – but as a photographer, not as a Beckham.

« Lensbaby launches Velvet 85mm f/1.8, a lens designed for soft portraits
Angry alligator almost bites photographer – but he keeps on shooting it with his phone »