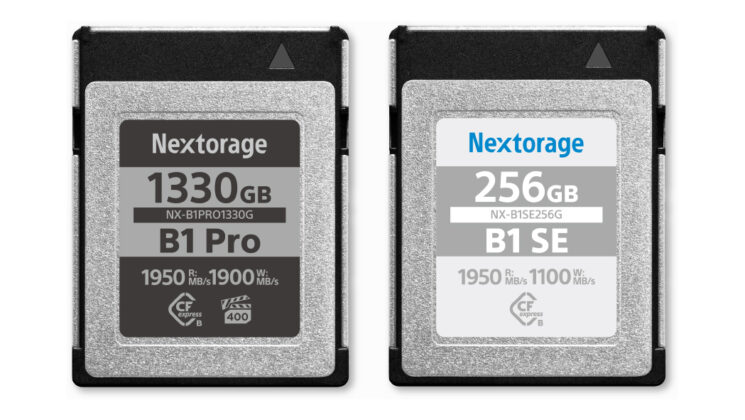 Nextorage has announced its new CFexpress cards. Claiming to be the world’s fastest, with read speeds of up to 1,950MB/sec, the B1 SE and B1 Pro series come in a variety of capacities from 128GB up to a whopping 1,330GB. Shifting its focus towards creatives is an interesting move for the Sony subsidiary founded in 2019, which initially seemed predominantly targeted towards Playstation users.

The two new CFexpress product lines are aimed at different types of users. The B1 SE aimed more towards photographers with an 1100MB/sec write speed for clearing out buffers, but with transfer speeds like that, it’s no slouch for many video shooters, too. The B1 Pro, on the other hand, provides writing speeds up to 1,900MB/sec for faster buffer clearance and 8K video recording at high bitrates.

The Nextorage B1 Pro series of cards are big and they’re fast. They come in capacities of 165GB, 330GB, 660GB and 1,330GB. All four cards offer read speeds of up to 1,950MB/sec and write speeds of an extremely impressive 1,900MB/sec. With a minimum sustained write speed of 1,800MB/sec, these cards naturally support the VPG400 spec that requires a minimum sustained write speed of 400MB/sec, but these cards can go much higher than that.

These cards are designed for very high rates of data acquisition, such as shooting 8K video at high bitrates or continuous raw stills shooting in big bursts that need to be cleared out of the buffer quickly. There’s nothing worse than shooting an important event to find you’re waiting on your cameras to finish writing out data before you can continue. 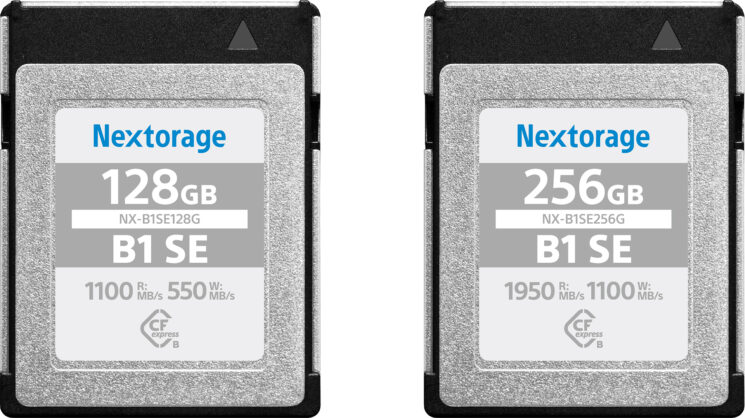 For less demanding users, there is the Nextorage B1 SE series. These come in capacities that many of us would be more familiar with, like 128GB and 256GB. The read and write speeds here are a little lower than the B1 Pro series, naturally, and differ by card capacity, too. It’s also worth pointing out that these cards don’t meet the VPG400 specification, although they’ll still suffice for many cameras and uses.

Nextorage says that both the B1 SE and B1 Pro cards are durability tested to comply with CompactFlash Association regulations, which means they’re good from -10°C up to 70°C, shock resistant, X-ray resistant, UV resistant, magnetic resistant and anti-static to help ensure a long and happy life. The B1 Pro series also incorporates Nextorage’s “Dynamic Auto Power Safe” feature, to give up to a 68% reduction in power consumption. This also generates less heat and helps to prevent thermal throttling – who isn’t sick of camera overheat warnings by this point, am I right?

They say that they’re currently in the process of testing device compatibility and have tested specifically with the Canon EOS R3, EOS R5, EOS R5C and Nikon Z9. Information on other devices will be published on the Nextorage website as it becomes available. Given the list of devices they’ve tested their microSD cards with, I expect it won’t be long before we see that CFexpress compatibility list growing pretty big.

« The only photo of Neil Armstrong on the moon could fetch $30,000 on an auction
This is where you can bring your camera in San Francisco and not get it stolen »