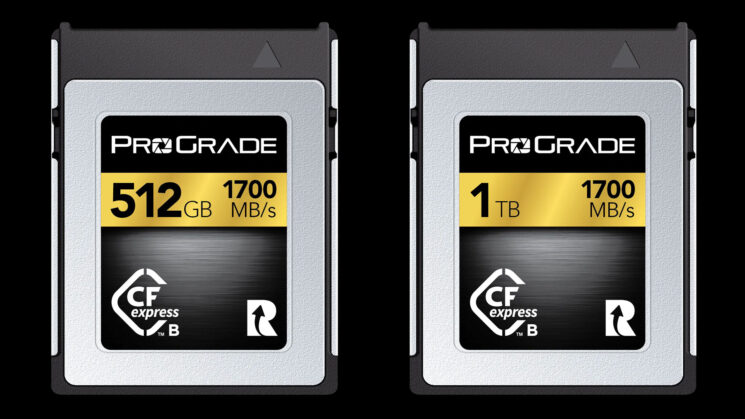 ProGrade Digital has announced (maybe?) new high-capacity additions to their Gold line CFexpress Type B cards. These include the now somewhat modest 512GB cards, along with larger capacities of 1TB and 2TB. They’re fully compliant with both CFexpress Type B 1.0 and 2.0 specifications and also work with devices that have XQD card slots that have had firmware updates from the manufacturers (like Nikon’s DSLRs).

The new cards offer read speeds of up to 1700MB/sec for quickly offloading your content to your computer or other storage device and write speeds of up to 1500MB/sec – with a guaranteed minimum write speed of 400MB/sec (3.2gbps) for a wide range of video applications including 4K RAW, 4K and 7K ProRes 4444 as well as 4K, 6K and 8K ProRes 422HQ. 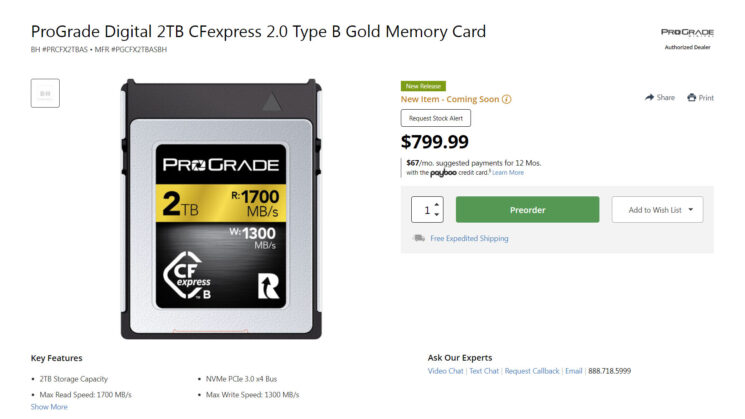 The listing at B&H for all three new capacities of ProGrade Gold CFexpress card have since disappeared.

According to the product description, like the rest of the Gold range, the new cards are resistant to temperature extremes, shock, vibration and X-Rays for maximum durability in harsh shooting conditions. It also has a metal enclosure to help disperse heat as quickly as possible while shooting to prevent overheating.

The cards go through what’s described as “rigorous full card testing with serialised tracking of key components and manufacturing data” for the ultimate in quality control with component-level testing right down to the individual memory chips. This isn’t a new thing for ProGrade. It’s pretty much what they’ve always done, which is why their cards are generally so reliable. The new cards also feature an NVMe host controller interface for backward compatibility with CFexpress 1.0 devices and Refresh Pro to monitor card health and refresh the card performance when needed.

Oddly, while the new cards were listed on the B&H website, they no longer appear to be. I expect they’ll come back soon, though, and I’ll drop links below for when they are. Also odd is that the ProGrade website doesn’t actually list the 2TB capacity card, although the 512GB and 1TB cards are listed on the Gold line CFexpress product page – and both of those capacities are listed as “sold out”, so it looks like they haven’t opened up pre-orders yet.

The ProGrade Digital Gold line CFexpress Type B cards should hopefully be able to order soon in 512GB, 1TB and 2TB capacities for $179, $399 and $799 respectively. No word yet on when they’re expected to ship after they do.