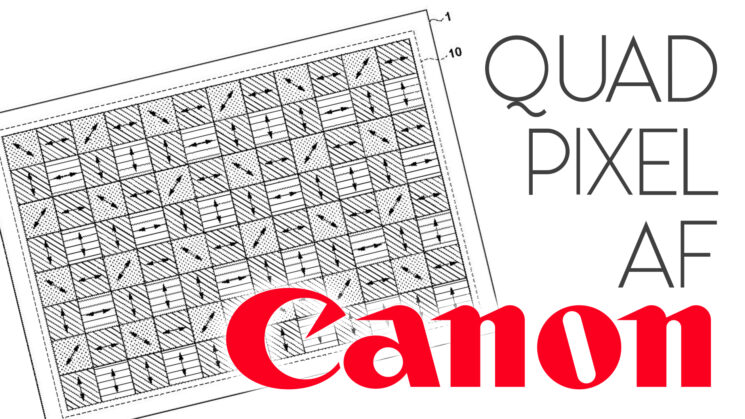 Since the announcement of Canon’s Dual Pixel Autofocus system, introduced with the Canon EOS 70D, we kind of knew that Quad Pixel Autofocus would be inevitable eventually. Several new patents have been released over the last few years, including this one from 2020 suggesting that it might come with the EOS R1. Now a new patent from Canon about Quad Pixel AF adds more fuel to that EOS R1 fire.

Dual Pixel AF is pretty awesome, as evidenced by the significant lack of auto-backfocus jokes we used to regularly hear about Canon DSLRs. And while it’s not perfect, it seems to be leading the way lately in some respects. But Quad Pixel AF should help to make Canon’s EF more reliable and accurate than it has already become, posing a serious threat to the competition.

Dual Pixel Autofocus tech essentially works by splitting each pixel into two photodiodes. A processor in the camera then analyses two images at once in order to determine which way to focus the lens (forwards or backwards) and how closely it’s hit its subject. It’s not perfect, and still fails in certain situations, but it’s certainly better than the old way. Where Dual Pixel AF mostly fails is when you have edges running perpendicular to the front face of the sensor. Both pixels essentially see the same thing.

Quad Pixel Autofocus could potentially solve this issue, adding reliability in such scenarios – a handy thing if you need to act and shoot fast – by not only providing extra pixels for comparison in a second axis but also diagonally in either direction. In theory, this could not only be a big game-changer for Canon but potentially upset the camera market completely with companies that fail to keep up in the autofocus department. Especially when it comes to video *cough*Panasonic*cough*.

A year ago, ideas of its potential use in a hypothetical EOS R1 might have seemed a little premature, especially as it wasn’t even the next camera Canon ended up announcing, but now, there isn’t much room in the EOS R lineup for a camera for a new body that would really justify this level of tech as its introduction to the world – and Canon has said the EOS R3 is not its new flagship, so there is one on the way.

It is also possible that we might not see this in an EOS R1 first, though. Canon might actually be making a high-end APS-C RF mount follow up to the Canon EOS 7D Mark II. Given the sports and wildlife advantages of that camera, it would certainly benefit from and be a viable contender to launch such a technology.

You can read the complete patent here.