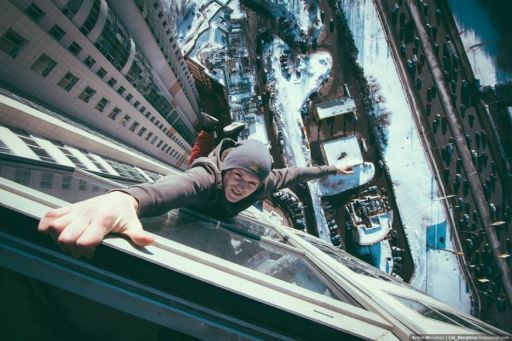 I was never a big fan of Planking, that thing where people take their photos while lying in dangerous places. I am even less of fan of this apparently new Russian fad, yet to be unnamed:

Taking videos and photos while hanging over buildings, construction sites and other high locations.

A performance artist that goes by the handle Mustang Wanted performs those death defying balance acts on almost anything high tower he can lay his hands on (pun intended). OK, I am not sure that performance artist is the right title, but I could not come up with anything better.

MW also mentions that he has finished shooting a documentary on his adventures. I would love to what motivates anyone to pull off anything like that.

Am I the only one who thinks this is totally crazy?

« How to Develop Film With Lego Mindstorms
Fuji Does It Again, Applies For Varying Pixel Size Sensors »